Detailed Tank Predictions for the "Subpar 6"

Share All sharing options for: Detailed Tank Predictions for the "Subpar 6"

I updated my Vegas ratings this morning. The Warriors are in pretty bad shape on the court, but good shape with respect to their chances of keeping that lottery pick. Read on for the nitty gritty. 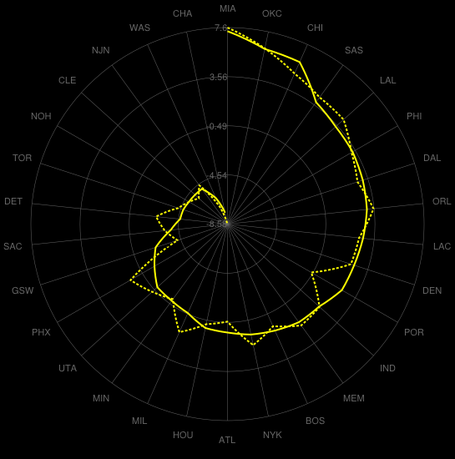 That's a tough schedule. Only 1 projected win from here on out.

Detroit has the easiest remaining schedule and 5 predicted wins.

As of right now, it looks likely that we will definitely pass Detroit. In the following table, CW = current wins and PW = projected wins based on the above results.

In case of tied records, you may be interested to know how things are settled (perhaps, not what you thought):

In the event that teams finish with the same record, each tied team receives the average of the total number of combinations for the positions that they occupy. In 2007, the Minnesota Timberwolves and the Portland Trail Blazers tied for the sixth worst record. The average of the 6th and 7th positions in the lottery was taken, resulting in each team getting 53 combinations (the average of 63 and 43). Should the average number not be an integer, a coin flip is then used to determine which team or teams receive the extra combination(s). The result of the coin flip is also used to determine who receives the earlier pick in the event that neither of the tied teams wins one of the first three picks via the lottery.