Tank Status 4.5.12: Damaged But Not Destroyed

Share All sharing options for: Tank Status 4.5.12: Damaged But Not Destroyed 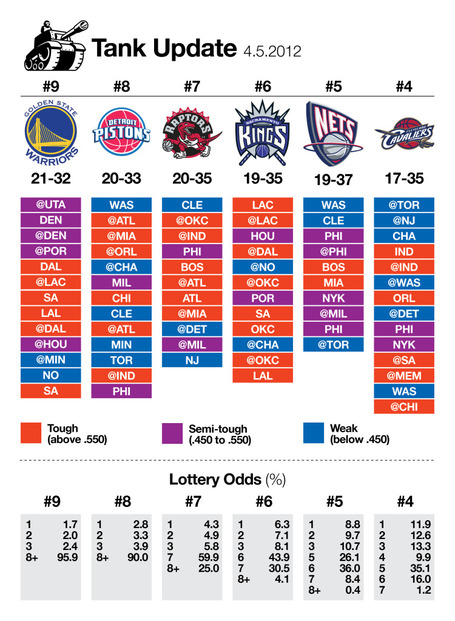 Ouch: last night's "heroic" comeback from 20 points down did serious damage to the tank. We had a flat-footed tie with the Pistons and a win-column tie with the Raptors in the palm of our hands, and (with apologies to Bob Dylan) we must have been mad, we never knew what we had, we threw it all away...

Still, the resulting outlook isn't totally bleak. The Pistons have a great shot to move to 21-33 tonight with a win against the Wizards, who may still be without Nene and Trevor Booker. The Raptors, who have been playing monster D lately under Dwayne Casey (22 points allowed in the second half yesterday v. the 76ers!), can also move to 21 wins tomorrow with a win at home v. the Kyrie-less Cavaliers. After that the road gets a bit tougher for both of them, but probably not as tough as our remaining road. The Pistons in particular have some seriously Charmin-soft spots in the schedule: by my count, seven eminently winnable games: at home v. WAS, MIL, CLE, MIN, TOR and PHI, and on the road against CHA. The Warriors' solid play lately does have me concerned (er, I mean excited for next season!) But at this point I'd say the chance of the Pistons passing us looks better than 50/50.

As for our other three "competitors" ... well, with Kyrie Irving's shoulder injury now likely to keep him out for at least 10 more days, I think it's almost time to strike the Cavs from the chart. They look like a lock for the #4 spot, if not the #3 spot currently occupied by New Orleans. The Nets have a reasonably easy remaining schedule, but with only ten games left and five more losses than we have, they're really going to have to make hay to get within range. The Deron/Wallace combo makes it possible, but unlikely, imho. The Kings have been playing rather well lately (Isaiah and DeMarcus in particular) but they still stink, and their remaining schedule looks about as tough as ours. Their three games against OKC are particularly irritating.

Overall: if we can stick to 23 wins or worse, I think we still have a realistic shot at the #7. 25 or more and we can probably bury the tank. You'll note that I've added lottery odds to the tank chart, just to remind us what exactly we're tanking for.

Yes, if we snag the #7, we'll still have to convey next year's pick to Utah, but I think it's reasonable to imagine that that pick will significantly lower than #8-9. And beyond the question of the #7/8 threshold: I think a nearly threefold increase in our chances of landing a top three pick (in what Matt Steinmetz considers a three-player draft) is worth a whole heckuvalot more than a few meaningless late-season wins. And so the tank rolls on...