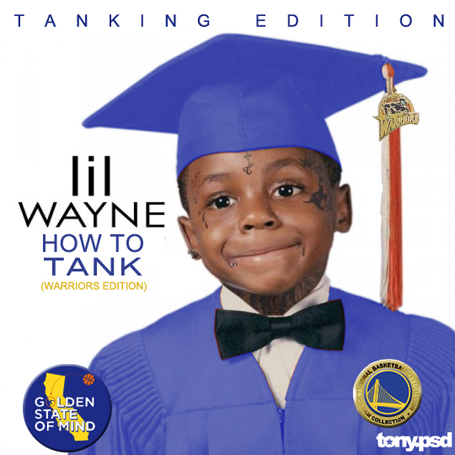 "Tanking" seems to be a majority favor amongst Warriors fans these days. Don't get me wrong, I am not against it, just getting used to the chatter. For example, when the Warriors beat the Timberwolves last Wednesday it was the first time I saw people on Facebook and twitter post comments like "Dangit! I can't believe our Warriors won! Argh! We shouldn't have lost!" I was at Chevron gas station yesterday and overheard a customer tell the cashier "Yea, the Warriors won last night, I wanted them to lose so bad!" It's become the norm in the Bay Area... Tanking never sounded so good!

So, since winning would be pointless and the chance of getting a high draft pick seems likely, I'm not even going to hype up a possible Warriors victory. Let's blow it and take a loss! With a better understanding on what "tanking" is, I guess you can say I'm hopping on the tank and we're headed to Utah to face the Jazz! The thing is, Utah is having their share of woes with a losing streak of their own. They still have a shot at the 8th spot and they're fighting for it! Now for us Dubs fans, we'll take the loss!

Notes/Predictions to feed the tank:

- David Lee, he's our man of the hour right now. Following a season high 31 points in his last game against the T-wolves, he's headed to Energy Solutions Arena to post up some big numbers! As for a win, who knows, the Jazz are hurting as much as us with their line up. It's anybody's game.

- For Golden State, outscoring Utah is the key. The Jazz have given up an average of 34 (first quarter points) in their past 4 games. We've seen the Warriors choke in the second part of back to back games so tonight can spell disaster. It's all good though, it's all about tanking! (so they say)

- We're seeing more of Klay Thompson shaping up to be a really fun player to watch! He's averaging 17.6 points in the last 15 games. Guilty pleasure to see our talents improve.

- Look out for the Jazz's Derrick Favors who lit up the stat charts with 23 points - 17 rebounds against the Dubs in their last visit to Utah.

- Devin Harris looks like he's listed as injured with a sprained left ankle. Suiting up tonight is unlikely.

- Golden State's a short handed team. Let's see what the young fellas can do. If it equals a win, cool. We gotta stay the course and continue tanking it though!