Share All sharing options for: A Ranking of Golden State Warriors Scorers in the 3-Point Era

Amidst all this talk of tanking lately, I thought it would be nice to mix it up a bit and throw some Warriors-related stats and history at you today. Recently at my blog, I've been working on a new scoring metric. It's a relatively simple combination of TS% and USG%, which thus tries to account for both efficiency (TS%) and volume (USG%) simultaneously, and does so in (I think) a novel way. Here, I'll use this new metric to do a ranking of Warriors players since the 3-pt shot came into effect, and I'll also throw in a table showing just this season. I don't mean for this to be controversial, even though I'm sure some of you will disagree with the list. But hey, it might be fun arguing about something other than our next win, er, loss.

Read the full article linked to above for the details, but the basic idea is that I calculate a "distance" for each player on the TS% vs. USG% graph to the line shown in the following plot: 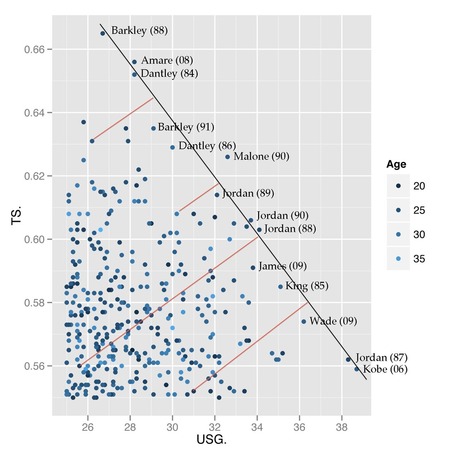 My "working hypothesis" is that this line represents truly great scoring seasons, a theoretical upper limit on scoring, if you will. To put the rating into some context, I made it so that the maximum is 1.0 and an average player would be 0.0. A below average player will be correspondingly negative. With that said, here is a list of the Warriors players on the list over the past 3 decades or so that had over 500 FGA in a season.

Go to the Google Spreadsheet