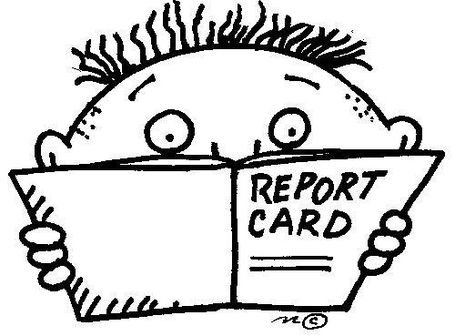 Do you get this wide-eyed when you look at your report card?

As usual for Warriors fans, the end of the season means looking forward to the ping pong balls, enviously watching teams that are in the playoffs, and a report card!

Including preseason, Curry's season was disrupted by four ankle sprains and one tendon strain. We're at the point now where every time Curry makes an aggressive move, we cringe at the possibility that he'll hurt himself again. I know when training camp starts next season, I'll be watching his moves, speed, and mobility. And I'll have my fingers crossed that he doesn't suffer ankle sprain #9.

It's hard to grade someone who had to deal with 5 injures in one season, but here goes: Looking beyond the injuries, I saw the same sloppy things out of Curry that I saw last season that had Keith Smart benching him: one handed telegraphed passes, lazy entry passes, and unfocused plays during crunch time. Curry may be a great shooter and a skilled passer, but if he doesn't mentally clamp down and sharpen up these little elements of his game, he'll end up being nothing more than a rotation player that can shoot, instead of a go-to player that can take charge and lead us to wins.

Last season, DWright made a living off of catch-and-shoot 3s and his pump fake. This season, nobody bought the pump fake, and he wasn't hitting his 3s. I suspect Mark Jackson wanted him to expand his game, and that threw DWright out of game rhythm. We saw how bad DWright was at finishing around the rim. I predict he'll be a bench player next season if he isn't traded.

Once Monta was traded, and with Stephen Curry injured, somebody had to put up the numbers. And David Lee put up some pretty good numbers in the tanking stretch of the season. But to Lee's credit, he wasn't playing just to put up numbers. He played to win and to set an example for others that you always play to win, even in a losing season. For that, I had to bump up Lee's grade from what would have been a B to an A.

He started out well in Game 1: 10pts, 8 reb. We thought the old Biedrins was back. Alas, that would be his highest scoring game of the season. As with his last couple of seasons, Biedrins hid himself on offense, avoid demanding or even looking for the ball, and didn't fight for offensive rebounding position. When Mark Jackson talked about some players "going through the motions", I had no doubt he was referring to Biedrins.

So why the plus? Because despite his lack of contribution, he did ONE thing useful this season: Mar 17, Warriors @ Jazz, Jazz down 3, 0:30 left in the game. Jazz run a pick and roll with Devin Harris and Derrick Favors. You don't want to give up a 3 to tie the game. So what does Biedrins do when Favors rolls in for the dunk? He fouls him for a 3pt play! Jazz tie the game and beat the Warriors in OT, which inspired this pic: 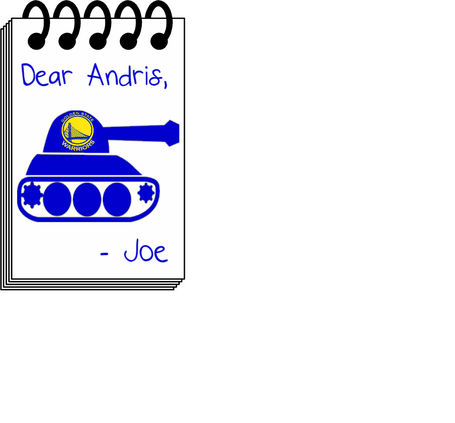 That's right! I gave Biedrins a "plus" because he inspired the Tank Commander poll, which was one of the few sources of laughs and entertainment left for us late in the tanking season. Way to go, Biedrins! ... sigh. He has two seasons left on his contract (one guaranteed + one player option). If he had any decency, he'd opt out of his last year and get out of the NBA forever.

I think Klay was the player who improved the most since the beginning of the season. He went from clanking shots to finding his shot, to curling around screens, to driving to the hoop. He was a nightly threat of destroying the tank. I wonder what he'll learn next.

Feast or famine. Hot or cold. Love him or hate him. And a ball of energy. That's what we saw out of Nate. When he was on a hot streak, he helped turned some games around. When he's on a cold streak, you wonder why he's in the game. I credit him for for being a microwave off the bench, but I can see why some teams got tired of his antics, particularly those that are focused and trying to win. We probably won't re-sign him unless there are no other alternatives.

Rush was the brightest spot off the bench this season. He was on fire from outside. He's learned to put the ball on the floor and drive. He's big and athletic enough to defend players and block a few shots. And he kept threatening to destroy the tank. We definitely need to keep him.

Nice defensive specialist who guarded a variety of positions when nobody else could. Any shot that he made was considered a bonus. So was stepping into emergency ball handling duties.

Maybe Jefferson was shocked at being traded from the playoff Spurs to the go-nowhere Warriors. Maybe he's not used to coming off the bench. Maybe he just sucks. Whatever the reason, we got very little out of Jefferson, which is great for tanking but not helpful if you want to win. I think he's going to be the starting SF next season, so maybe he'll play better then. If not, trade him.

Affectionately known around here as "Jenksanity", he was our version of Linsanity: A unknown bench guard who blew out everyone's expectations. Jenkins took advantaged of his minutes from Curry's absence and Monta's trade. He ran the point guard position, hit the long 2s, made some nifty drives, and always threatened to destroy the tank. Definitely worth putting in the rotation to see how far he can develop.

Still very raw, but hey, he's 20 years old. Late in the season, he showed some improvements with some patient moves and even a couple of skilled athletic moves.

We didn't see much of Chris Wright because Mark Jackson didn't play him much and because he played in the D League for a couple of stints. From what little we saw, Chris Wright is very athletic and has some crowd-pleasing dunks. But the game isn't just about dunks. I suspect CWright's understanding of the structure of the game is very raw and needs a lot of development, which would explain the D League stints and the lack of playing time. Until then, he's not a useful NBA player, and I would have given him an F had it not been for his eye popping dunks.

We signed this undrafted rookie in mid-March to evaluate him and to fill in the front line once we traded Ekpe Udoh. The main highlights from Gladness was shot blocking, which was reminiscent of Ekpe Udoh's shot blocking. Beyond that, he didn't contribute much else. We could keep him around as a shot blocking specialist off the bench and try to develop the rest of his game.

OK, that's obviously a joke grade. Moore was signed on to fill in as a big body late in the season when the injuries started piling up. Didn't expect much out of him. Didn't get much out of him. Probably won't see him again unless we're hit with another injury curse. I don't really have a grade for Moore because it won't matter.

Andrew Bogut: A for attitude

We're gambling that Bogut will recover from his injury and become this really good center I keep hearing about next season. But for this season, all we got out of him was some interviews and some nice shots of him wearing a suit...

... and some really attitude-filled sarcastic insulting tweets at those who criticized him for needing to go through another surgery. Those tweets have since been deleted, and I think Bogut was venting because he was upset at missing out on playing in the Olympics. But that's the kind of toughness and attitude we'll need on the floor next season.

I really had to think hard about this one.

On the one hand, this was Mark Jackson's first season as a head coach, not to mention his first season of any coaching experience. It was the first season this coaching staff had worked together. It was a shortened lockout season with a shortened training camp and little practice time in between each game. To MJ's credit, during the 1st half of the season when we were trying to make the playoffs, we didn't have many bad, blowout, disaster of a game. When we did, the players bounced right back the next game and put in a much better effort.

But on the other hand, whenever the camera shows a play being drawn up, it's always Mike Malone that's drawing up the plays, not Mark Jackson. It makes you wonder how much play design skills MJ really has. To MJ's credit, he's not afraid to step aside and let Malone draw up plays if Malone is the best play designer on the staff. But the problem is that if Malone finds a head coaching job this summer, what will happen to our offense and our plays? In other words, MJ has not yet given me any confidence that he can design an offense with the players that he has.

Furthermore, towards the end of the season, I started tuning out Mark Jackson's practice/postgame/radio interviews, because MJ basically says the same thing with the same catch phrases in each interview: "We're a no excuse basketball team." "We battled, we competed, we showed energy..." And he always talks like a preacher (which he was), or a salesman - always trying to convince and sell you some positive angle: "Here's a guy who <insert sad situation> and now he's <insert heroic situation>."

Now, maybe those are just the style and habits from being a preacher or from being a broadcaster where he's used to speaking in sound bites. It could also be that he wanted to avoid generating any drama and media conflict on his first season as a head coach, so he sticks to giving safe, vague, dumbed down answers for the media and the public. But what concerns me is that if MJ uses the same style and approach with the players, players might start to tune him out too, especially if we're losing and missing the playoffs again next season.

So the grade that I settled on for MJ for this season was a C. Not bad for a rookie coach in a shortened season, but has areas that need to be improved.

No matter how many losing seasons Warriors fans endure, GSoM commenters can always be counted on to bring the attitude, cleverness, and wit to each game thread. On nights when the Warriors were lifeless, dreary, uninspiring, and unentertaining, that wit was all we had to pull us through to the next game and so on until the season finally ended. I know I've had to steal - er, take - er, copy - er, use some of those lines for titles and poll choices. Keep that wit coming.

The biggest news of this season: The Warriors finally got a real center. The problem is that Andrew Bogut can't play until next season. I think the plan is that with shooters Stephen Curry, Klay Thompson, and Ed Undecided at small forward, and with David Lee stretching the power forward away from the paint, Andrew Bogut will have plenty of space to work with and options to pass to. Put in some defensive players off the bench to cover for the lack of physical defense by Curry and Lee, and we got a pretty decent team.

Next season better be worth the wait, because we had to endure a lot of ugliness this season.