[Open thread for picks 1 through 6. New threads will pop up for each Warriors pick... and trade!] 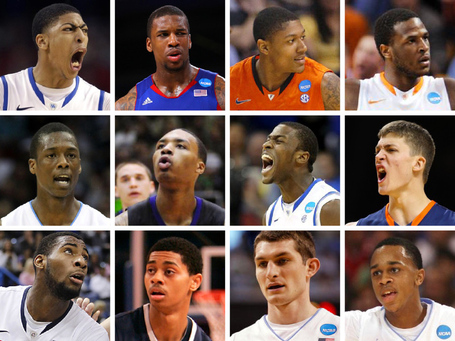 With the #7 pick, the Golden State Warriors select...

Two hours to go: as GSoMer Rasputin notes, we all wanna be sedated. Jump for five quick questions.

1. Is there any chance Michael Kidd-Gilchrist drops as far as #7? Bill Simmons and Chad Ford have pondered the possibility, but Marcus Thompson II rated the chances at 5%, which sounds about right to me. Fingers and toes crossed.

2. If MKG doesn't slip to #7, but slips to, say, the Cavaliers at #4, do the Warriors have the will and the assets to move up three slots? The will appears to be there, at least going by Jerry West's recent interview with Tim Kawakami and Matt Steinmetz, in which his stressing of the importance of toughness, drive and "dirtiness" all but conjured MKG in the flesh. Whether they have the assets to remotely tempt the Cavs remains to be seen.

3. Are the Warriors as hot for Dion Waiters — aka "Satin Weirdo" — as DX and other sites seem to think they are? Given the presence of Klay Thompson and Stephen Curry, and the likely re-signing of Brandon Rush, an offensive-minded scoring guard like Waiters seems to me like a sure smokescreen, but who knows. Both Jerry West and Bob Myers have intoned the mantra of "best player available." if they really think Waiters is that guy, maybe they pull the trigger and address the issues of defense, big man depth, and potential positional logjams at a later date.

4. If Andre Drummond falls to them at #7 — which seems entirely possible — do they snatch him up? Parsing the recent comments of West and Myers, it's hard to imagine a 3-4 year project with vast potential but questionable desire would be at the top of their wish list. But who knows: maybe Drummond's unquestioned physical freakiness makes him worth a gamble at #7. More likely, in keeping with the West philosophy of accumulating assets, I'd imagine they'd grab Drummond for his trade value alone and try to trade down for a couple of later picks, or a solid vet and a pick. (Jefferson + Drummond + #30 for Iguodala + #15, anybody?)

5. Is there a wildcard name at #7 that we haven't heard yet? Hmm. Though many of us on Golden State of Mind have discussed Meyers Leonard, I don't think I've come across a single mainstream site that have linked us to him. It's odd, since he's worked out for the team, has chatted personally with West, and seems to check a lot of the boxes: great size, fills a positional need, very athletic, fairly skilled but still loaded with upside, plays with lots o' fire. A bit of reach, perhaps, but when he's been linked to Detroit at #9, not an extreme one. I personally would be pretty cool with him as the pick (though not quite as excited as I'd be by Dirk's Megalithic Child, aka Michael Kidd-Gilchrist).

Overall, my desires more or less echo those of GSoMer Ivanbe: Kidd-Gilchrist, Iguodala, or a big man.

We'll be LIVE BLOGGING the draft for the 8th straight season. Post any rumors or comments until then in the comments section of this thread. Tick, tick, tick...