With the 5th pick in the 2nd round of the 2012 NBA Draft the Golden State Warriors select... 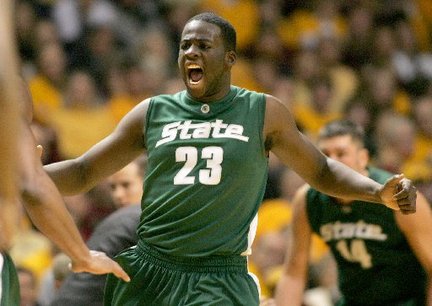 Love the enthusiasm! (photo via www.thebuckeyebattlecry.com)

This pick must've been too hot for TV or something because ESPN was on a commercial break when it was announced. Come on Draymond- show them how much they screwed up next season and beyond. Let's welcome Michigan State's all-time leading rebounder to the Bay!

According to the ESPN graphic only 3 guys have had multiple triple-doubles in the NCAA tourney- Oscar Roberson, Magic Johnson... and the Warriors 35th pick Draymond Green! That's incredible.

Take it for what it's worth, but here's my take after a quick skim of his draft profiles. Green seems to have all the tools- passing, shooting, and rebounding, but likely doesn't have that elite athleticism. He could be a nice bench player.

Stay tuned for the Warriors pick #52 and more!