Congrats to the OKC Thunder and Welcome to Loud City! 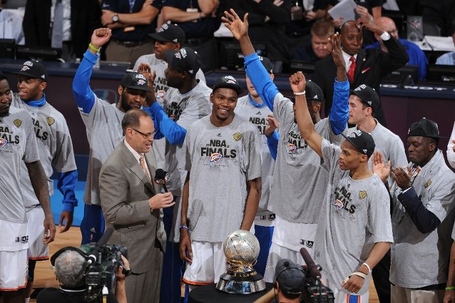 NO ONE would have predicted the Sonics/ Thunder to be this good 4 years ago. Anything can happen.

It's great to see a young, exciting, and hard working team go from the worst team in the league to beating the Dallas Mavericks, LA Lakers, and San Antonio Spurs in a single postseason to reach the NBA Finals. It's also great to see some fresh blood representing the Western Conference in the Finals. Since 1999 only 3 teams have come out of the West, oddly enough the My Little Ponies, Fakers, and Snores.

Whether it's the Miami Heat or Boston Celtics, I'm definitely hyped up for what will be a great 2012 NBA Finals. I'm rooting for the Celtics to close out the Eastern Conference Finals, but I'd wager a Thunder-Heat Finals would be the highest rated NBA Finals of all time. It's been a rough lockout-shortened season, but the final four so far has been superb.

Who do you have winning the Eastern Conference Finals? Give me some NBA Finals predictions in the comments also.