Since we have not formally written much about Draymond Green yet, I went to Las Vegas Summer League hoping to get people's thoughts on him.

So I'll be piecing something together about him based on interviews with Green, Charles Jenkins, and Jared Sullinger - who was probably the funniest guy I've interviewed in a while and had some interesting insight on Green from facing him in the Big Ten - early this week, hopefully tomorrow (I'm traveling back to the Bay Area today).

But in the process of going through some of the interviews I did this weekend and sifting through other notes to put together that story, I also had a lot of random thoughts and quotes that I won't use elsewhere that I thought 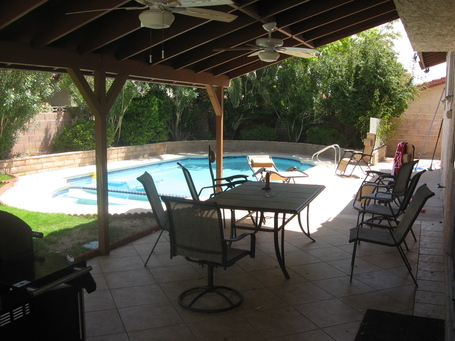 The backyard of the SBN house where we had one of the most ridiculous conversations ever on Friday night.

As I said above, I'll be putting together some more polished final thoughts on summer league performances over the next day or so but feel free to leave your thoughts in the comments. I enjoyed it and, based on some of your comments previously, glad that you enjoyed my coverage of it for GSoM this weekend.