The Golden State Warriors finished 5-0 at the recently completed Las Vegas Summer League, yet the implied consensus seems to be that the team's rookies weren't all that impressive in their first action with their new team.

Harrison Barnes, Festus Ezeli, and Draymond Green neither made the 2012 Vegas Summer League All-Star team nor did they even get an honorable mention on SB Nation writer Scott Schroeder's All-Rookie Team.

And although Barnes was mentioned as one of two players who will be "very good in their role" this year in Mike Prada's ranking of 52 rookies in summer league play, that he finished 19th - the highest of any Warriors rookie - might strike some Warriors fans as disappointing given that he was drafted seventh overall after an aggressive tanking campaign to finish this past season. The most positive account for any of the rookies thus far is on NBA.com's 2012 Rookie Ladder where Barnes came in 10th after the conclusion of Vegas summer league, falling behind five rookies drafted after him.

But one player that did make an impression was Charles Jenkins, who Shroeder listed as the top veteran point guard of summer league - given the pace of his rookie season and the absence of a summer league due to the NBA lockout, Jenkins had plenty to gain from summer league and he seized the opportunity.

"It was great for me," said Jenkins after the Warriors' final game against the New Orleans Hornets on Saturday. "It got me a chance to be a leader. I'm on a team with younger guys who haven't played in the NBA and are getting ready for it. So I was one of the vets on the team as far as summer league and trying to get them prepared and letting them know how things will work during the year."

Aside from the intangible benefit of learning to be a leader, Jenkins also seemed to take a step forward in one important way while still showing the need for improvement in another.

The following is a brief summary of the observations I made in my notes throughout the Las Vegas Summer League, starting with Jenkins and continuing with their draft rookies and a couple of others that stood out as potentially worthy of a training camp invite somewhere.

Wows: As Schroeder pointed out, Jenkins shot 51% during summer league, which was at least better than his 44.7% shooting last season even if summer league statistics don't exactly transfer well to pro success. The most impressive thing about Jenkins as a scorer was the aggression with which he attacked the basket.

Jenkins had an outstanding free throw rate of 65.11% (his ratio of free throw attempts to field goal attempts), which demonstrates an outstanding ability to get himself to the basket and earn scoring opportunities at the free throw line where he made 27 of his 28 attempts. His ability to drive and finish as a scorer was outstanding against summer league defenses.

Wonders: How important is developing a consistent 3-point shot to Jenkins' career? While the efficient scoring from the field was encouraging, Jenkins didn't hit a 3-pointer all summer league.

Worries: Despite picking up 4 assists without a turnover in the Warriors' final game, Jenkins had more turnovers than assists overall. He really appeared to struggle with pressure from veteran guards and rookies alike, which isn't exactly encouraging for what he might do against rotation-caliber NBA defenders.

Jenkins' scoring output alone is certainly something to continue building off of, but the Warriors obviously brought Jarrett Jack in because they felt they needed some help at point guard. The positive side is that working out with and practicing against Jack and Stephen Curry will only offer Jenkins more time to improve.

Wows: When Barnes gets his feet set, shoulders square and jumps straight up, he's an outstanding shooter. And when you look at the Warriors' roster as currently constructed, that could be a major asset as defenses focus more attention on the other scorers on the team. In addition to that skill, his activity all over the court at times when he was scoring is encouraging.

Wonders: Prada suggests that Barnes (and 8th pick overall Terrence Ross) is a player that will become a role player right away and might not progress beyond that and it's probably a reasonable concern.

Some of us thought it the moment he was drafted, but what could help him move beyond that level is a focus on becoming a better defender at the pro level, which could make him an excellent long-term complement to Curry and Klay Thompson in the starting lineup on the perimeter.

Worries: Barnes' ball handling was suspect at best and not only limited his ability to create scoring opportunities for himself, but also seemed to result in negative outcomes whenever he took more than one or two dribbles. It's not unreasonable to think he could improve in that regard, but right now that - perhaps even moreso than his tendency to take off-balance shots - is probably the biggest limiting factor in his ability to progress beyond a role player offensively.

Nevertheless, as I wrote the other day, Barnes did show signs of improvement in summer league and if that is any indication of his work ethic and attention to detail - rather than random variation or simply adjusting to the speed of summer league basketball - there is hope for him progressing beyond the level of a role player. 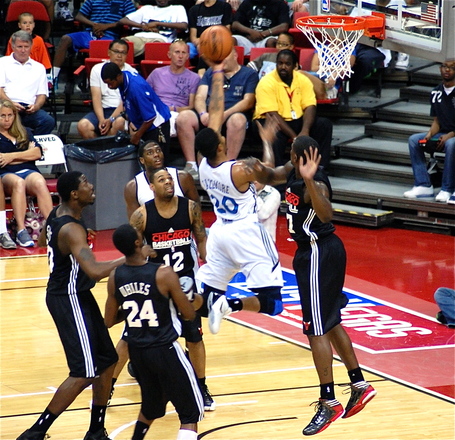 Wows: This guy is pure energy and over the course the past week, we saw him harness that energy and increasingly play under control on the offensive end. He seemed to figure out how to get himself to the line if he didn't finish at the basket in the Warriors' final game.

But where all that energy really made an impact was on the defensive end, where Bazemore had seven blocks in Friday's game. When he wasn't blocking shots, just his quickness and foot speed alone made him a solid defender.

Wonders: How good could Bazemore become with a consistent outside shot? Like Jenkins, Bazemore didn't hit a three at all during summer league play but showed reasonably good mechanics on this jump shot and obviously good lift. Evanz compared Bazemore to a poor man's Jeremy Lamb and if he works on his jumper he could fill that same "hybrid defensive stopper/shooter" role that Brian McCormick suggested for players like Jae Crowder, Perry Jones III, or Jeff Taylor.

Worries: Athleticism really stands out against summer league competition, but that alone does not immediately make one a NBA talent. At only 6'5" and with a few things to work on, it's very possible that he'll struggle to have a similar impact in regular season games.

Wows: His energy on the defensive end - really both in the paint and out on the perimeter - was solid throughout summer league and he came up with a couple of big blocks that really showed off some of his athleticism. And finishing with as many offensive boards as defensive (11 each in 5 games and about 96 minutes) is also worth mention.

Wonders: Where will he find a place in the league? I noted throughout summer league that I felt Burrell was outplaying second-year forward Jeremy Tyler* and a lot of that was on the defensive end. The difference: Tyler is under contract and Burrell isn't. It will be interesting to see where he gets invited to training camp and whether he'll be pegged as someone who can actually fill a gap in the depth chart or just be a training camp practice body.

Worries: The biggest problem for Burrell - as with many free agent big men in summer league, which tends to be dominated by ball handlers that are less than NBA-caliber distributors - was that most of his offensive opportunities came as an after-thought. But when he did get the ball in the post, there were times early on when he looked to be avoiding contact and later his jumper from mid-range just looked a little flat.

Wows: Ezeli played as well as advertised defensively, making himself a presence in the paint and blocking 10 shots in 5 games. He's extremely alert defensively and showed great foot speed in rotating over to help when teammates got beat (which happened far too often).

Wonders: How much better a defender can he become when surrounded by veteran players? Not that the Warriors are full of defensive stoppers, but it could be interesting to see how much more effective Ezeli is - particularly as a help defender - with more time to practice and learn a team concept with veteran players.

Worries: Prada ranked Green #37 among rookies in summer league and a primary reason is that he still has a long way to go offensively. He was 4-for-17 from the field entering the final game in which he was 4-for-5. To his credit, he showed some nice footwork in the paint but usually just couldn't finish the play by putting the ball through the rim. He's not as inept as people might make him out to be offensively - and he improved even over the course of the week - but he still has plenty of work to do. 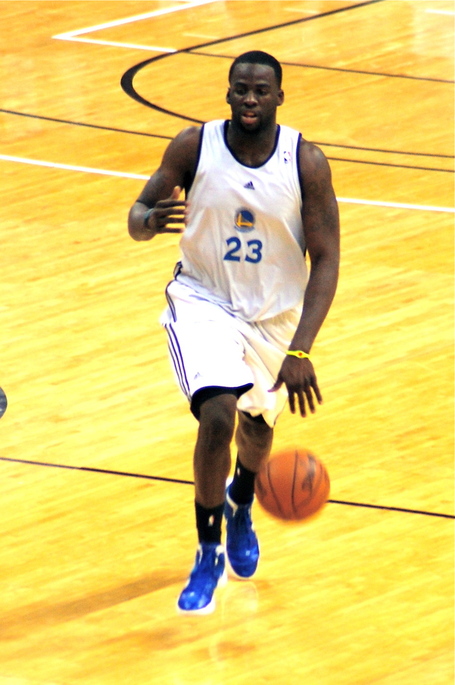 Wows: Green plays with a poise and intelligence on both ends that is rarely seen by rookies, summer league or not. I've already described what I like about Green in a brief piece on BallinMichigan.com.

Wonders: I don't think the question is so much what position he should play - it's clear to me that he should play power forward - as much as who he would be best playing with.

Worries: Prada knocked Green for shooting 3-for-15 from the 3-point line during summer league, but he did too much elsewhere on the court for that to really stand out over everything else he offers (and I find it odd that people are so surprised to see a forward who everyone considers a tweener and shot 3.6 threes a game in college shooting threes in summer league). He was a magnet for fouls in summer league but many of those calls were questionable. Nevertheless, there might still be some question about who he can defend and whether the active hands that Patrick Hayes of BallinMichigan.com said were an asset in college will be less so at the pro level.

Warriors Rookies Show They Can Fill Roles Right Away

But while each of the Warriors' rookies certainly has things to work on, summer league was still an encouraging start.

"I think guys really made adjustments, played well and played their roles and I think that's why we won games," said Green after Saturday's win. "But...it's summer league, it's just a start and we have to keep on building off it."

Green's observation about playing roles is particularly important for him, Barnes, and Ezeli who are all obviously more likely to figure into the team's plans than Bazemore or Burrell - they at least gave us a glimpse of what they could contribute right away, which is about as much as you can ask for in a summer league setting.

"I'm extremely proud of each and every one of them," Jenkins said of the Warriors' rookies. "From Festus coming in blocking shots and rebounding. Draymond with his all-around toughness, sacrificing his body, getting three charges the game before and got a charge tonight. Harrison bringing everything: his offensive effort and getting down and defending as well. They did a tremendous job."

Perhaps the Warriors' rookies didn't put up the best statistics during their time in summer league, but - as Jenkins pointed out - what they did show is that they all have the capacity to do the little things on the court that help teams win games, which could just be a few more steps in the right direction for a franchise that hasn't seen sustained success in decades.

*Note: I've already pretty much said all I have to say about Tyler here: you hate to give up on him, but he hasn't done much to generate optimism either.