The Golden State Warriors will take on the L.A. Clippers in a MLK Day matinee today at 1 p.m. PST at Oracle Arena with an opportunity to win the season series. But what, if anything, can we learn from the first three games of the series?

Share All sharing options for: Golden State Warriors vs. Los Angeles Clippers: Warriors try to wrap up the season series

I'm quite sure that had you told most fans before the season that the Golden State Warriors would have a chance to win the season series with the L.A. Clippers largely without the help of Andrew Bogut they would have been incredulous.

Today when the Warriors host the Clippers in a MLK Day matinee game at Oracle Arena, they'll have the chance to do exactly that - take the season series with the Clippers by a 3-1 margin. Perhaps that wouldn't quite be as difficult to believe as the very fact of being comfortably in playoff position during February but, at the very least, mildly surprising and, if nothing else, among the high points of the season.

Yet if we know nothing else, it's pretty clear that the Clippers aren't about to let this series go easily: after taking a 115-89 drubbing at Staples Center a little more than two weeks ago, the Warriors obviously won't have an easy path to victory.

But how much can we really take from that game compared to the other two in the season series?

It was indeed a bad game - and particularly a bad first quarter, when they essentially dug a hole so big for themselves that it was almost inevitable that Tyler was going to see court time - but it certainly wasn't just a bad shooting performance that led to the loss. In the third quarter of that game - when they were outscored 36-23 - the Warriors only took 12 shots, didn't get a single offensive rebound, and committed seven turnovers.

The Clippers were obviously mad about the way the Warriors beat them 115-94 at Oracle a few days before, which wasn't the same type of blowout but had a statistical profile that was in some key ways the opposite of what happened in Los Angeles.

Ultimately, it might be fair to say that both of those two meetings in 2013 were somewhat anomalous. Without even displaying the statistics for the first game, suffice it to say that foul fest in which the Clippers took 52 free throws (to the Warriors' 39) and All-Star point guard Chris Paul going 19-for-20 from the line is not likely to be repeated either.

So ultimately, it's hard to take anything from those first three games either way. But here are three things that the Warriors might want to aim for today.

Although Griffin got himself to the free throw line quite a bit, the Warriors were successful in generally making him a jump shooter on January 2, which greatly aided in slowing down the Clippers. 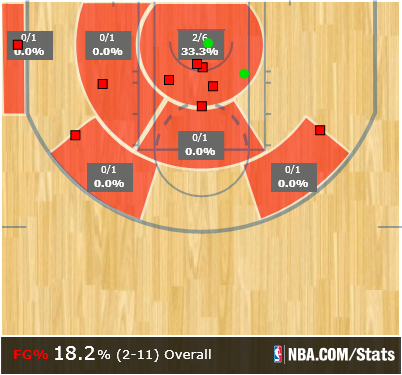 Yes, shooting efficiency has been a key to this series, but the most consistent factor in determining wins and losses in this series has been the rebounding battle: the winner of each of the first three games has won the offensive rebounding battle by a significant margin no matter what else happened.

So we might as well show the numbers from that first game at this point:

3. An efficient game from Klay Thompson

Klay Thompson has taken a lot of flak lately on GSoM for his inconsistent performances. There are probably two things worth watching for from him: whether he's taking good shots with his feet set and his focus defensively. The former has been thing hurting his efficiency; the latter has been better than most people give him credit for with a few exceptions that were magnified by the moment they occurred in.

Whether David Lee can go will also probably be a major determinant of this game: Lee played extremely well in that January 2 win and it's probably fair to say that just having the full rotation is key to beating the Clips.

But whether he's there or not, one thing we can say almost for sure is that this game will be very different than the the previous three: there's almost no way either team shoots as poorly as either of the two previous and as close to unlikely that Paul fails to get to the free throw line 20 times.

If nothing else, that'll make this one fun to watch.