The Golden State Warriors won a back-and-forth affair with the Toronto Raptors, pulling away from a scrappy Aaron Gray-led team late fourth quarter to win 114-102.

I think I covered everything there in six little words.

The Golden State Warriors (sans Brandon Rush) were completely healthy for a whole 32 minutes and four seconds. It was glorious.

And then it ended.

This morning, there were rumblings that Andrew Bogut would try to come back in time for tonight's game. Seeing that the team kept mum on the whole subject and it appeared he was at least a month away, it was more than a bit surprising to see him suit for the game. Of course, I didn't believe any kind of speculation until Bigfoot himself actually stepped foot on the court.

And step foot he did.

Disregard the turnover, it was all a part of the plan.

His timing was supposed to be a bit off, and it was, when he dropped a pass on offense. But other than that, he looked extremely good on both ends of the court. While he didn't move much, or at all on most pick-and-roll plays—choosing to pack it in the paint and making a seven-foot tall Aaron Gray shoot floaters (what?). I didn't see many instances where he got to yell at David Lee for missing weakside rotations (and he missed a lot) but that'll happen in time.

On offense, he moved up and down the court fluidly, setting screens and cutting in and out of the post smoothly. There were several times in which the Dubs decided to jack up threes instead of feeding the post but it's hard to correct the muscle memory of avoiding Biedrins and Ezeli in the post at all costs. 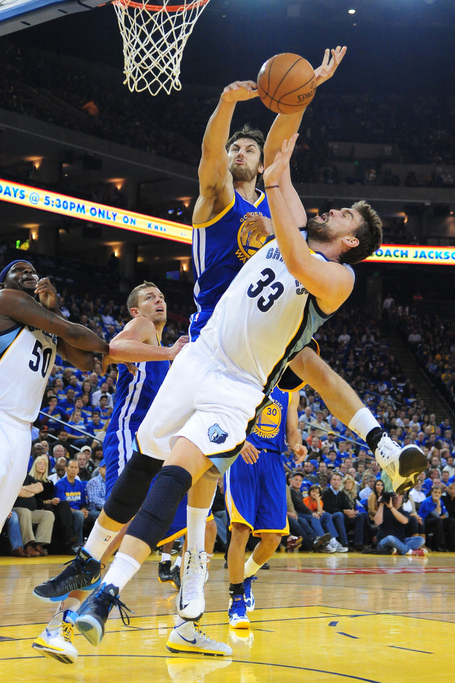 No Warrior Wonder image yet but there was no doubt he was the player of the game. Besides the double-blockfest he went on late first half, there were two offensive plays in which he showed just how high he can elevate this Warriors team. The first came on the first play of the game when he was able to establish position on the right block, take a dribble, spin to his right and flip a half-hook shot in with his left hand.

The second play came when Curry and Lee ran their patented pick-and-roll and instead of Lee fading straight out for a jump shot or rolling to the bucket, he got the ball near the baseline, and immediately dropped a dish down low to Bogut for the slam.

The Warriors can now send the ball down low for an easy bucket when the offense bogs down, and the Lee-Curry pick-and-roll gets even more spacing when defenders are forced to roll towards Bogut. They won't be able to just leave the center hanging around like they did so often to Biedrins and Ezeli.

1. Almost 500 words on a Warriors game in which Curry got hurt and nothing on him yet? Progress!

The Warriors beat writers stated that he feels this injury is like the one he sustained a couple weeks ago that cost him a couple games. The Dubs categorized this as a mild sprain. Seriously? In what world is a Steph Curry sprain a mild one? It did look like Curry wanted to go back in and he sat on the bench instead of heading straight to the locker room—which he did do once—and staying there. So no need for X-rays or MRIs.

It was a great call by Mark Jackson not sticking Curry back in the game no matter how badly he wanted it. Curry couldn't really lift off his ankles when he was cutting so he could have sustained further damage (professional ankle surgeon analysis right there). If I had to guess, I'd say he misses almost a week and comes back against the Phoenix Suns on Saturday. As for the ankle itself, all professional (or not) opinions on why this is recurring is encouraged in the comments.

2. Today was an Agressive Good Barnes Game. There's Not Agressive Bad Barnes Games which aren't good and there are AGBGs and that's really good.

He finished off his solid performance with a spectacular dunk on Aaron Gray. Just one problem: the way he fell and how it looked so similar to the way Brandon Rush had fallen after his dunk attempt went awry against Zach Randolph. It didn't help matters that Barnes clutched his knee immediately after, causing a heated discussion between Tim Roye and Jim Barnett about flagrant fouls. So sick of ACL injuries. With Rajon Rondo going down with one over the weekend, it's become scarier to watch players flying to the rim with reckless abandon.

Granted, this isn't the NFL, where nobody seems to care about concussions or head injuries, and ACL injuries are in a whole different realm when it comes to prevention, but it'd be nice if the Warriors could just stay away from the injury bug for a season. Or a game.

According to Marcus Thompson, Barnes will get his calf checked tomorrow. If he can play, he should pick up more minutes in the absence of Curry and Bogut.

Precautionary, I guess. It appears that the team was full aware that Bogut may be able to come back this week but didn't say so until the last possible moment. If Bogut was going to wait until he was fully healthy, like he stated before, then why was it a game-time decision for him to suit up? After Bogut told the media he had micro-fracture surgery and caused a huge ruckus amongst fans, it appears the Warriors management will not disclose any information that even comes close to news.

However, it remains to be seen whether Bogut is truly healthy. Is he not playing because of swelling, or just a day off because of fatigue and needed rest? Whatever it may be, I guess that it is better the team takes the most conservative route.

What a whirlwind of a game in late January. The already-successful season just got a whole lot more interesting with all the options on offense. Spread pick-and-roll? Straight post-up? Pinch-post plays with Bogut? The double screens with Jack in? Endless.

When Harrison Barnes is your worst option, things are going to be more than okay.