Vote for Curry and Lee. Because they deserve it, dammit.

David Lee and Stephen Curry are having great seasons. They're the clear leaders and best players of the Warriors, who despite unfavorable odds granted by injuries and historical precedence are 22-10, fifth best in the Western Conference. You even occasionally hear the Warriors' name on shows like PTI — even if only to talk about Blake Griffin's hilarious excuse for a three point attempt in a game in which his Clippers, suddenly America's Team, was getting steamrolled.

Share All sharing options for: Vote for Curry and Lee. Because they deserve it, dammit.

So naturally you expect Lee and Curry to be in the conversation when discussing the 2012-2013 NBA All Star game, or weekend, or festivities, or parties, or... something.

Nope. Not even close.

The third All Star ballot returns came in on Thursday. And it's not looking good for us.

Look, All Star voting is a severely uncontrollable, unfair, broken thing. While you'd hope that the best, most deserving players would receive the most votes every season, your hope would die a quick death when you face the reality that there are a ton of factors that go into All Star voting, and actual performance isn't high on the list.

But have you seen the guys that are getting more votes than our heroes? Jeremy Lin might beat Chris Paul out as a starter! Steve Nash, who's played all of seven games, has more than double Curry's votes. David Lee's received so few votes, his name doesn't even show up in the list — but guys like Omer Asik, Metta World Peace, and Chandler Freaking Parsons do!

As long as there's a popular vote, guys in big markets, guys whose names are nearing household-recognizability status, and guys who play for China-backed Houston will always rock the vote. Meanwhile, our guys play for Golden State, a place that doesn't even exist, a team that has been relevant once in the past decade. Let's face it, we're behind the eight ball here.

The GSoM crew all agreed that ballot box stuffing is a sucky thing. It's not a fair, honorable, or fun endeavor. But we also haven't been in this position before: the Warriors are a winning team, the guys are playing great basketball, and they deserve some recognition for it. They're getting a raw deal. And the only thing we can do is vote.

No, it's not possible for Steph or DLee to get enough votes to grab a starting spot. Our fanbase is deep, but damn — that's a tall task.

But we can get their names in the conversation. We can show the rest of the world that we're proud of our guys, and that we're internet-savvy enough to operate an online ballot. We'll also be showing Lee, Curry, and the rest of the team that we have their back. And if they're in the conversation at all, they have a much better chance of being selected by the coaches as All Star reserves.

Let's make a push and see where we can get. Vote early and vote often. Move the needle. Support our guys. And God Bless America.

Before I go, a special treat for you all: brand spanking new art by Tony.psd! If these puppies don't get your voting engines revved, I don't know what will. 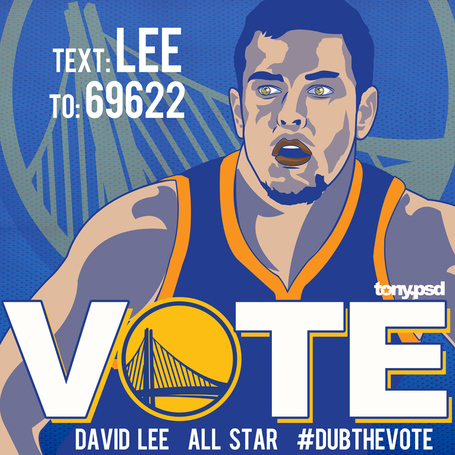 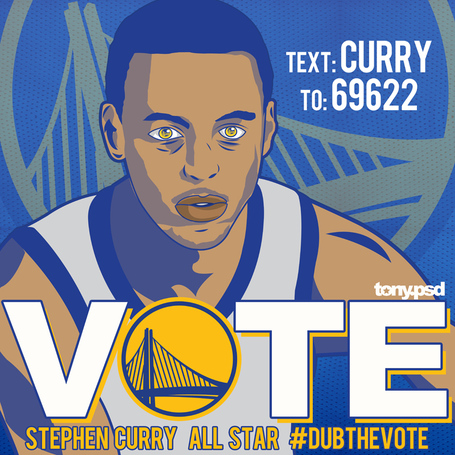