As we look forward to the Golden State Warriors' game against the 3-0 (!!!) Philadelphia 76ers tonight (4 p.m. Pacific), Michael Levin of SB Nation's Liberty Ballers gives us some insight into what is going on over there.

Share All sharing options for: Warriors vs. Sixers preview: Q&A with Liberty Ballers on Sam Hinkie's philosophy, Michael Carter-Williams, and an undefeated start

I could've sworn that the Philadelphia 76ers were supposed to be tanking this season.

In fact, SB Nation's Liberty Ballers might be more deliberately indifferent, if not entirely outright hostile, to winning than even Golden State of Mind was during the second half of the 2011-12 season when they needed to lose to keep the lottery pick that became Harrison Barnes.

But all of a sudden, here are the Sixers at 3-0 and messing with just about everybody's mind.

I actually wasn't planning on doing a Q&A for the Golden State Warriors' game against the Sixers tonight - we're planning on a different approach to these this season and I had only done the first couple because it was the first week of the season. But when I got home from GSoM Night and the Sixers were still somehow undefeated, I had to get in touch with Mike Levin from Liberty Ballers to get some insight on this madness.

I didn't really care to ask about the tanking (or rebuilding process?) itself - as alluded to above, they've got plenty of stuff up on their site about their feelings on that and Levin himself has an article that's worth a read in advance of tonight's game describing his thoughts on all this winning madness. But as I hadn't really bothered to watch the three wins in their entirety - vs Miami (!!), at Washington, and at Chicago (!!!) - I wanted to get a better feel for what on earth is going on there.

Levin was kind enough to turn around answers to my questions pretty quickly (on the day after the Philadelphia Eagles embarrassed the Oakland Raiders) and offered some great insight into what might be making this team tick and, in doing so, how the the Warriors might be able to end this undefeated streak.

1. GSoM: First, you all recently had a great opportunity to have a sit down interview with Sam Hinkie, which obviously had tons of great info (and the Joe Alexander tidbit was particularly humorous given that he ended up with the Santa Cruz Warriors). But for those who have short attention spans, what was the most enlightening piece of info or biggest takeaway for you in that piece? 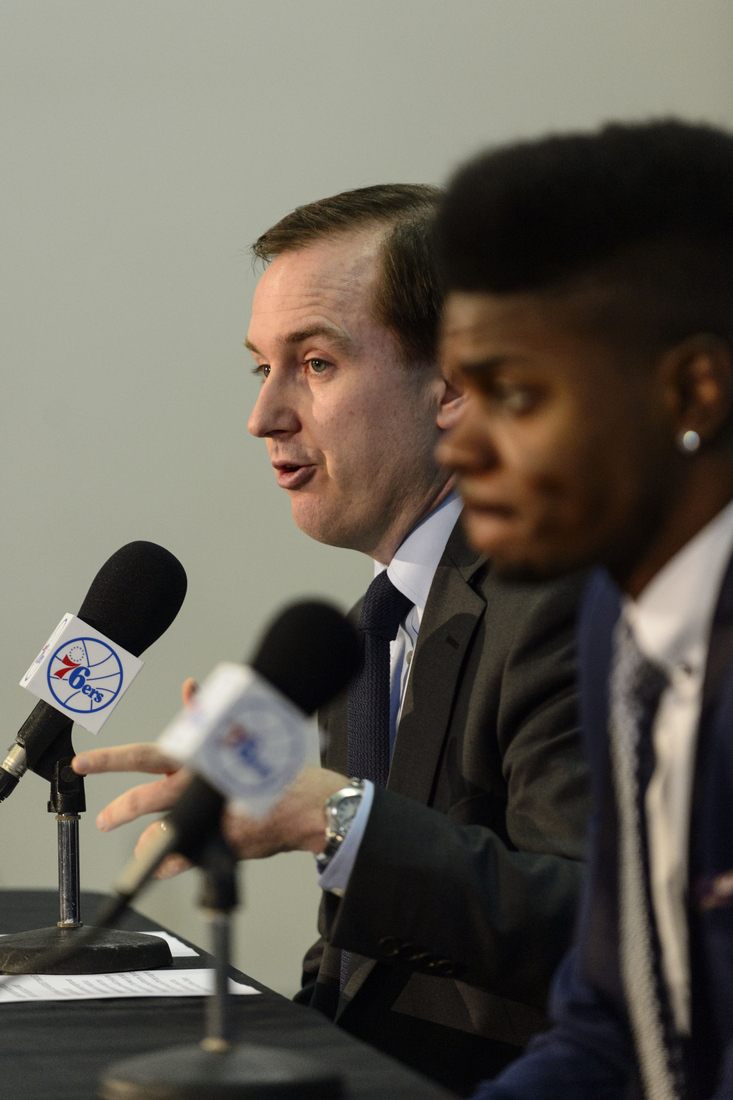 Sam Hinkie sat down with a couple of Liberty Ballers writers for nearly two hours last week and took whatever questions they saw fit to throw at him.

Michael Levin: A few of my guys were there -- I wasn't since I live in LA -- and they raved about him. I had him on my podcast and we've emailed some. He's just incredibly bright. There's not much of an ego, there's just a philosophy he believes in and wants to bring in people with strong viewpoints and a willingness to work.

In the piece itself, it's gotta be talking about hard work. For whatever reason, the analytical-minded basketball people don't often get associated with working your ass off, but Hinkie made it a point to emphasize it. He wants guys willing to put in the time and does the research to find out who those guys are: "We hope to ask reasonable questions to lots of people and try to strip out their bias and make an educated guess, but it's still just that. It's why we spend so much time with managers in college, trainers in college, and sports information directors."

He's just amazingly reasonable. That's the sense you get when you talk to him. Like, he makes it sound so easy and logical. I love him.

And yeah, the Joe Alexander line made me faint.

2. GSoM: Everybody is wondering if the Sixers are for real right now, and I'll just assume you aren't expecting any championship parades after this season or even a playoff berth. But from what you've seen in the first few games, what aspect of their early season success on the court is least likely to hold up over the course of 82 games?

ML: Aside from "everything," I think the jumpshooting (38% from beyond the arc) and pace control especially. People are knocking down tons of shots. That'll stop, and I think that's tied closely to the Sixers getting out in the open court and pushing the tempo. They're a very poor rebounding team, and they don't have any shot-blocking presence with Noel out. Defensively, they're kind of just swarming teams and gambling on steals because they know they can't keep with anyone playing them straight. It's Brett Brown seeing what this team struggles at and trying everything to disguise it.

3. GSoM: Michael Carter-Williams was a draft prospect I liked quite a bit despite his shooting struggles. But is there anything about his performance that has surprised you thus far aside from his shooting?

ML: Oh man, MCW is just so controlled. I'm a Cuse fan, so I had a lot of baggage on him coming in -- didn't love him until Hinkie gave his big vote of confidence -- but he's been incredible. You never really know how the defense will translate coming out of Boeheim's system, and it's been even better than advertised. The jumper has always had okay form, but it's really tightened up and looks like it won't be the liability some expected. We knew about the handles and the passing and the getting to the rim. But it's really how mature he looks out there. Changing pace, taking the right shots, using his length and height to his advantage... he looks like a complete stud. I'm thrilled.

4. GSoM: Speaking of my feelings about draft prospects, Evan Turner was one I wasn't at all high on and was ready to give up on as an impact pro. As someone who follows the team closer than I, what's up with him performing so well so far this season?

ML: Evan's bought in. That's what I can say. He's had to live under Doug Collins' roof for his career up until now, and that's done him exactly zero bit of good. Doug brought out all of his worst offensive tendencies and their clashing made for a mopey Evan.

Coach Nick of BballBreakdown weighs in on how the Sixers managed to beat the Bulls on Saturday night, including Hawes' game-clinching shot off a pass from Carter-Williams.

Now, Brett Brown and Sam Hinkie are putting him in a better position to succeed, and he's maximizing it. He'll still take Evan shots (stepback long twos.... woof), but the big knock on him was in his inability to play within an offense up until this point. That's more due to the fact that Doug didn't run an offense. Brown does. In the waning moments of Saturday's win over Chicago (!!!), it looked like ET was set up to go HEROBALL on us until he passed it up for MCW to run a play with Spencer -- the one that resulted in the behind-the-back pass for a Spencer jumper and Antoine Walker-esque backpeddle. Dirty.

We'll see if this continues, but for now, an Evan that plays with his teammates, finishes around the rim, and gets to the line (over 5 FTs per game) is a very different Evan from the guy we thought we knew. Either way, the Sixers didn't pick up his qualifying offer, so it looks like he'll be moved this season or walk after it. For now, he's only averaging 23-4-4 on 51% shooting.

5. GSoM: After years of pining, we finally got Andre Iguodala to the Warriors and it's hard not to love this guy! We also have former Sixer Marreese Speights and feelings among Warriors fans are, shall we say, mixed about him thus far. Any lingering stories/thoughts on that guy or his development that Warriors fans might find intriguing?

ML: You can really draw a line in the sand between Sixers fans who love Andre and those who don't. He's the best. You're lucky to have him. He'll be excellent at everything all season. It's the perfect situation. He takes crazy good care of himself. He dresses well. He has way too much air on his jumper. Really smart dude that was maligned here because of the role he was thrust into. The people who get it love him. Deservedly so.

Speights... he's just Mo Speezy. Not too bright. Not too much work ethic. Not too much passing. For 10 minutes a night, you could do worse.

For more on the Sixers' so-called "tanking" process, check out Liberty Ballers.