The Case for Draymond Green at Starting PF.

Time to end the hollow praise and make some real decisions.

Share All sharing options for: The Case for Draymond Green at Starting PF. 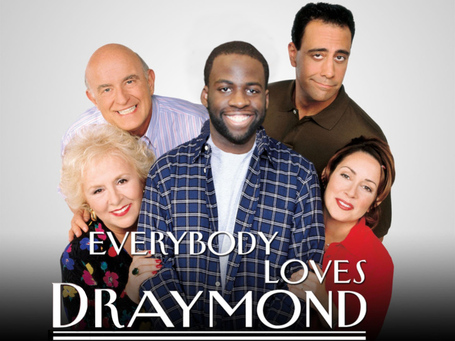 Sure, you love Draymond / I love Draymond / everybody loves Draymond, but he's a "Role Player." Instant Green Energy. The bargain-basement second-round $875,000 wonder. Doraemon Green, the do-it-all robot cat from Saginaw with the infectious grin and the pocket full o' magical gadgets. Lee, on the other hand, is the vet, the steady presence, the NBA All-Star (TM), the starter making $13.5M, sixteen times the long green Green makes.

Meh. Role player or not, it's becoming increasingly clear that Green is a more versatile, more complete player than Lee. Against Dallas last night he showed that he can lock down players like Monta Ellis (Westbrook, Kobe, Harden, e.g.) and players like Dirk Nowitzki (Durant, Gallinari, Chandler Parsons, Ryan Anderson, e.g.). Let that sink in just a bit. Lee is hopeless against both those archetypes. Meanwhile, on offense, Green continues to show that he can make smart plays within the flow of the game, find open shooters and cutters, hit open jumpers off the pick-and-pop, and (unlike Lee, with his one career three-pointer) spread the floor by draining open threes (39.1% in last year's playoffs, 36.0% this year to show it was no fluke).

That's three hugely important things that Green does on the court that Lee does not. (I'm counting guarding the Montas of the world and guarding the Dirks as two separate things). And then there's rebounding, one of Lee's presumed assets as a player. Ronaldinho <a href="http://www.goldenstateofmind.com/2013/12/10/5198694/inside-david-lees-rebounding">recently pointed to video evidence</a> that, for all his pretty-looking individual rebounding numbers, Lee is well below average when it comes to securing contested rebounds. There have been murmurings for several years now about guys like Lee and Troy Murphy picking up "empty rebounds' — i.e., rebounds that any warm body who stays home alone under the glass would have secured. Lee's history of not improving his team's overall rebounding numbers, together with the SportsVU evidence, start to lend serious credence to the idea.

Green, meanwhile, averaged 11.5 rebounds per 36 minutes his senior year at Michigan State (exactly what Lee averaged his senior year at Florida), and is averaging 8.5 rebounds per 36 as a pro <em>playing about half his minutes at small forward.</em> He's also a bit quicker and stronger than Lee, with a slightly longer wingspan (7'-1.25" to 7'-0"). I posit that, given the same position and equal opportunities, Green is at worst Lee's equal as a rebounder.

So what does that leave in Lee's column? Well, even given his early-season struggles with his normally reliable mid-range shot, it's clear Lee is a much smoother, more accomplished offensive player in the half-court — better at creating his own shot and providing instant offense when we need it. Lee is currently averaging 18.0 pts per 26 on .542 ts%; Green is at 8.9 pts on .531. But we have a lethal offensive force in the starting unit already: by far the best shooting & scoring backcourt in the NBA (Klay 20.5 ppg on .599 ts, Curry 24.0 on .595) with Iguodala, the best passing/slashing NBA wing not named LeBron, to help get them good looks. Moreover, is not "instant offense from a guy who can create his own shot" — in an otherwise one-dimensional player — what teams typically look for in a bench guy? San Antonio starts Kawhi Leonard (and before him Bruce Bowen) and brings Manu/Diaw off the bench. Miami starts Battier and brings Allen/Beasley off the bench. OKC starts Sefolosha and brings Lamb/Jackson off the bench. Chicago (when they were good) started Deng and brought Korver off the bench. Etc. The bench is where you stash guys who are good at a couple of specific things. In your starters, you typically want your most multi-dimensional, most complete players — the ones that create favorable mismatches and avoid unfavorable ones, especially defensively.

Sorry, but that's Draymond Green, not David Lee. I love a ton of things about Lee (passing, efficient scoring, high hoops IQ, e.g.) but when you're a svelte 6'-8", can't defend the perimeter, can't defend the rim, and can't hit threes, I worry that you're a dinosaur in today's LeBron/Durant-centric NBA — even if a hard-working, efficient, productive, likable dinosaur.

Still not persuaded? Well, how 'bout some precedent. Yesterday, Ethan Sherwood Strauss <a href="http://espn.go.com/blog/truehoop/post/_/id/64497/the-trouble-with-david-lee">reminded those of us who may have forgotten</a> what happened at the end of last year. We were a .500 Pythagorean team that had started the season strong, fallen into a protracted second-half malaise, and were stumbling into the playoffs as a #6 seed. We lost Game 1 ... and David Lee to a torn hip flexor. The mostly enjoyable season was presumed over. And then, lo and behold, with Lee sitting and Green and Barnes at stretch PF, the team was born again hard. With Curry and Klay launching, Bogut manning the inside, and Barnes and Green stretching seemingly everywhere on O and D, we were an unstoppable dynamo. Whupped the 57-25 Nuggets 4 of the next 5 games. Put the fear of God into the near-NBA champion Spurs. (Had we not blown a 14-pt lead with 4 minutes left in Game 1, and/or had Curry and Bogut not started to fall apart physically, who knows it might have turned out). Gregg Popovich raved about the versatile twin rookies Barnes and Green, and how much trouble he was having matching up with them.

Flash forward to now. The team, as in the second half of last season, is treading water. The starting unit, with Lee and Bogut clogging the middle, has not been not starting off games well, particularly offensively. And Iguodala is about to return from his hamstring injury, which will immediately force some real decisions about playing time. It's nice to wax all warm-and-fuzzy about the greatness of Green and his gritty role-playery-ness, but he can't do any of the great things he does from the bench. Playing time is zero sum; and at a certain point we're going to have to put our minutes where our mouths are. If Lee (34 mpg, almost exclusively at PF), Iguodala (37), Klay (38) and Barnes (34) continue to play at their current rates — even with Iguodala getting 5 mpg at backup PG — that leaves only about 5-10 meaningful minutes a game for Green. Sorry, but that would be a travesty, and a good way to lose more games than we should.

Do the right thing, Lacob/Myers/Jackson. Cut Lee to 15-20 minutes at backup PF and another 10 at backup C, depending on favorability of matchup. Cut Barnes to ±30 mpg at the wing and occasional stretch 4. Free Draymond. Start Draymond. Thanks in advance.