What a beautiful, beautiful man. Y'know, basketball-wise. And it's not what's on the outside, it's what's on the inside. Or something — what I'm trying to say is, while his box score line is rather unattractive (17 minutes, 1-4 shooting, no boards/steals/blocks, two assists, three fouls), his apparent effect on the team's play warmed the heart. Everything just clicked so much better than we've seen of late, on both sides of the court. Better passing. Better spacing. Much more transition offense. Much less guard penetration on defense.

And this was all happening whether Andre was on the court or off. Do his teammates also have men-crushes on him and just wanted to impress? Only they know the answer to this pressing question, but regardless, you just saw better activity from a team that hasn't looked whole for awhile, particularly defensively.

Comcast Sportsnet Bay Area told the story pretty well, so I'll just go ahead and crib from them. They dropped this telling graphic before the game: 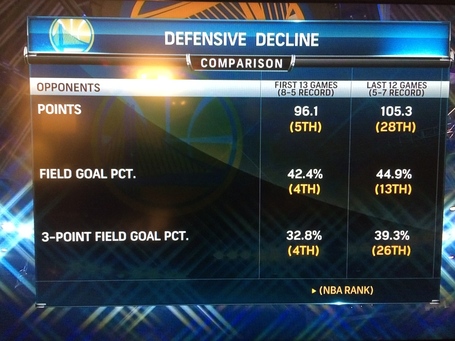 And followed up with this one after the game: 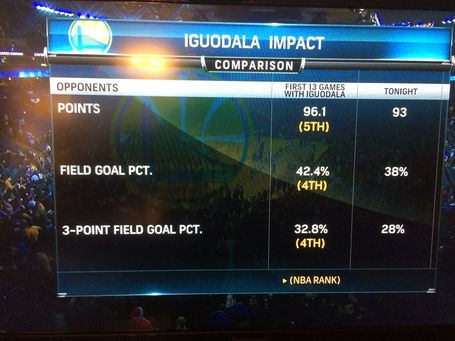 Coincidence? Shmoincidence! But really, probably not a coincidence: Iguodala is one of the best players in the league on defense, and even in limited minutes it showed. That said, their success with him off the court tonight was perhaps not so shocking. GSOM game thread superstar Klaymation with the good knowledge:

For those who say "It's not just Andre"

Post-injury: Warriors without Andre are -1 per 100 possessions. (Almost breakeven)

Pre-injury: Warriors without Andre were -16.4 per 100 possessions (Worst in the NBA by a mile)

In other words, if you think we are bad now, we’ve actually had dramatic success learning to compensate for his absence.

So there's your bright side of the .42 winning percentage in the last 12: maybe some other guys on the bench, who were just collectively grotesque at the start of the season, have gained valuable experience on the court, learning not to suck. (Btw: they really sucked in the 4th tonight.)

Maybe I've gone overboard with the Iguodala love tonight. Luckily I'm not the only one:

Also the super early returns on "Does Iguodala back fix the Warriors?" is "YES HELL YES ALL OF THE YES THEY ARE BACK TO MURDER INCORPORATED"

And now for our segment where we disparage that awful, awful man, David Lee. JUST KIDDING David Lee was awesome tonight. The lack of interior defense and potential for his shot being blocked by the Anthony Davis-less Pelicans activated Lee's salivary glands, and his first-half feast was glorious. Momentary man-crush? Sure, let's throw one David's way! This was a double-double that even the most ardent Lee naysayers can't say nay to — 21 points on 10-15 shooting, 17 rebounds with six of them offensive, even playing some good defense at times on Ryan Anderson and Jason Smith.

Marreese Speights: do you get a man-crush? I don't usually go for people with the crazy-eyes, but you're deserving of a bit of rare love. Speights had some really good minutes off the bench in the first half, showing plenty of hustle, doing more than just shooting long mid-range jumpers.

Had to love Andrew Bogut tonight as well, working the boards, running the floor and getting involved in early offense after guarding perimeter Pelican bigs. Pretty sure he got away with shoving some guys in the back as well, so, y'know, just another day at the office for Bogues.

How about Stephen Curry: anybody crushing on him? Well yeah, of course you are, and don't you try to deny it. I almost feel bad for him that Iguodala's return makes us ho-hum at his monster game (28 points on 11-19 shooting, 4-4 FTs, 12 assists, four boards, three steals, just three turnovers tonight). Curry has been a bit of a turnover magnet for a good long while now, so it's nice to see that A/TO ratio shine. And Andre's presence has to have contributed to that bit of success: while he didn't run a traditional point much at all, just his ability to penetrate without the ball and create situations where the ball moves around successfully takes a ton of pressure off of Steph to make plays on his own. Sure, Steph went ahead and made a bunch of those plays tonight anyway, and he looked great driving to the cup and making some nice finishes, showing all the tools of a superstar point guard slash best shooter ever.

Not much more to say here; I know that Curry had the better game, but I just gotta give Iguodala the honors tonight. There may have been a couple other performances not noted in this recap, but I'll let Evanz write his own Draymond Green man-crush post. I will however leave you with one final thought: