Visualization of Warriors Offense According to Synergy

Share All sharing options for: Visualization of Warriors Offense According to Synergy

It's been quite a while since I did one of these "statistical" posts. By now you probably already know that Synergy is a service that charts video and classifies scoring plays into one of several different types, including spot-up, isolation, transition, pick and roll, screen, post-up, cut, hand-off, offensive rebound, or "other". Synergy isn't perfect (it's not 100% error-free) and it isn't as cool these days, perhaps, as SportsVU. But it does give us some orthogonal data from the typical box score or play-by-play data that most of us have access to on a regular basis.

While Synergy itself is easily understandable, the treemap visualization below likely needs a bit of explanation to comprehend. It's actually a very clever and compact way to see a ton of data all in one place. The basic idea is that it shows a hierarchy of information that flows down from the team to the player. The (relative) size of a box represents the number of scoring opportunities. At the lowest hierarchical level we have a single box representing a single type of play for one player. When you add up all the boxes representing all the plays for a single player it adds up to the size of the player's box. Curry has taken the most shots on the team, so he is the player with the largest total area of boxes. So just to be clear, the smaller the box the fewer number of plays it represents. The other crucial piece of information a treemap represents is the efficiency of each shot type, which is given by the color. Here, I've mapped inefficient plays to blue and very efficient plays to red. A short discussion of some takeaways from the data follows the treemap: 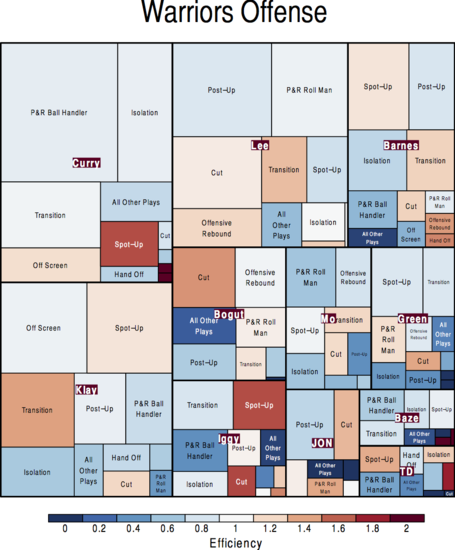 That's it for now. Let's re-visit this sometime in the second half of the season and see if anything significantly changes. Merry Christmas and Happy New Year everyone!