Share All sharing options for: What's Wrong With The 2013-14 Golden State Warriors?

A crying infant, perhaps a kid in their "terrible twos"? No. Not quite the one.

A colt having trouble standing up? Again, a little too dramatic and not representative of present status.

A first-generation Toyota Prius? Too much explaining to do. And that model is downright ugly!

So I figured the best way to tell you what's "wrong" with the Golden State Warriors is to tell it like it is. From the basketball experiences, the memories of the game that I have.

You see, I've been there. Done that. Constructed teams. Coached traveling tournament teams of amateur adults (the "underground" Asian-American community, if you will).

Had my fair share of politics. Dealt with primadonna star players. Pounded that rock, so to speak. Been blamed for subbing my players incorrectly. Enjoyed credit for winning championships when I didn't deserve it.

Fast forward my immense rec league and tournament career about a millenia, and the year is 2007. Made a conscious decision not to play anymore and just focus on coaching, now that I had management duties being the Commissioner of Dream League (note to all rec league players out there: don't try to play and coach at the same time).

This instance, I had the upper hand. I had access to a pool of about 80 Bay Area teams. I'd enter my "Dream League All-Stars" in these Asian tournaments.

As much as I remember the championships we won (I'd like to think I captured ten of them during my several-year run, I'm not sure?), I'll never forget the trip to what I refer to as the "Humble Pie Classic".

It was the Mofufus Tournament in Los Angeles, run by some of the most tenured Asian-American basketball organizations around: alums of the fabled Alpine Striders.

My team was the second iteration of All-Stars, equivalent to USA's Olympic Dream Team II, if you will. The guys from my original Dream Team bolted to join forces with their friends -- one reason why I had no problem with LeBron James's departure for the Miami Heat (Cleveland was no more entitled to LeBron than I was to certain players that played in my league).

This team, though, featured far more weapons and slightly older players. Two of them were from the same championship Dream League team from my league play. In effect, I'd reloaded.

Mofufus would be the first of many trophies we expected to collect along the way. A Halloween tournament, it would prepare us for our local San Francisco tournaments during Thanksgiving and December, then the Filipino ones in the winter, culminating with the crown jewels the Tiger Tournament in LA in May and the Las Vegas Invitational to close things off in September.

I even had our Warriors-Lakers crossover jerseys ready to go, with everyone's last name on the back. We would capture Los Angeles by storm.

When we got there, our first opponent was the worst team, on paper, in the six-team field. A bunch of no-names wearing unmatching reversible jerseys, some of which had numbers falling off of them.

As we warmed up, looking at the pedestrian layup line of our opponents, I thought to myself, "Good, we finally got a first-round draw in our favor," which would help our extremely talented squad build chemistry as the tournament progressed.

But there was one kid on that ragged team, Drew Bryant, who would play like the brother of Kobe that day. Well, at least from outside.

He couldn't miss. That ugly release seemingly from the back of the head, turned pretty. Turnaround three-pointer? Swish. His teammates fed off of that. 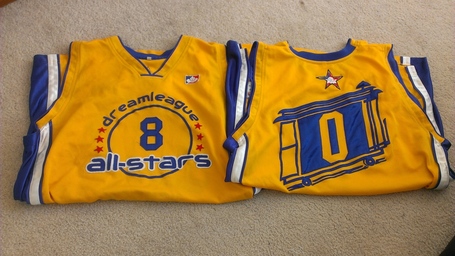 [Bringing these all-time awesome threads can work against you!]

Incidentally, Bryant is now one of the key players on a stalwart Asian championship team called Menehune. They go by other names too, depending on the sponsor and tournament, but suffice it to say, they now have a strong track record.

Anyhow, we were throwing the ball away, messing up fast break opportunities, zigging when our teammated zagged, stuck in quicksand on defense. It was like we touched a basketball for the first time.

I mean, it's not like we didn't put two and two together and figure out how good Drew was after an embarrassing first half. But he just kept making shots even when our close-outs were on-point. Their other guys, none of whom would've made the Dream League All-Stars roster cuts, played better and better as a team.

What happened to all the scrimmages I had setup prior to this? Even when we had the iso matchup we wanted down low, my guy couldn't score. Just rimmed out again and again. And he led Dream League in scoring back home!

I always took pride in my ability to stay calm as a coach. It was a far cry from my playing days when, on rare occasion, I would argue with refs a bad call, snap, and pickup a tech, but I knew that yelling at players wasn't necessarily going to make them play better.

As it were, benching them or switching out the starting lineup would probably result in more damage than good. We only went about seven or eight deep anyways, and the seventh and eighth guys were, on purpose, young up-and-comers who were supposed to provide spark off the bench. Long-term, they'd eventually replace the starters in the next iteration of the team.

Plus, being Commish had a maturing effect on me.

Yet, to this day, the Mofufus tournament was the only time I'd ever thrown my coach's clipboard. It happened after our star shooter inexplicably couldn't convert a 2-on-1 fastbreak.

The final score was not close.

After the debacle, the tournament director shook his head and said, "I swear man, that's the one out of ten games they're gonna beat you." Even he was in disbelief. Bryant's team would come back down to Earth their next game and act like the low seed they were pegged to be.

Mofufus circa 2007 remains the only tournament where a team that I had constructed and coached had been double-E'd (lost the first two games, sent packing).

I'll tell you what I did, though. I never entered us in a tournament as "Dream League All-Stars" again. After Mofufus, it was just "DreamLeague.org". Whether it had anything to do with that, Bryant never went "Kobe" on us again, after all these years.

We didn't fall off a cliff after Mofufus. Of course, I had my requisite sleepless night where I feared that this team I had so diligently assembled was all for naught. But I'm not a quitter and, obviously with my experience, knew better.

We got our act together, entered the next tournament with even more resolve, won a few and lost a few. But the thing is, we won some championships. Not a lot. But a few.

It's kinda funny. A lot of people remember the championships we won but not the ones we lost. They remember the elevator play we ran before the world started calling it "elevators" (we called it "single-double", in reference to the screens), to beat the Stockton Ballers powerhouse team in the semifinals in Vegas. They might even be oblivious to all of our struggles.  There weren't that many chips, to be honest.

The write-up by the tournament director on our most famous 2008 New York Gotham Games chip, led by none other than Josh Urbiztondo -- yep, he's the (former) primadonna I was referring to -- was described as "They came, they saw, they conquered, just as they planned."

Gee, thanks! If they only knew, haha.

I don't even recall what so-called "adjustments" I made in the game, but I sure got credit for it. I just remember our guys battled back and turned some sub-par play into some epic defensive stops against perhaps the most formidable front line the East Coast Asian-American community has ever seen.

Did we play a perfect game? Hell, no. And yet it is written that we were this awesome team.

Take note: We were awesome when we played well, which wasn't for every minute of every game. And we had the stars to carry us when needed.

So what's wrong with the Warriors?

The Warriors are simply learning how to respond to the response.

I'm not going to sit here and blame them for being what they are, which is a young team. If the San Antonio Spurs are in Year Ten, the Warriors are in Year One or possibly Two.

The franchise is building its foundation right now, and it's a good one that might be going over the heads of many Warriors fans:

(The above was made in reference to Dwyane Wade saying in an ESPN interview that he had to let go of his ego, such as wanting to win the scoring title, for the Heat to succeed.)

Of course, I'm frustrated to see the Dubs making bonehead turnovers, missing shots they ought to make, basically not firing on all cylinders.

But I'm enjoying the process. I really am.

That is, unless someone hits the panic button.

I'm not going to pout about the fact that they have that proverbial "X" on their backs because of their great off-season moves and other teams knowing it, perhaps feeling jealous about it.

I'm not going to lament that the six most important players on the team can't play well at the same time, for every minute of every game. That's such a myopic view of the game.

And I'm certainly not going to suggest that they fire the coach.

NOTE: This is probably my last Warriors-related post for GoldenStateOfMind. It's been a great ride, especially the memorable articles I wrote here and that I linked in this piece. As some of you already know, I've started my own "DubNation" blog (it's not called that, though!) and you probably know where to find me, if you're interested.

I have nothing bad to say about my GSOM compadres. Whether it's a highly opinionated post, graphic art, or a collection of links, it's still our time (I'd guess, what, two hours per piece minimum?), blood, sweat, and tears going into this. Co-founders Shailo and Justin remain two of the sweetest human beings alive. Nate, who's taken over day-to-day duties, is right up there, too, although I'd shared more journeys with "Atma Brother One" and "Fantasy Junkie". I, like my Dream League All-Star players, have just decided to move on and avoid dissecting something not worth dissecting.

I want to wish my GSOM readers a Merry Christmas and a thank you for reading. I thought posting this on Xmas would be helpful and bring a more measured take to what's happening with our beloved team, and I hope it makes up for some of the NBA bloggers out there who took some shots at GSOM. But hey, GSOM kind of deserved it, too.

"Fire Mark Jackson" wasn't so much a suggestion as it was a wave of emotion. While GSOM might not always get it right logically speaking, it's the one blog that helped Warriors fans survive the Cohan era, which as well all know, defied logic. GSOM has its fingers on the pulse of fans' feelings like no other. Wherever I'm writing, that will probably always be true.

Hang in there. This team is special. More so than any other team I've seen. And that's a lot of teams! Believe it.