The Golden State Warriors, partnering closely with adidas, released a new alternate uniform on Tuesday. What follows is over 1,000 words of critique that could only come from someone with an unhealthy interest in these sorts of things.

I think it's fair to assume that most of us hoop in t-shirts. Unless we have actual jerseys from playing on our high school teams or some other organized ball, we're just far more likely to wear a t-shirt, because hey — you're not gonna wear your $100+ piece of apparel on the court. The shoes are enough. So it's not like sleeves on the court look terribly out of place.

But let's not pretend there's any sort of advantage or logical conclusion that sleeves are functionally better than tanks for basketball. And I do think it's worth pointing out the cynical reasons why a team, and adidas, would do this.

1) A sleeved jersey is a more likely piece of apparel for one to wear in social situations other than on the court or at the game. Joe Sixpack can potentially wear a sleeved jersey at Jamba Juice without flapping his armpits to and fro. It makes a lot of sense for adidas and the NBA to try popularizing a sleeved jersey: they can basically sell $100+ t-shirts.

2) Like any alternate jersey, it's all about doing something fresh and new to bolster merchandise sales. And that's fine, no problem with that.

3) This is super cynical and I don't necessarily believe it, but a part of me wonders whether the NBA is motivated to cover up their well-inked employees a bit more. The sleeved look is a bit more "wholesome", and may appeal to the, er, more conservative folks out there.

This is all fine. It's a worthwhile experiment, I like the idea that the Warriors are pushing these boundaries first, and I don't think they look bad at all. The rest of this uniform is where things don't hold together so well.

The logo and wordmark

One big problem with the current standard jersey is that the "Golden State Warriors" text is diminutive, and ultimately useless: if you can't read the team name on a player's jersey from more than 20 feet away, why even have it on there? It's bad for more reasons than the size, but I think that's been hashed over before.

So I like that they tried something different here: they emphasized the team name and made the player number larger, while also keeping the bridge logo present. The look harkens back to Run TMC, with "Warriors" set at a slight angle but otherwise unembellished (other than the cap height alignment). It's a much bolder treatment of the name than we have now, and that's definitely a plus. They've also managed to modernize the typeface Copperplate Gothic about as much as it can be.

But there's a reason they didn't go with the bolder logotype treatment from the start: it just doesn't fit. There's not enough room on a jersey for the wordmark and the circular logo. And so they were forced to overlap them, changing the logo to white to relegate it to the background.

Does this work? I think it ends up looking busy, and almost faux-futuristic. Ask yourself this: if you just completely removed the white bridge logo from this same design, would it look better or worse? To me, without question, it would look better with it. 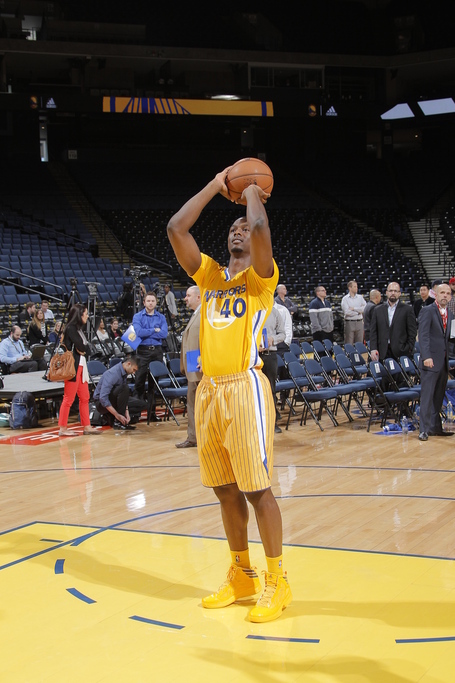 Ok, I've never liked pinstripes on basketball unis. I don't understand them. They work in baseball because of the nature of the game and of the uniform; they're wearing athleticized button-down shirts, belts, and pants. Teams like the Yankees have been wearing pinstripes forever. But in basketball? On athletic shorts and tank tops (well, until now)? They feel out of place.

But... why are they just on the shorts? What is the reasoning there? Rick Welts was reported to have claimed that the pinstripes represent the cables on the Bay Bridge... but as myk pointed out in today's fanshot (shoutout to iHypeTV who had it first), the bridge cables are splayed in a non-parallel manner. I think that's pretty flimsy. And, y'know, those are definitely pinstripes. But even if you buy the connection, why again are they only on the shorts?

And of course, the colors

Love the bold yellow on the shirt. No problem with that flashiness. But in no uncertain terms, the mismatching shorts are unconscionable. Combined with the pinstripes, it really looks like these shorts below to a different uniform, like they designed two different kits and then packed the wrong shorts before shipping them to Oracle for the unveiling.

Remember those short-lived Wizards alternates, with the gold jersey and black shorts? Those were absurd. But they were almost absurd with a purpose. They were avant garde, entirely gaudy, and yes, ugly as sin. I kinda liked them.

But this new Warriors alternate isn't absurd enough. If they added the pinstripes to try and differentiate the shorts even more, then they didn't take it far enough. The color is close enough to look like it should match, and off by enough that it looks like someone made a terrible mistake.

I suspect it has something to do with the fabric. Perhaps by using standard material for the shorts, they weren't able to accomplish the exact same color.

But in the end, a mistake is a mistake. If they couldn't match the colors, they should have scrapped the idea. They should have gone all white. They might have even tried going just white shorts, just to take it to that next level of absurdity, where you at least can say, "well, they tried something crazy and unique, you gotta give 'em that".

You do have to give the Warriors and adidas credit for trying something significantly new and different with the sleeves. The idea itself might have legs, both as a more marketable piece of merchandise, and as a decent on-court look for NBA players. I love that the Warriors were willing to be the guinea pig, and are on the national radar enough for adidas to partner with them.

I hope I'm wrong, and that this alternate jersey will look great on the court. Maybe once the shirt is sweat through, the color suddenly matches the shorts, or has hidden pinstripe watermarks that show themselves midway through the first quarter to complete the ensemble. At the very least (ok, maybe this is most important of all — MAYBE), I hope the players feel comfortable and perform better on the court. But aesthetically, the execution just didn't measure up to the promise. Where the sleeves should be the focus, the overall look distracts enough from that innovation, and you can't help but think: "Whoops".