We've had our debate about the Golden State Warriors' new uniforms, with ivanbe offering his critique and Andy trying to persuade us that they're innovative.

It's probably fair to say that New Orleans Hornets center Robin Lopez sides with ivanbe, if sharing an article on Facebook represents agreement. 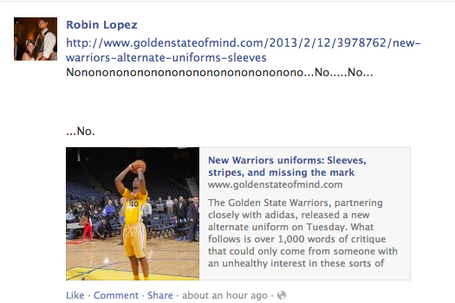 In other uniform news, Marcus Thompson II reported this morning that fashion aficionado Tim Gunn gives the look a thumbs up. And although Gunn is the "expert" in this fashion arena, I'll side with the seven foot guy who reads our site on this matter.