Utah Jazz 115, Golden State Warriors 101: Not what we were hoping for

The Golden State Warriors fell to the Utah Jazz last night, losing their sixth straight game and fifth straight on the road. This is not what we were hoping for after the All-Star break.

Share All sharing options for: Utah Jazz 115, Golden State Warriors 101: Not what we were hoping for

Every time someone has asked whether I was surprised about the Golden State Warriors' performance this year, I have not only answered in the affirmative but also felt deep down that this team was overachieving.

Winning without center Andrew Bogut. Winning the series with the Lob City Clippers 3-1. Taking their talents to South Beach and beating the Miami Heat. All sorts of milestones that hadn't been reached since Chris Webber's rookie year.

These were things weren't supposed to happen and, since we don't normally get to have nice things, I didn't take any of it for granted - I appreciated every moment and was just happy to be watching crisp, winning basketball. In fact, I definitely recall boldly proclaiming to at least one person that, "No matter what happens for the rest of the season, this year has to be considered an overwhelming success."

That, of course, was under the naive assumption that they wouldn't just collapse as they have over the last the last six games, including last night's 115-101 loss to the Utah Jazz in Salt Lake City.

Defensively, this was reminiscent of the days when the Warriors were endlessly searching for big men who could compete on the interior - to their credit, they were ok on the boards even if they lost the battle of second chance points but they just didn't seem to have what it took to stop any of the Jazz posts. Derrick Favors, Al Jefferson, and Paul Milsap all seemed to have their way with the Warriors inside. Then, as the folks at SLC Dunk reveled in, we couldn't do anything to stop Utah's shooters around the arc and they shot 47.6% from three.

Offensively, it seemed like a banner night through three quarters when the Warriors shot 52.4% and, as you can see in the chart below, 66.7% in the second quarter. They were hot by any estimation. But how they got those points was still something that stood out to me. 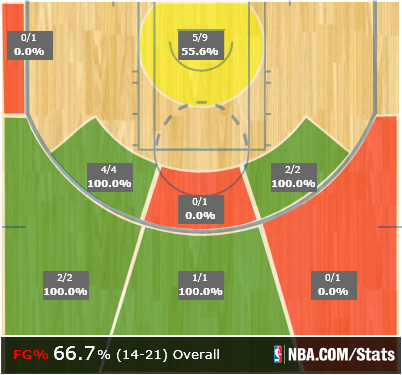 Second quarter shot chart for the Golden State Warriors against the Utah Jazz on 2/19/13.

You'll note that's a lot of jumpers and a lot of long two point jumpers. The Warriors had six assists in that quarter, all belonging to Jarrett Jack five of which set up spot up jumpers from (mostly) Stephen Curry, David Lee, or Klay Thompson relatively early in the offense (the first pass). The rest was basically individuals making tough shots (and Steph being Steph).

That sort of shot chart is great when the shots are falling. The problem is what happens when they don't fall or don't come quite as easily. And the most striking thing about last night's game was that when they weren't hitting those long jumpers, there was just a lot of one-on-one play.

To be clear, there's nothing wrong with a player putting their head down and driving after rotating the ball a few times to loosen up the defense - that's what most of us would probably like to see more of from Thompson or Harrison Barnes and it makes sense. The problem is when players start to force that one on one play instead of continuing to move the ball. In the second and third quarter - despite shooting quite well - this just looked like a team searching for answers on offense and each individual trying to take matters into their own hands instead of relying on the team play that made them a contender to begin with.

Of course, none of that changes the fact that I'm in awe of Stephen Curry's shooting. With Jack playing the role of distributor quite admirably, Curry's 29 points on 12-for-22 shooting was hardly the problem. He continues to be a deadly threat off the ball and an under-appreciated ball handler with it in his hands. He just can't do it all and shouldn't get to a point where he's trying to.

For whatever reason, the teaminess that some of us raved over early in the season wasn't quite there last night. And while panic - either in terms of giving up on the season or rushing to trade players - might not be warranted, it's hard not to fall into the trap of a self-pitying Warriors fan and think here we go again.