That about sums it up, Richard.

The Golden State Warriors were riding a four-game winning streak, fueled by the tangible presence of the fabled Andrew Bogut. The Houston Rockets, meanwhile, were amidst a mini renaissance, wining five of seven after a seven-game losing streak, averaging 111 points per game over that stretch.

This was set up to be an awesome game! Just awesome!!

And then... this happened: 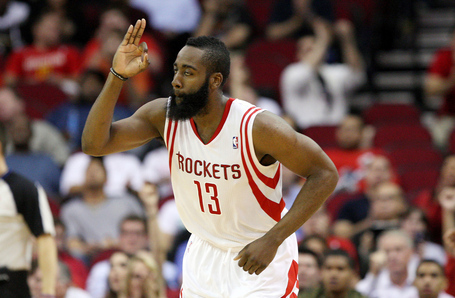 First quarter: The Rockets went 7-10 from the three point line. Score: 38-37. Ok! Not bad, hanging in there, shooting 58%, tallying nine assists in the quarter. The Rockets aren't going to keep hitting at that rate from the arc.

Fourth quarter: Who the hell knows.

That first quarter was actually one hell of a quarter of basketball. The Warriors were moving the ball, finding easy buckets down low, led by the stellar bench play of Jarrett Jack and Carl Landry. Each of them had eight points in the quarter, in minutes 3:30 and 5:10, respectively. That second unit killed the Rockets' second unit to almost even the score, after an early 10-point deficit.

Unfortunately, Houston's bench dropped a quick seven on the boys in blue early in the second. And the Rockets starters didn't all head to Hooters after the first 12 minutes — they reentered the game mid-quarter and recommenced the onslaught. This was just back-breaking fire-and-brimstone stuff, guys: drive and kick, drive and kick, drive and dish, pull up three, get to the line. Their offense flowed like whiskey from the bottle in my hand. Open shooter after open shooter took their turns launching mortar bombs from afar, and it just never let up. And in the rare event that a shot was missed, the Rockets cleaned up on the boards, taking the quarter 11-6.

In a way, it looked like they played into Mark Jackson's hand: in the half court, the Warriors' defense was collapsing hard on drives from the top, protecting the paint from easy buckets by James Harden and Jeremy Lin. Harden only had two makes in the first — both threes, of course. The Rockets missed a lot more shots close-in and mid-range than they made, as the defense clamped down on the easy stuff. They sacrificed three-ball defense.

And hey, this isn't exactly new. The Warriors are 28th in three point attempts allowed. But they're third in opponents' 3FG%, allowing just 33% from the arc on the season. So this has worked for Jackson and crew, and it didn't look like they were going to stray from what got them to 30 wins.

But the ball. Just. Kept. Going. In. Here are some figures. Lin: 5-8. Harden: 4-5. Parsons: 4-8. Morris: 3-6. Patrick Patterson!: 1-2. Toney Douglas and James Anderson? 2-4 each. Look, these guys lead the NBA in three-point attempts, so the quantity shouldn't have been a surprise. Clearly their game plan is to push the tempo, spread the floor, use the excellent slashing abilities of Harden and Lin to collapse the defense, and kick out to whoever's standing there waiting to fire. So maybe Jackson played into McHale's hand. But damn: I don't know if any team can win against that fire.

So, do you just tip your cap, and hope the basketball gods shut off the juice? Or do you change what you're doing defensively? Eh. Houston did a great job of playing off their long-range success. If a Warrior defender closed out hard, pump fakes were sending them into the stands, and Rocket shooters would probe, make the defense react, move the ball back out, then back in, then out again, until some guy was just wide open for a shot somewhere.

And while the Warriors' own offense wasn't slouching, eventually they ran out of patience and just gave in to the inevitable. In the third quarter, guys started taking early gotta-get-back-in-this shots that just ended up fueling the fast break. The ball stopped moving around like it was early on. They just looked exhausted from chasing shooters all over the court on the other end. They looked defeated. We haven't seen that too often with this Warriors team.

Then again, we also haven't seen a team go 18-27 from the three point line through three quarters. And we haven't often seen our own team go 3-10 — for the entire game — from that same line. Stephen Curry and Klay Thompson were run off the line. The Warriors worked the ball inside and weren't having a problem scoring the ball, but when you score two points for every three from your opponent, the scale tips with great haste and violence.

In the end, maybe you do just tip your cap, hike up your big boy pants, and take it out on the next team you come across. That'd be the Oklahoma City Thunder, tomorrow night. Oy.

Because I guess we have to give one to somebody, Carl Landry can take tonight's honors. His meaningful minutes were good, Houston really couldn't defend him, and he was one of the few pluses on the night. But, Carl, I wouldn't get too excited about this one. All of us fans are going to be trying hard to forget this game, and you probably should too.