What in the offense's name is wrong with the Golden State Warriors?

Despite a blowout against the New York Knicks, there are offensive issues abound for the Golden State Warriors.

Share All sharing options for: What in the offense's name is wrong with the Golden State Warriors?

So I gave it away in the title. Have to get my reader count up by swimming against the general current, ya know?

In all seriousness, we all understand the rebounding, giving-up-the-wide-open-three-ness, lack of energy, and general lack of defense on that side of the floor. But while focusing on the aspects of the game the Warriors were going to struggle in this year regardless, we might have overlooked a key missing piece of the team: a slasher.

Yeah, like a Russell Westbrook, James Harden, Dwayne Wade, and LeBron James. Not possible? Fine. How about a guy who can get into the paint at will and finish? Ty Lawson, Tony Parker, Paul Pierce and even a Monta Ellis (just trolling), for example.

Getting the point? The Warriors don't necessarily need these players to win games but they could use another playmaker/slasher off the bench to help the team when they can't shoot. But they don't operate that way offensively, instead choosing a somewhat backwards working offense.

The Dubs currently average the third-worst attempts at the rim, with 22.4 attempts per game, according to Hoopdata.com. To contrast, they average the 10th most from 10-15 feet (seven shots per game), and seventh most from 16-23, the dreaded long two, with 21.7. They counteract this a bit by shooting 20.3 threes a game, good for 11th most in the league, but when you are the best shooting team with Stephen Curry and Klay Thompson, 20 isn't enough.

To summarize, the Warriors shoot 81 shots per game, with more than 35 percent of their shots coming from 10-23 feet. Combine that with the fact they shoot such a low amount of shots at the rim and not enough from three, it's hard to compensate for such low-percentage shots.

But I get that, this team is a jump-shooting team first and foremost. If you coached a team with Curry, Thompson, Lee, and Jarrett Jack, you'd want to game plan for the shots your players want to take. We certainly don't want to see Steph and Klay drive blindly to the basket every possession down for the sake of emulating the Houston Rockets.

One way to fix this? Shoot the hell out of the three-ball. The Houston Rockets score the ball at such an efficient level because of their spread, drive-and-kick game where players like Jeremy Lin and James Harden drive incessantly to the basket to get shooters like Chandler Parsons open shots. Hell, when Donatas Montiejiunas has the freedom to jack threes up, you know people love this system and most importantly, it's working. The Warriors offense essentially functions backwards, working the spacing on the floor because of the fear opponents have guarding Curry. However counterintuitive it may be, it's worked to an extent because it stretches a defense sideways. Running through double screens for two different players every time down the court is no easy task.

But Curry and Klay are shooting relatively slump-free in their last ten games, so why have they scored less than 100 points in eight of them? First, that's not a very shrewd analysis, as pace of the game matters much more in the grand scheme of the offense. However, the Warriors play the sixth-highest pace in the NBA, scoring 101 points per game. Second, the Dubs also played a majority of those games without Bogut who, while not offensively active right now, is a step above Biedrins and Ezeli.

Then what explains the inexplicable lack of offense from the Warriors for long spurts of games, usually turning a small deficit into an insurmountable one? Sure, jump shots are varied. You can spring wide open on a pindown, rotate the ball perfectly in your hands, release the ball at its apex, and still miss.

Instead, it's been the play of Jack and Bogut that's been slowing the offense down to a halt. For one, it's the cursed R-word (regression) and the other, a combination of injuries and conditioning.

I covered the career of Jack and his mid-range jumper here, and needless to say, he hasn't played well as of late. Ever since his massive game against the San Antonio Spurs, he's struggled to the tune of 34.5 percent shooting while turning the ball over 27 times compared to just 45 assists in 11 games. 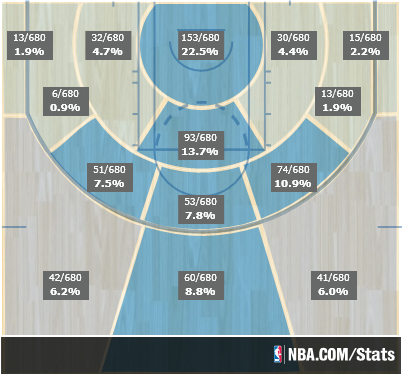 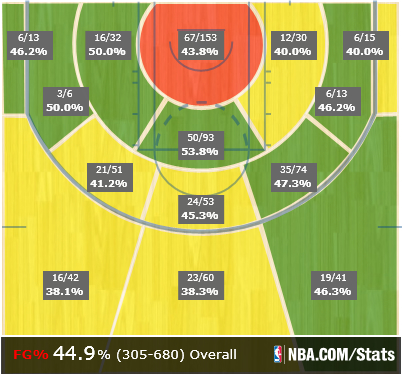 Jack shoots nearly 40 percent of his shots from the long two area. While that isn't necessarily bad when he's making most of them—as he was in the beginning of the season—he's regressed to the mean in the second half. Overall, that's not so bad, but it's coincided with the current offensive struggle. Will this change? Probably not, as he's averaged more shots from 16-23 shots in three of the past four seasons. If that's too small of a sample size for you, go watch the last terrifyingly bad couple seasons of The Office.

Those mid-range numbers are above league-average so it doesn't appear Jack will stop shooting them anytime soon. Even if they weren't, it's unlikely he'd change his play eight years into his career. He's shooting the same shots that endeared him to Warriors fans, he's just missing them. The Warriors will have to live with his long jump shot tendencies for the rest of the season and they'll have to hope his usage rate and efficiency numbers own a positive correlation for the rest of the season.

The second cog of the mystery to the Warriors' struggles comes from a player brought in for his defensive prowess: Andrew Bogut. His first game back, we saw a converted hook shot in the post and a tic-tac-toe pass from Curry to Lee to Bogut. From then on, we expected the offense to progress to a level we haven't seen since the "We Believe" years. The only difference was that the offense would sustain itself this time because of the steady low-post play of both Lee and Bogut.

And of course, it's chart time. 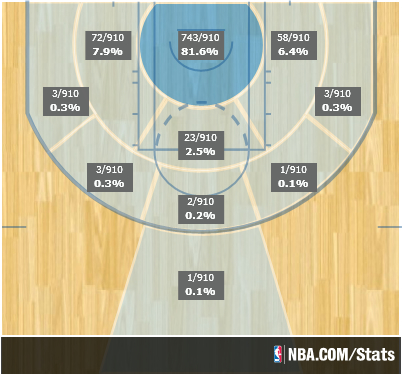 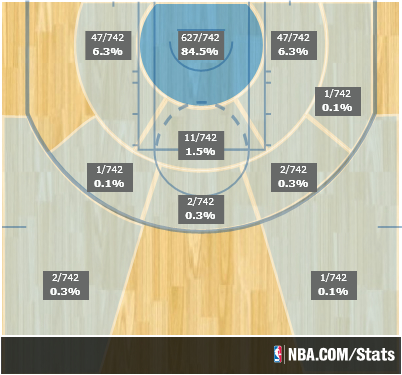 At this point, I don't even care whether he scores efficiently in the paint at all, but whether he is shooting it or not. In the two seasons he was relatively healthy and at his peak he averaged over 80 percent of his shots in the paint, averaging 14.7 and 11.6 shots a game per 36 minutes, respectively. The man lives in the paint.

This season? Not only is he averaging a measly 8.6 shots per 36 minutes but he's also shot a career-low 46.4 percent in those minutes. NOW we can get to your small sample size caveat but simply put, he isn't healthy enough to pose much of a threat on the low block. The percentages aren't as important as the process in which he's gone about missing these shots. Too many times this season Bogut has looked to pass under the basket rather than going up. Going to Bogut in the low post or pinch post area now is just another way of starting a play for Curry or Thompson instead of letting Bogut initiate and create the offense for others.The backwards offense of searching for long jumpers unfortunately lives on.

Bogut's interior presence was supposed to lessen the load on Lee's shoulder in paint scoring but it's been quite the opposite. According to nbawowy.com, Lee's effective and true shooting percentage with Bogut on the floor are 45.6 and 51.2 percent, respectively. His numbers without? An effective and true shooting percentage of 51.5 and 55.6, respectively. Sure, they haven't played many games together but this is a trend worth keeping an eye on. Bogut and Lee are both excellent interior passers but that becomes stifled to an extent when defenders cease to double-team the big man. When Bogut is forced to go one-on-one against a lesser defender and he can't score, opponents start to trap and cut off Curry's shooting lanes. Hence the quick double teams Curry is attracting before the pick even gets there.

WIthout the threat of a true post presence, defenses can essentially have free reign on the defensive end. This isn't the absolute answer as to why the Warriors have been struggling on offense but it's a trend to keep an eye on when you watch them struggle to create good shots in a five-minute stretch of a game.

All stats brought to you by NBA.com/stats.