The Warriors came out strong on Bollywood Night and beat down the Knicks by 29 points.

To borrow a line from the legendary Wu-Tang Clan from the big NY, can it be that it was all so simple?

It just looked too easy tonight, but I guess it can be that simple. So why was it so simple?

You have to give the Warriors a lot of credit for holding an opposing team to under 65 points and 27.4% FG. You really have to wonder how it's possible for a veteran Knicks team to even shoot that poorly though. At first I thought maybe it could be attributed to the Knicks being on the West Coast and playing the second night of a back-to-back. The problem is they didn't play last night.

So what's the explanatory variable for the Knicks' poor shooting tonight? I'm not really sure. Do you know?

I was watching PTI (sorry a guilty ESPN pleasure) and I believe it was guest host Bob Ryan that noted JR Smith keeps both teams in the game. It's funny, but there's quite a lot of truth in that statement. Look at what happened tonight. I would wager that if JR Smith didn't get so frustrated with Harrison Barnes posting him up and get that stupid flagrant 2, this game would've been a lot closer. JR's the type of player that can ball hog score his team back into any game.

I don't think it was until Steph's fifth three-pointer tonight that the Knicks decided to double-team him and trap him on the corners. I wonder if they forgot about this: 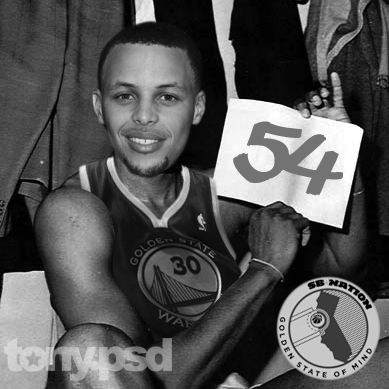 Anyhow, give it up to Curry and Klay Thomson for the red hot shooting, especially beyond the arc. 10 for 17 from downtown is getting it done and on most nights is probably enough to win it.

Bringing It on the Boards

In spite of the 54% of a Wilt Chamberlain the Warriors lost to the Knicks 2 weeks ago. A major reason was the difference on the glass. Tyson Chandler collected a dominating 28 rebounds and the Knicks won the battle of the boards 46 to 38.

Tonight the Warriors dominated the Knicks with 59 to 42 rodmans. Who knew all it would take was swapping out Andris Biedrins and Draymond Green in your starting lineup with Andrew Bogut and David Lee? (Okay, well everybody.) Chandler by the way was held to only 8 rebounds tonight.

(Side note: Do you remember when Warriors fans can at least could try and argue that Andris Biedrins was as good,if not better, than Tyson Chandler? Try arguing that now and not getting laughed out the arena.)

Props to the Warriors for putting on another fun Bollywood Night. They did a fantastic job with red, blue, yellow, and green t-shirts draped on alternating sections of the arena. It had a real deal Holi feel to it. The Indian food they served wasn't all that bad either. It sure beat their usual food. (Side note: Is it just me or has the food at games been especially the bad the past year or two?)

Stephen Curry, Klay Thompson, and David Lee are all very deserving, but I thought I'd award this one to Andrew Bogut. I can't remember the last time I saw someone have +35 in the box score and have more fouls (5) than points (4). It's the rebounding (11), thievery (2) and presence of course that make the difference.