Golden State Warriors rookie Harrison Barnes answers a few fans' burning questions, like why he doesn't need to get mad to get pumped, and why he doesn't wear white shoes during home games.

Share All sharing options for: Harrison Barnes doesn't need to get mad and has no white shoes

Last month, we took some time out with Jarrett Jack to answer some "important things that don't matter". You know, some of the things that you guys bring up during Game Threads. This morning, I got a chance to speak with rookie dynamo Harrison Barnes.

PMC: Golden State Of Mind is one of the biggest Golden State Warriors fans blogs out there, and fans want to know about important things like nicknames. Now, we know that you got "Black Falcon" from ESPN, but are you aware of the Blue Falcon, the cartoon character back in the day with Scooby-Doo [crossover epidodes, the dog character below is Dynomutt]? 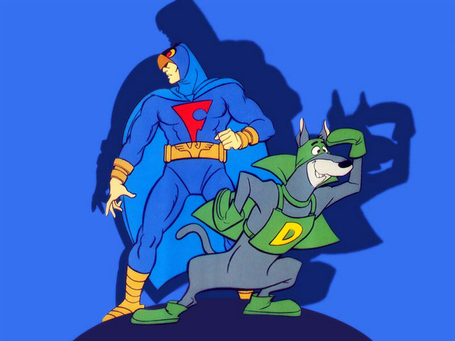 HB: (laughs) Nah, one of our guys that works upstairs named Jocko [somewhat inaudible], he actually gave me a comic book of a guy named The Falcon. There's all types of stuff; I don't know where they get it from. 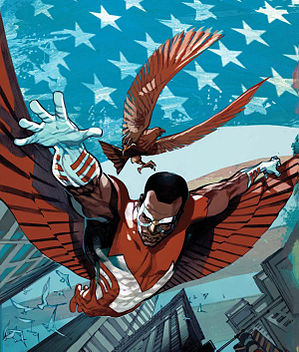 PMC: The other question that a lot of fans have is, have you ever gotten mad in a game -- you have the stoic approach, composed, some might say calm, but have you ever been provoked on the court at all?

HB: No question. I mean, throughout the course of any game it can always get a little chippy.

PMC: A lot of fans are like, "You gotta get more energized!", but then again some players play better when they're more composed while some players need that spark, how do you feel about that?

PMC: So that doesn't really affect you, say, negative emotions fueling you, it's a bit different for you?

HB: Whether you're happy or sad or whatever, it really shouldn't affect my play.

PMC: The last random question that fans have is, they noticed that you haven't worn any white sneakers at home. Is that on purpose?

HB: (laughs) I don't have any white sneakers. I always just wear my blue shoes. I've had some good plays, some good luck with these shoes.

PMC: OK, well then we'll have to do a fan mail-writing campaign to Adidas to get you some white shoes.

HB: (laughs) I appreciate that, that'd be nice.

[Elapsed time: under 3:00 -- mission accomplished! One thing about HB, though, if I were qualified to say, is that he tends to speak very fast. He's difficult to transcribe and I'd recommend to him that he slow down in his answers.]

When Barnes makes a spectacular play, we think that he's transformed into The Black Falcon and that's fun to talk about, but obviously he's just being himself and I'd be surprised if he wasn't looking to make all the supposed "Black Falcon" plays the norm. Again, that's outside the scope of what we're doing here today with these 3-minute/4-question "important things that don't matter".

And while we're on the topic of his nickname, let me point you to some brilliant writing from a UNC Tarheels basketball fan site, TheBlackFalcon.net on the very topic of that nickname in the context of HB's play.

There are other good questions out there about HB, such as Ivanbe noticing a downward-trending rebounding rate, aliu27 wondering how his confidence level has changed throughout the season, and @kingofmyworld asking if HB not being the primary option has actually helped his development. We'll get to those via game flow and postgame locker room opportunity.

Thanks for reading. I'll be at the Houston Rockets game tonight (preview) but primarily tracking down Jeremy Lin for thoughts on his SF premiere of Linsanity (sold out!) next week at CAAMfest. However, you can always tweet me or post in the Game Thread questions you might want me to ask any particular player in the locker room and I'll try my best.