The Warriors square off against the OKC Thunder on TNT Thursday Night NBA. Remembering Charles Barkley's role in WE BELIEVE. 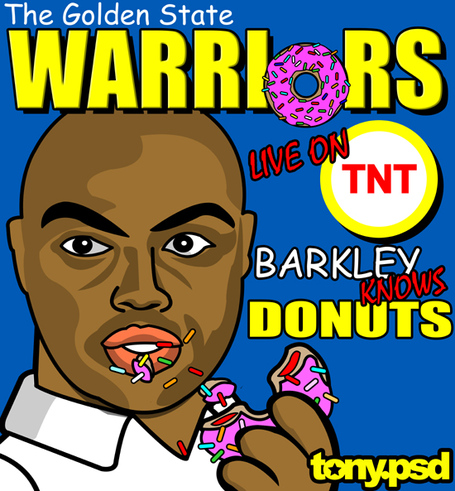 How can you not love the Chuckster?

When I reflect back on the Unbelievable, Unforgettable and Unstoppable Baby WE BELIEVE run back in 2007, I can't help but remember the big role TNT's Charles Barkley played. Let's go back..

On Sunday night the Warriors beat the Mavericks on the last game of the opening weekend of the 2007 NBA Playoffs. There's a ton I vividly remember about this game, but there's one image that I'll never forget when the TNT cameras zoomed in on the Dallas crowd: 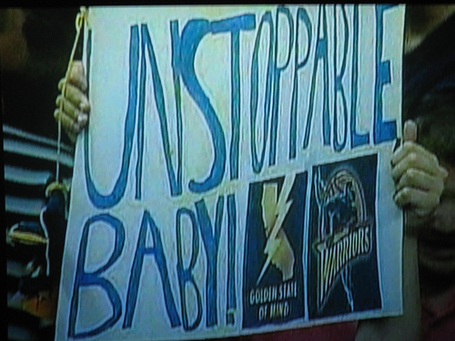 Longtime GSoM friend, Adonal Foyle fan, and Welcome to Loud City founder Zorgon representing at Game 1 in Dallas back in 2007 for the TNT cameras.

Zorgon and GSoM are big time!
He made it on tv not once, not twice, but three times with his awesome Unstoppable Baby sign. Atma first noticed it on the Diop free throws in the 4th quarter. Then during the Stephen Jackson post game interview, we saw him again. Lastly, KTVU news showed his sign on their 10 o'clock news. Sweet. Props to Zorgon for reppin the Warriors and GSoM big time in enemy territory.

The Warriors could've easily taken another one in Dallas in Game 2, but as my man Hash wrote our fellas were victim to a Lack of Control. Then Barkley vs The Bay happened:

There were two things the name Charles Barkley was synonymous with for longtime Warrior fans. The first was the classic Nike barbershop commercial in which the last Warrior All-Star Latrell Sprewell and then rookie sensation Chris Webber were joking about CWebb's thunderous fast break dunk on Chuck. The other was Barkley's amazing 56 point night in Game 3 of the Warriors and Suns 1st round series in Oakland back in the 1994 NBA Playoffs that was the last taste of playoff hoops for the Bay Area in over 12 years.

After the Mavs took Game 2 on TNT's post game show Chuck said the series was over and the Warriors were going to lose the next 3 games straight and be gone fishing before everyone knew it. Barkley went on to crack a few jokes about how the small ball Warriors were just midgets. Well us Bay Area folk are knowledgeable hoops fans. We don't forget our history and we sure weren't going to forget the midget jokes. Maybe it was a Napoleon-like complex from the Dub following, but the humorous war of words and pictures that transpired next between the Bay Area and Chuck was pure comedy.

In the 4th quarter of Game 3 with the Warriors blowing out the Mavs chants of "Barkley sucks! Barkley sucks! Barkley sucks!" emerged... and wouldn't stop. Chuck heard it from the packed Roaracle Arena crowd that night and for the rest of the playoffs. Let's just say Charles wasn't going to take the clowning from the Warrior faithful quietly. He started taking outrageously funny shots at the Bay Area for being hillbillies. Bay Area folk kept the joke running by conjuring up some classic drawings of the Chuckster "living life up to the fullest" here in the SF, OAK, SJC triangle.

What made it so funny was that deep down inside everyone knew it was all in jest and how absurd both sides were being. Barkley was just doing his job as a studio analyst and trying to make an entertaining prediction and Warrior fans were just clowning around. Chuck couldn't seriously believe those things he was saying about the Bay- or at least I hope not!

Charles Barkley is a huge part of my WE BELIEVE memories and here's hoping he plays another big role this spring as the Warriors make another fun and crazy PLAYOFF run.

I guess there's a good game on tonight too- a real good one in fact with the Thunder at the Roaracle on TNT Thursday Night with the Warriors fighting for the 6th seed. If that doesn't get you excited you have no claims to Warriors fandom.