The Golden State Warriors lost to the Los Angeles Lakers. And a bunch of other stuff happened. 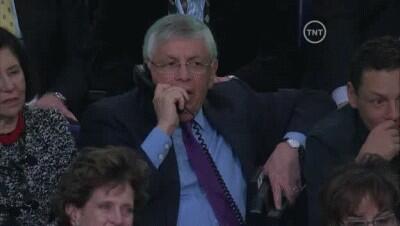 @billsimmons No team in Basketball Ref's database since 1986 has had 50 FTAs and 3 ORebs in a game.

Kobe has a probable torn Achilles. MRI tomorrow to confirm.

Kobe: "I can't walk. I've never had to deal with something like this." Had tears in his eyes throughout the interview.

I can't even process what's happening in those four images.

I went through three highly emotional stages of basketball in one game. Usually, you'd be lucky to go through even one, especially in the latter stages of the regular season and your team already in the playoffs or tanking. Whichever is likelier.

We had the pleasure to experience one of, if not the craziest, basketball game of the year with subplots enveloping new subplots, a fresh wave of adrenaline and awe shocking the system with each and every possession, pushing us to the edge of our seats.

Stage one: Golden State Warriors fans know this one well. The Stephen Curry volcano stage. He started the game hot, burying three after three in Steve Blake's face and never let up. It was Madison Square Garden again, with the same conclusion. Curry was making spinning layups in the lane, threes with his body akin to that of a contortionist and fearless enough to fire away 4-on-1 transition threes. There was no stopping the guard from Davidson.

Perhaps the most striking portion of his game was the fact that he didn't force any shots. He pick-and-rolled the Lakers to death by feeding Lee and Landry on pops and rolls to the basket. For a shooter as great as he, his play-making is as underrated an aspect as it gets in the NBA.

Stage two: This wasn't 2002 Lakers vs. Kings. This wasn't the playoffs and the difference in styles of play between the two teams were extreme. The Warriors were missing Bogut and the Lakers knew this. They attacked David Lee relentlessly with Pau Gasol. And it worked. They went into the paint relentlessly. And it worked. It was a torrent of length and skill that the Warriors couldn't possibly contain.

50 free throws wasn't so much the story as was the process in which they got the calls. When Dwight Howard is on your team, you'll get your fair share of calls. In fact, one can argue that he doesn't get enough calls because of the referee's assumption that he can sustain blow after blow from smaller players.

But not tonight. The Lakers got essentially every whistle on jump balls, loose balls and Kobe dribble-drives. The Warriors don't take it to the basket much and it showed in the disparity between the two teams. The refs blew calls both ways; ticky-tack calls against Klay Thompson and vice versa. It's just not in the Warriors' DNA to repeatedly take it to the basket, despite the weak Lakers' defense and it showed.

The refs were atrocious, this much is true. Were they a bit biased? Perhaps, probably so. But they weren't the sole reason the Warriors lost this game. Curry and company had a large lead and blew it due to the fact they could not execute late in the half-court offense. Curry shooting four shots (counting the full-court heave) in the fourth quarter is unacceptable. Jack's propensity to play tunnel vision-style basketball cost the team late. That type of play has been commonplace all season but it bit them hard when Curry was so electric all night. The last play was a pick-and-roll with Landry when Lee was a better shooter. The refs were bad but Mark Jackson's mistakes cost the team as well.

Lastly, this wasn't fixed. That's blasphemy. If you want to tell yourself that, go ahead. It won't change anything. Referees normally help the team that's more aggressive and the Lakers were that team, with or without Kobe. They just had a really bad night. It's sad that it happened under these circumstances, or at all.

Stage 3: I'm not a Lakers fan. Hell, I'm not really a Kobe Bryant fan. But I sure as hell am a basketball fan and this injury was horrendous for everyone. This obviously isn't important in the grand scheme of our everyday life but relative to basketball, this is as sad as it gets. If stage one was happiness and stage 2 anger, then this has to be grief.

But if there's one thing ANYONE should know if they've watched Kobe throughout his career: there is no f***ing way he's going out like this. Any hints at retirement are as much bullcrap as a referee whistle from tonight. I don't know anything about Achilles injuries but there's no way Kobe is going to lay in bed at night and think about how he averaged 27.3 points per game this season and walk away.

The chances of that happening are the same as me outshooting Curry on any night.

Houston lost so the Warriors are still ahead of them by a half-game for the sixth spot. That is semi-good news even with the Rockets playing the Sacramento Kings next and the Warriors having to play the San Antonio Spurs.

But we'll remember this game not for Curry's shooting explosion, Klay's playmaking success or even the referees.

A legend went down tonight. This won't be the first or last piece on Kobe but it is no way a eulogy. He put his heart and soul in the game and if you have a basketball heart and soul too, tonight's a night dedicated for him.

And make no mistake, he'll be back. That's about the only good news for anyone tonight.