The Beginner's Media Credential Experience III: The Warriors' Extended Family, Anatomy of a Recap Part 2 of 4

This is the second part of what I've changed to a four-part series (was three) on what it's like at a Golden State Warriors game behind-the-scenes at Oracle.

Share All sharing options for: The Beginner's Media Credential Experience III: The Warriors' Extended Family, Anatomy of a Recap Part 2 of 4

This is the second part of what I've changed to a four-part series (was three) on what it's like at a Golden State Warriors game behind-the-scenes at Oracle. Yeah, I know. Four parts seems a bit long, but I'm just trying to be informational, as I doubt this has ever been written about before and provides you fans with a great look at how your favorite beatwriters produce that standard (read: under-appreciated) work of art that has become known as the post-game recap. If you like this stuff, read on. If not, no bother.

Here are the parts: 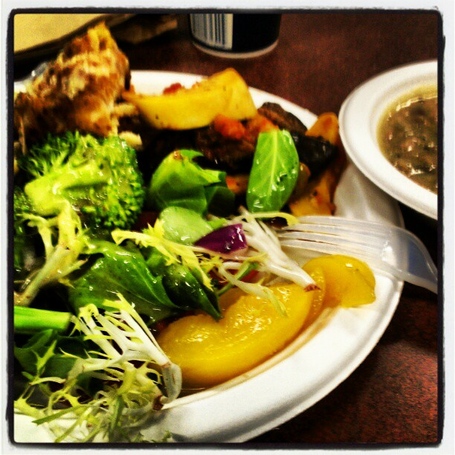 My ritual has become this: during the game, I'm probably going to end up tweeting and posting to the GSOM Game Thread a ton. I'm quite sure at every game, I tweet and post the most out of anybody with a media credential. To me, there's nothing like watching an NBA game, while following everybody's witty/funny tweets, plus participating in GSOM commenters' witty/funny posts. We'll get into that later in Part 3. Bottom line is, a pre-game meal is essential for me. So at about 6:30PM, I head on over from one of the locker rooms to the Media Room to buy me a Meal Ticket.

Literally, that's what it says, matching the Warriors blue font, on the little piece of cardboard: "Meal Ticket". Whereas most of the beatwriters seem to not want to partake in the grubbin' (perhaps a few of them are writing pre-game articles or checking Twitter in the room with the cubicles), I find the Warriors' media dinner buffet quite a bargain, actually, at just seven bucks. Now, my only reference point as far as NBA arena media meals would be the pre-renovated Madison Square Garden buffet they had for us before the 2010 NBA Draft. This one at Oracle blows that out of the water. However, let's not get carried away. When you hear the word "buffet" you're probably envisioning "wedding banquet" or even the exclusive Warriors Courtside Club "feast". So if the Courtside Club feast is a 10 on a scale of 1 to 10, my Meal Ticket is probably a 6 or 7.

Since I'm covering all bases in this behind-the-scenes look, I'll go ahead and tell you how it goes. You start on the right and make your way left, hand the lady behind the counter your Meal Ticket, grab your disposable utensils/plates/bowls, and get your soup first, then your salad, then the all-important meat, veggies, and carbs. There's extras like fruit (oranges/apples/pears), cookies, and coffee, all of which are consistently slightly below average in quality. So the hit-or-miss is with the meat, veggies, and carbs. The best, by far, has been the Chili Verde Chicken Meatballs. That is Courtside Club-worthy! I'm not a picky eater so most times, to me, seven bucks is a great deal especially if you're a former amateur athlete (i.e., you played in at least two rec leagues per week) like me and require seconds, but sometimes you feel like you got what you paid for. 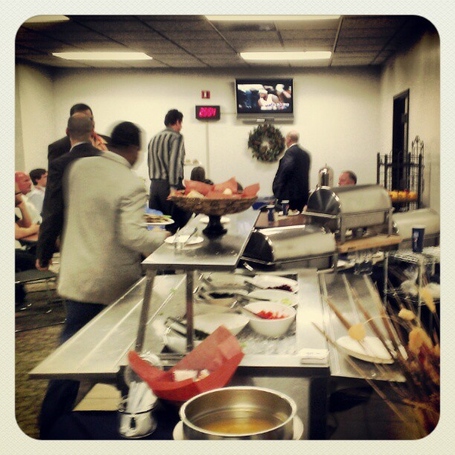 Btw, the soda machine across the way is at times a point of contention. You can get all the Pepsi-branded aspertame you could ever ask for, but the ice never seems to work and the beatwriters often lament about that. Anyways, I always stick with water, so it's a non-issue for me.

The intimate media dining room, which feels no bigger than, say, two "the-painted-areas" (aka the "key" on a basketball court) put side by side, is where you might strike up a conversation with the venerable Art Spander, or can always catch Jim Barnett (he leaves early with the obligatory TV-induced, "Gotta go floss my teeth!") and, on occasion, Tom Tolbert or Garry St. Jean. It's great to hear them talk about basketball and their seemingly limitless experiences around the NBA. There are other people besides Warriors media personnel, such as members of the Flying Dubs (the Warriors dunk team), game operations staff like Jim Maher and Charles Howard, random local agents like Ara Vartanian, and, of course, visiting beatwriters and broadcasters.

Visiting personalities isn't something you think about before heading to Oracle, but next year I'm probably making a point of it to strike on such opportunities. The best example is Walt "Clyde" Frazier. About two weeks ago when the New York Knicks came into town, on my way to the adjacent work room of cubicles, I found an empty chair, draped with a colorful purple blazer turned inside-out, sitting in front of an unattended plate of food at one of the four small round dining tables. It was as if The Joker had momentarily left to go scheme on some crime he just thought up. After putting my stuff down at a cubicle, I returned to see the great Frazier enjoying his meal alone, like a giant daddy long-legs spider claiming the table as his temporary home. 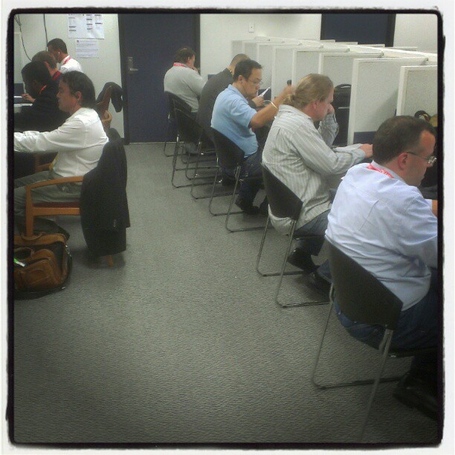 Next to the undersized (non-HD) LCD TV screen, which will typically be playing the latest NBA or other sports game currently going on, is a four-digit shotclock of sorts which counts down how many minutes and seconds we have before the Warriors game starts.

Meanwhile, in the work room you can find Marcus Thompson, Rusty Simmons, Marc Spears, Geoff Lepper, Ryan Leong, Tim Kawakami, and Steve Berman busy hacking away at their pre-game articles or other activity. Occasionally I'll chat up Ethan Strauss about some Warriors debate. For example last week, according to you fans tweeting or posting on GSOM, it was about whether or not Stephen Curry should play on the bad ankle. Strauss, who has been in the game long enough now, posited that the status of the ankle might have been a shell game being played by the Warriors, as they were facing the Lakers in an important game with playoff implications.

Sometimes when the Warriors are giving away "swag", you can find a t-shirt or golf putter cover waiting for you at most of the cubicles, if there are any left, courtesy of the PR guys. 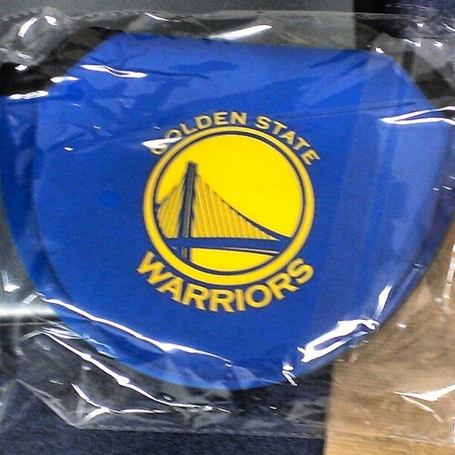 Thompson usually has his "Beats By Dre" headphones on, so the only opportunity I have to steal his swag without interrupting The Maestro is to threaten doing by tagging him on Twitter. He let me have his Los Angeles Lakers media guide when they were in town last week, though.

As the media shotclock winds down to about 12:00 minutes to go, most beatwriters are not in any rush to get to Press Row. I suppose there's really nothing to talk about during pre-game intros or the singing of the national anthem.

I like to make sure I have my laptop and cellphone plugged in and wifi working well ahead of tipoff, so I'll head out to my seat on Press Row in time for the intros, which are always a spectacle at Oracle. It's also a lot of fun to walk through the tunnel and by courtside past the Warriors bench.

[NOTE: Many behind-the-scenes photos can be found on my Instagram: @poormanscommish]