Before totally shifting focus to keys for the Warriors in Game 2, a look back at how they performed in the final 11:33 of Game 1 and what hope that might provide us playoff-starved fans for the remainder of this series.

Most people assume the Golden State Warriors are done at this point with news of David Lee's season-ending injury.

Lee is the team's lone All-Star, Kenneth Faried will be returning in Game 2 for the Denver Nuggets, and ESPN floated this little nugget on Saturday evening.

Most people thought the Warriors would be losing this series to begin with and the forecast just got even bleaker with the loss of Lee.

Andy Liu already laid out some of the key questions and lineup decisions for the Warriors this morning. But for the optimists among us who wish to maintain a Golden State of Mind, the way the Warriors played without Lee on Saturday night might hold a few glimmers of hope.

The good: The Warriors beat the Nuggets with Lee out of the game

After Lee left the game with 11:33 left in the fourth quarter, the Warriors actually managed to outscore the Nuggets 30-26.

Yes, I know that points aren't a great measure of quality but a closer look really helps to show something important: the Warriors played just about well enough to beat the Nuggets on their home floor in a playoff atmosphere. Not bad.

The Warriors surprisingly dominated the boards during the time of Lee's absence (50% offensive rebounding rate), which is an advantage that should be diminished to some extent by Faried's return.

But most encouraging was how well they shot the ball: despite a number of broken plays without their primary pick-and-pop option, the Warriors managed an effective field goal percentage of 77% during that time (12-for-20 from the field). It certainly helped that Curry woke up from the shooting funk he was marinating in over the first three quarters before shooting 3-for-7 in the fourth, including 2-for-4 from 3-point land.

Many people said before the series that the key for the Warriors would be Curry and Klay Thompson's shooting from long-range and although they didn't really have both of them firing on all cylinders at the same time, they were still very effective in some ways offensively with one of them hitting and either Curry or Jarrett Jack distributing the ball.

So, miniscule sample size and unique circumstances notwithstanding, the Warriors' problem wasn't scoring with Lee out. And the most visible problem had a name and face.

Andre Miller went 7-for-10 from the field and 3-for-5 from the line to score 18 points in the fourth.

If you're really looking for what happened, it's impossible to ignore Andre Miller. He just absolutely went off on the Warriors in the fourth quarter. Coach Nick already went over what happened during that time in depth and you should definitely go review that video, but there's a silver lining to this too: there's no way that Miller repeats a performance like that over a quarter, half, or game again this series.

That's not to take anything away from Miller's veteran savvy or the way he carried his team offensively in the fourth quarter, but I feel safe saying that it's unlikely that he'll shoot 70% for a quarter again (or that Jarrett Jack will go under every single screen against him again). 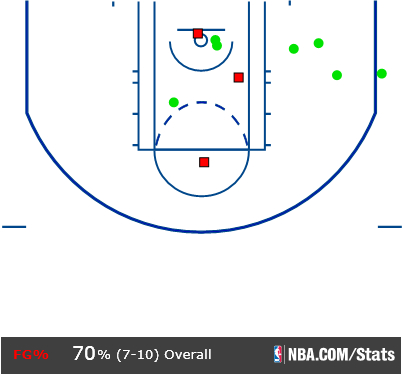 Andre Miller's shot chart in the fourth quarter of Game 1 against the Warriors.

So, as Coach Nick described at length, stopping the Nuggets' guards is mostly a matter of who's matching up with who in Game 2 and how they play screens (and wide open shooters on ball rotations). Those are things that the Warriors would have to correct with or without Lee in the lineup and if Miller keeps playing like that, more power to him.

Still the biggest problem - and arguably the most persistent in this season series - for the Warriors wasn't necessarily shooting or defending Miller, but controlling the ball when they have it.

The ugly: Warriors turned the ball over 6 times in 8 minutes without Lee

Warriors' entire offense changes when DLee's out... and now it has to change for the rest of this series.

And what really stood out in Game 1 was how all that manifested itself in the final 11 minutes without him in the game.

The Warriors committed 6 turnovers in the final eight minutes of the game and all - except two maybe - were due to Lee's absence.

Those four turnovers occurred in a four minute span. And though two of them were less costly dead ball turnovers, they still were a result of what Kawakami pointed out: the Warriors simply can't expect to run the same offense with Lee out as they do with him in. Not only is it a matter of neither Bogut nor Landry having Lee's ball skills and shooting touch, but also their inability to set the pick and roll as effectively. And we're only focusing on the possessions that ended in turnovers: as Coach Nick highlighted, a number of other possessions broke down because the posts' inability to set picks.

Of course, with a few days to work on it, the Warriors might be able to work out some of those miscues that could easily be attributed to players finding themselves in unfamiliar situations while the team tried to rely on their bread and butter.

There is some hope

In short, the Warriors' ability to compete with the Nuggets in Lee's absence comes down to something that I'm going to continue harping on about this matchup: the Warriors have to narrow their turnover differential against the Nuggets and can't afford these long spells with turnover rates upwards of 20%. Turnovers has been a recurring theme for the team against the Nuggets, with and without Lee; it becomes especially difficult when Lee's proficiency at running the pick and roll is taken away and they're forced to adjust.

But our goal here is to find hope. And it lies in this rather simple fact: the Warriors somehow found themselves in a tie game with 14.5 seconds left despite a relatively sloppy fourth quarter. They actually fought back from being down seven points at the end of the third quarter to put themselves in position to win Game 1 on the road against a Denver Nuggets team that hasn't lost at home since mid-January.

I'm not at all saying the Warriors will win this series without Lee - in fact, my pre-series predictions of Nuggets in six definitely feels optimistic now. But if the Warriors can move the ball quickly to get good looks, they still have players who can knock down shots. If they can knock down shots, there are less opportunities for the Nuggets to get run outs. And if they can just execute their sets more effectively to avoid turning the ball over so often, they could find themselves in yet another close contest.

That's just all much easier said than done.

For more on the Warriors' playoff run, visit our 2013 NBA Playoffs section.