Yesterday evening I went back through Game Two in preparation for a segment on the Colorado Sports Guys Podcast with the guys from SB Nation's Denver Stiffs. Most of my thoughts on the game are captured there and in the bulleted notes on Coach Nick's video, but Stephen Curry's performance in the second quarter really stood out as worthy of further discussion.

Shortly after Stephen Curry hit a long stepback jumper over Andre Miller in the left corner in the second quarter of Game Two, TNT's Marty Snider reported that Denver Nuggets coach George Karl issued a challenge to his team.

"[Karl] said, 'You need to decide: you want to let Steph Curry play or everyone else play?," Snider reported as the Warriors were initiating another offensive possession. "And Corey Brewer piped up and he said, 'Everybody else.' They clearly know the answer, they just can't get it solved, Kev."

No more than 13 seconds after Snider finished his commentary, Curry hit his first three of the night from the right corner to put give the Warriors an eight point lead, their biggest of the night to that point and what ended up being the margin at halftime.

Curry would finish the second quarter 7-for-10 from the field with 15 points on a whole bunch of long or contested two-point jumpers to go with that lone three.

To say Curry was in a "zone" in Game Two would almost be to understate what an amazing a season he has had. He was definitely hot even by the lofty standard he's set for himself in this record-setting season, but he's been hitting shots like this all season to the point where it literally looks like he's just throwing the damn ball into the basket most of the time.

These individual performances we've witnessed from Curry this season can no longer be described as a "zone" - Curry has entered some ridiculous alternate state of existence at this point; it's gotten to a point where it almost feels unreasonable to think the ball isn't going in when he shoots it. In Game Two he looked completely unguardable, making a formal bid for superstar status by coming up big in a big game and making the obvious All-Star snub look even more obvious.

In the aftermath of that game, there's been a lot of focus on the Nuggets defensive mistakes and for good reason: they made a number of mistakes that you just can't make against a 3-point shooting team like the Warriors, especially in the second half. Yet the fact remains that the Nuggets came into this series focused on Curry, zeroed in on him Tuesday night, and still just never found an answer as he dominated the second quarter.

So why was that so significant in a Game Two in which Harrison Barnes, Klay Thompson and Jarrett Jack were all doing their thing as well? Simple: when a team puts that much emphasis on stopping one player and realizes that they're helpless to stop him, that lack of agency easily leads to demoralization, which is pretty much what Matt Moore of CBS Sports described in his recap of the game.

The Warriors just put on a clinic. They hit from everywhere, they hit consistently, and everyone got in on the act. You see this in great shooting performances. The offense hits a tough shot, the defense gets discouraged, which leads to a lack of execution, which opens the defense and allows the offense to hit another shot.

Curry's second quarter in which he was responsible for 23 of his team's 35 points as either a passer or scorer really took things from a competition to a clinic.

To bring Curry's second quarter performance into better focus, it helps to look at the shot chart. 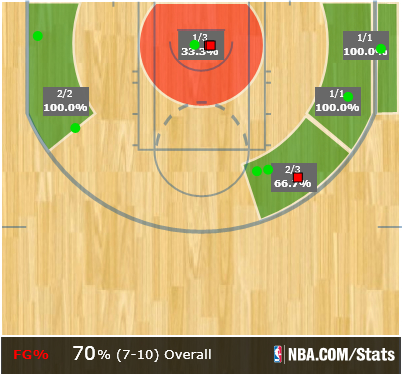 These weren't open shots Curry were getting - for the most part they were either contested long 2-point jumpers or off-balance shots on one foot.

Can Curry make those? Sure. But, as a defense, do you live with those kind of shots? You'd probably want Curry's shot chart to look something like that and just normally expect more red dots or less dots, which can usually be directly related to him missing a few more.

And that underscores the major takeaway from Game Two.

The Warriors shot almost 64% from the field in the second quarter, which I'm sticking to because Curry's performance really catalyzed the team and what came after that - stunningly, they shot slightly better for the game due to even hotter shooting in the second half (68.4%).

In addition to putting on a scoring performance that I found easier to appreciate after the fact when I was no longer in complete disbelief about the team's performance as a whole, Curry assisted two 3-point shots (Draymond Green and Richard Jefferson) as well as a jumper by Carl Landry. All told, he was responsible for the 15 points he scored plus the 8 more points he set up by drawing the entire Nuggets defense to him and kicking out.

Meanwhile, with the entirety of the defense focused on him, Curry only had one turnover in the game, which also happened to be during that second quarter.

And that was another major part of what helped the Warriors take this game.

During the second and third quarters, the Warriors committed eight turnovers of which only two were live turnovers that led directly to a transition scoring opportunity for the Nuggets. When you combine that with the team's hot shooting and outstanding rebounding, the Warriors didn't necessarily slow the game down with defensive scheming as much as just making shots and preventing points off turnovers.

That's huge against the Nuggets. And it's the reason why I keep coming back to the turnover story for the Warriors: with a team that is going to have to outshoot this opponent to win, they can be even more devastating when they're holding on to the ball.

Going back to that second quarter performance, the turnover story there is probably even more significant. And really it comes down to type of turnovers.

In Game One, the Warriors committed six turnovers in an eight minute span in the fourth quarter after Lee went down that hurt, without destroying, their chances of winning. It wasn't solely a live or dead ball turnover issue as much as it was one of poor execution and spacing: they looked disorganized offensively without Lee and made poor decisions.

During the second quarter in Game Two, the Warriors got even better with the ball: they committed just three turnovers, with two being ball handling errors under pressure that were more random than requiring correction. The third was that bizarre Draymond Green inbounds pass to...Ty Lawson...that we'll just chalk up to a rookie error for now. The bottom line is that the Warriors committed turnovers that a coach can live with - they're bad in the sense that all three were avoidable, but not nearly as bad as the type that directly result from disorganization or passivity. Their six fourth quarter turnovers reflected some major problems in adjusting to life without David Lee; you don't go into practice following Game Two's turnovers and tell Steph he needs to work on not dribbling the ball out of bounds.

The turnovers are just a theme in this series that can't be underestimated, which is why I'm beating it to death. The Warriors did a much better job of taking care of the ball in Game Two and that's no small part of what has helped to keep the Nuggets out of their rhythm: they were forced to play halfcourt ball for the vast majority of Game Two.

The fourth quarter was outstanding as well, but I left it out of this piece for two reasons: first, the Warriors did the bulk of their damage in the middle quarters and the Nuggets actually played quite well in the fourth; second, the Nuggets had dug themselves such a big hole that they really were making mistakes defensively, Harrison Barnes went off, and even Festus Ezeli was dunking on fools. I mean, I'm not going to pretend that I wasn't bracing myself for a collapse, but looking back on the ebb and flow of the game, the Nuggets really just weren't playing well enough defensively to do anything but reduce the lead - no team is going to win while being dunked on by rookies.

By the fourth quarter, the Nuggets looked like a demoralized team that decided the outcome was more fated than within their grasp. And long before acceptance, there were signs of panic.

Perhaps the earliest sign of panic that really stands out was already discussed by Jeffery Morton of Denver Stiffs yesterday: after a pair of traveling violations in the first 6 minutes of the game, George Karl benched Evan Fournier until the fourth quarter. Removing him from the game forced the Nuggets to rely on Andre Miller defensively and you already know how the next 42 minutes played out (and if you don't, Coach Nick will tell you).

From there, Karl cycled through a bunch of lineups, none of which had a chance to establish any rhythm, while the Warriors were slowly heating up with little resistance. Without Fournier (or Danilo Gallinari, for that matter) in the rotation and Kenneth Faried clearly less than 100%, the Nuggets essentially shortened their bench in ways that did them a disservice.

After figuring out that they simply could not stop Curry, it was almost as if no longer occurred to them that extra effort on defense in the second half would help them win.

The series begins at Oracle

The Warriors will not shoot close to 65% for a game in the remainder of this series. They probably won't have three rotation players shooting over 60% on more than 10 shots. If Faried is able to play at all, I refuse to believe the Nuggets will go for a 24 minute span only recording one offensive rebound.

Most of all, the Nuggets won't be caught off guard again and that's what makes Game Three so exciting as basketball fan, not just a Warriors fan.

Doc Rivers noted during his presser after the Celtics' loss on Tuesday night that the old cliché about a series not starting until someone wins on the road is corny - it is corny. When you're sitting in a 2-0 hole, something has definitely started. But in the case of this Warriors-Nuggets series, Game Three is really where this series starts: all the cards will be out on the table, the teams have had some time to feel each other out, and now both sides go in knowing what they have to do to win games.

There's really no reason to come into Game Three completely unprepared. A lot of the major questions have been answered. From this point on, it comes down to how well each team is able to execute its game plan and, of course, whether the Nuggets can find any way to stop Curry other than hoping he misses shots.