I honestly don't know if I can sleep tonight or function at my day gig tomorrow. I can not contain my excitement for the Warriors 1st home playoff game in SIX years!

I honestly don't know if I can sleep tonight or function at my day gig tomorrow. I can not contain my excitement for the Warriors 1st home playoff game in SIX years!

(Before I bring the hype, I'll get this out of the way. I've been a part of the media industry for almost 9 years now and one of the unwritten rules is to not call out other media outlets. Please grant me this exception. I'll excuse ESPN for demoting the Dubs to the deuce, since they're big NY/Boston/ LA proponents to put it lightly, but how does KNBR bump this PLAYOFF game from 680 to 1050?)

I'm admittedly a serious sucker for some retro nostalgia, so if you don't mind I'd like to go back to Game 3 at home back in 2007. From The W Column's Unbelievable, Unforgettable, and Unstoppable Baby! piece:

Game 3 in Oakland: The best fans in the league

After getting a series split in Dallas, the Warriors came back home for the first playoff game in Oakland in 13 years. All the energy that Warriors fans had building up for over a decade manifested itself that Friday night at the Oracle Arena. The Warriors' organization gave new meaning to the We Believe fan generated theme (Paul Wong will go down as a legend in the Warrior history books) by outfitting the entire crowd of 20,629 with those unforgettably bold and stylish golden yellow We Believe t-shirts. It was amazing that even with the crazy 880 Friday rush hour traffic thousands of Warrior fans were actually at the arena way before the 7:30pm start time for the game. Twenty minutes before tip off Warrior fans were already packing the stands in their bright tee's chanting "Let's Go War-ri-ors! Let's Go War-ri-ors! Let's Go War-ri-ors!"

The Warriors went on to blow out the Mavericks that night showing heart and the power of the Golden Crowd. But the fun didn't stop for fans that night. During my entire BART ride home (take BART, don't pollute!) folks were chanting "Let's Go War-ri-ors!" and at every stop when the BART doors opened everyone in unison turned up the decibel level another notch with their cheers. Other towns do some silly things when their teams win, but us folks in the Bay? We unite like Voltron on public transportation trains and platforms! 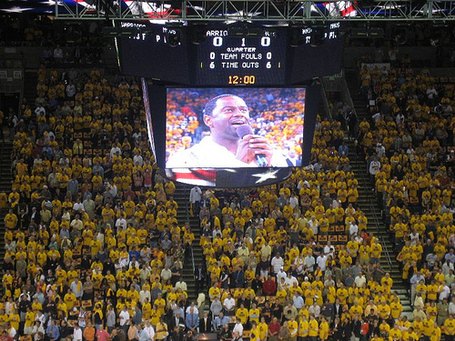 Brian McKnight got that party started right. I wonder who will be the guest of honor tomorrow night. Here's one vote for Raphael Saadiq! 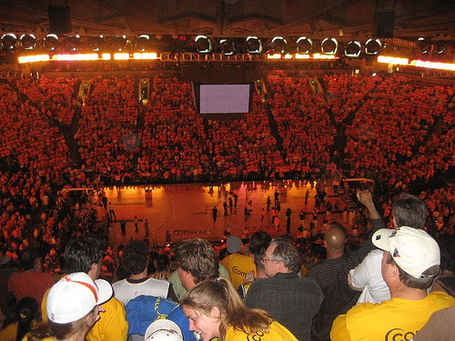 The Arena was HOT LIKE FIRE! I expect tomorrow night will be even crazier. 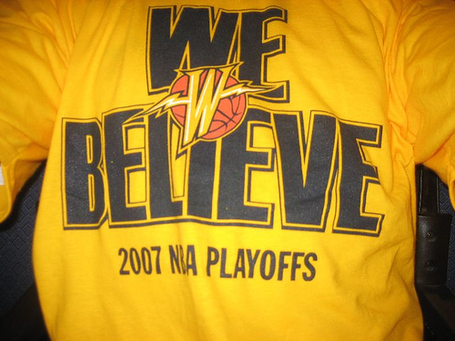 WE BELIEVE the 6 year break will be worth it...

Here's how I see tomorrow night:

I am not worried about Stephen Curry's ankle.

I am not worried about mastermind George Karl concocting some type of 90's Seattle SuperSonics defensive scheme to stop Steph.

I am not worried about David Lee's absence at the 4 spot, though he will be missed.

I am worried I will lose my hearing and voice tomorrow night though.

If you can't make it to the Roaracle tomorrow and you have to catch the game at home, I have a special present for you. Please check out a little creation that two of my buddies and I put together called Beyond the Box for iPad and iPad Mini. Use it while you're watching Game 3 on TV at home and you'll have a blast.