The Warriors magic number is now down to 3. It's time to bring back the legendary Paul Wong and WE BELIEVE PLAYOFF. It can be unbelievable, unforgettable, and unstoppable again!

I know it's probably a little too early to gloat, but I have to say I find it hilarious that lots of folks predicted that the Suns would be better than the Warriors at the beginning this season. Even with Andrew Bogut playing well under half of the season, the Warriors are a superior team to the Suns. Phoenix has been unsavory like Sunny Delight this season. The Warriors on the other hand have a magic number to attain...

With any combo of 3 wins by the Dubs or 3 losses by the much maligned Utah Jazz, Warrior fans will be treated to a 3rd trip to the playoffs since 1992. I don't have to tell you, but this is quite a big deal around these parts.

Here's why: The W Column: Unbelievable, Unforgettable, and Unstoppable Baby! (10/25/07)

To go Biggie on this one- "If you don't know, now you know."

Now that the Warriors grim reapers are gone (see Polling GSoM: Can the Warriors Do It Without Us?), here's hoping Paul Wong is ready to make a comeback. We can't do it without him! 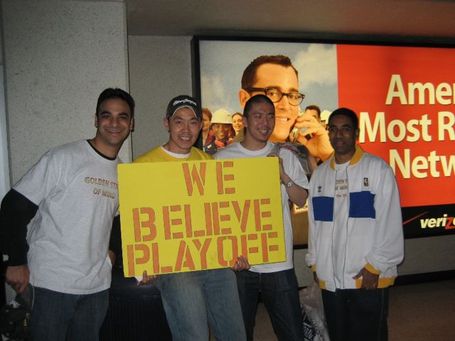 The golden era of Golden State of Mind. Man those were some good times.

Let's get this W.