Golden State Warriors vs San Antonio Spurs Game 3 NBA Playoffs Round 2 Preview: WE ARE IN IT TO WIN IT!

Share All sharing options for: Golden State Warriors vs San Antonio Spurs Game 3 NBA Playoffs Round 2 Preview: WE ARE IN IT TO WIN IT!

The San Antonio Snores have yet to win at the Roaracle Arena this season:

I expect that to continue.

Truth be told, aside from that historically awful collapse at the end of Game 1, the Warriors have been DOMINATING this series. In the backcourt, Stephen Curry has no equal. He's got the SI cover to prove it. Klay Thompson's defense (Tony Parker who?) and offense can only be stopped by foul trouble. In the front court, Harrison Barnes is causing trouble with his athleticism and shooting. Draymond Green- well, he's playing out of his mind and isn't shooting 32.7% from the field or 20.9% from downown anymore. At center, Andrew Bogut is OUTPLAYING Tim Duncan on both sides of the ball. He is owning the glass, dropping dimes, and playing stellar D.

Do you really think that's going to stop on Warriors Ground?

I don't get to say this very often, but it's a great time to be a Warriors fan.

WE ARE IN IT TO WIN IT

The Warriors have already pulled off one wildly entertaining upset in this year's playoffs against the heavily favored Denver Nuggets. The Warriors ended a 16 year losing streak in San Antonio, Curry's been on fire with 44 points and 11 dimes, and Klay's had 34 points with some sizzling shooting and 14 boards. None of this will ever be forgotten in Warriors history.

But it's not time to be satisfied. It's time to get greedy. 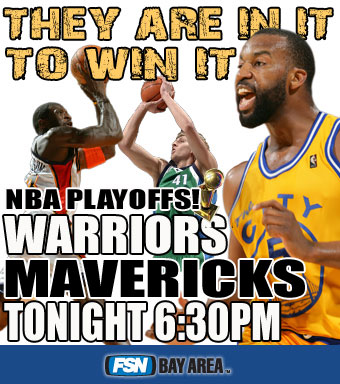 It wasn't though. It was the end. There were dumb front office moves, silly suspensions, painful departures, and the usual drama we've come to expect from the Cohan-era Warriors.

We all want to believe that this year's playoff run is just the beginning and with a new ownership group it just has to be different- it just has to be. The Warriors have a lot of young guns with upside too. But as Warriors fandom has taught me, you never really know. Any team is just a few injuries, silly roster decisions, or just bad luck from sliding back down the lows of NBA Draft Lottery hell.

It's all about NOW. The Warriors have made it to the Elite 8. They are 3 wins away from the Western Conference Finals, 7 from the NBA Finals, and 11 from letting Warriors legend Al Attles celebrate like it's 1975.