Game Links #R2G6: Golden State Warriors 82 vs San Antonio Spurs 94 - It's the end of the road, but it's just the beginning of the journey.

Share All sharing options for: Game Links #R2G6: Golden State Warriors 82 vs San Antonio Spurs 94 - It's the end of the road, but it's just the beginning of the journey.


Stephen Curry at the podium. (Load)


Jarrett Jack says other players like watching the Warriors, by BASportsGuy. (Load)


Jarrett Jack on playing for the Warriors, by BASportsGuy. (Load)


BASG asks Jarrett Jack about how much Warriors have changed, by BASportsGuy. (Load)


Final seconds of the game, by gumbywithpokey. (Load)

(right after the game)
warriors: Players back on court to thanks fans https://t.co/HKlUeYC0jq
SabinaGadecki: that's right #gsw pic.twitter.com/cluBslNs0w

(after the game)
gswscribe: Jarrett Jack, on the verge of tears, stood at his locker. He couldn't find the words, so he let his attire speak...

JARRETT JACK: "Usually before I would do any media, I would make sure I was dressed a certain way. I brought one of my best suits. But looking down at this jersey, it's just a sense of pride I don't think I've ever felt as a professional. ... Nothing in my closet is better than what I have on now."

Perhaps it was the disappointing end to a magical run. Perhaps reality had hit him he may have spent his last minutes in a Warriors uniform. But he didn't want to take it off.

When the final horn had sounded, the Warriors shook hands with the Spurs and headed to the locker room. But Jack remained. He circled the court, a towel over his head, clapping with the fans. Before long, his teammates and coaches returned. They all took a bow at midcourt before guard Stephen Curry took the microphone and thanks the thousands of fans in yellow shirts remaining.

Jack, who made $5 million this season, will become an unrestricted free agent on July 1. He played a pivotal role in the Warriors' success. But his future with the Warriors is uncertain.

He's said he wants to stay. But based on his performance with the Warriors, he's expected to get several opportunities and lots of money on the free agent market. Whether he takes the more lucrative offer else where, or whether the Warriors make a competitive offer to keep him in the Bay Area, that will all be figured out this summer.

But Jack was never more clear about where he wanted to be.

JARRETT JACK: "I hope so, man. Obviously there are other things that go into seeing if that works -- we all know this is a business at the end of the day. If I could do it, if I could rearrange it, I would definitely be back at this same locker."

- Harrison Barnes suffered a head injury in the 2nd qtr. He passed the concussion tests at halftime, so he came back out to play in the 3rd. They later took him back out of the game due to headaches.

Best Fans In The NBA 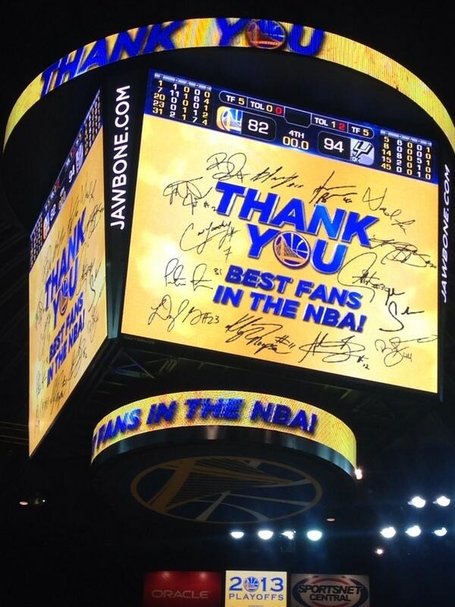