Playoff R2G6 Recap: Arghh. And thank you. And see you next season.

Share All sharing options for: Playoff R2G6 Recap: Arghh. And thank you. And see you next season.

Let's get the "Arghh" out of the way first. The national narrative of this West semifinal series will likely go that the Spurs' savvy veteran experience won the day — that it wasn't quite our kids' time — but I can't shake the nagging feeling that the series was right there for the taking. Tony Parker looked really banged up, and Tim Duncan and Manu Ginobili looked really 37 and 36 years old, respectively. Even given our injuries, lack of depth, and what looked the last couple of games to be a distinct lack of gas, I think with slightly better luck (particularly in the Game 1 lightning strike) we'd be the ones moving on to Memphis on Sunday. Realistically, I think either of these two teams would be tasty river trout for the Grizzlies; they're young, healthy, hungry, mean, and simply playing at much higher level right now than either the Warriors or Spurs. But man, it would have been hella rewarding to see our guys make it to the conference finals for the first time since the Ford administration (the year the NBA and ABA merged, Apple and the Toronto Blue Jays were founded, the Bad New Bears and the first Rocky ruled the box office, Paul McCartney and Wings "Silly Love Songs" and Elton John and Kiki Dee's "Don't Go Breaking My Heart" blasted on transistor radios, etc.)

With that squared away: THANK YOU SO MUCH, YOU MAGNIFICENT TEAM! I mean, seriously: the fact that there might even be a "national narrative" about this series shows how shockingly far the Warriors have come in such a short time. Stephen Curry — our li'l Steph! Our Binky! Our Bonehead! — made the cover of Sports Illustrated. Magic, Chuck, Shaq, Boston Sports Guy and the crew chewed the fat about the Dubs like they were lifetime GSoMers. I live in New York City, and over the last few weeks I heard dozens of people on the street and in bars talking about Steph Curry and the Warriors. Two random guys at my wife's office were waxing covetous about how much they wanted their Knicks to sign Curry this offseason. (I told her to tell them to wait at least four years, suckers!) Yesterday a random dude in line at my local deli held forth expertly on Harrison Barnes. If you can make it here, well, you know how it goes. No longer, I suspect, will I have to sheepishly disclose my favorite sports team to blank stares or replies of "er, the What State Whooziwhatsits?"

As far as last night's game ... props to a stout defensive effort for keeping it close throughout, but ultimately there just wasn't enough gas in the offense's tank to get over the hill. The Spurs' stingy D didn't help either. The San Antonio death blows were the late dagger threes by Tony Parker (career 0.5 threes per game at 31.3%) and Kawhi Leonard (1.1 per game at 37.5%) and concurrent rim-outs by each of the Splash Brothers; but with even a moderately Warrior-like offensive showing, it really shouldn't have come down to that. If you hold Parker and Manu to a combined 4-22 fg on your home floor, you really ought to win fairly handily.

I'm loath to point fingers in what I intended to be a big sloppy valentine to every member this lovable team, but dangit: with Lee gutting it out on a shredded hip flexor, Curry playing gamely on two bad ankles, and Barnes with six stitches above his eye and concussion symptoms, I wanted MOAR out of Klay Thompson last night. He followed his nightmarish Game 5 (4 pts on 2-8 fg / 2 reb / 0 ast in 36 minutes) with an only-marginally-less-nightmarish 10 points on 4-12 fg, 0 rebounds, 3 assists in 42 minutes. Legit NBA starting wings find ways to do other stuff when their shot isn't falling — viz. Kawhi Leonard's 10 boards last night, or Manu's 6 boards and 11 assists. And I'm not talking about just the last couple games; the two-three-four-game disappearing acts have been a worrisome trademark of Klay all season. The defense and shooting stroke is always there, but if he wants to live up to the growing hype (Warrior pundit Feltbot calls him a sure-fire all-star; Bill Simmons recently tabbed him as potentially the best young SG in the league after Harden) he has to find more ways to avoid curling up in a fetal position when his picture-perfect shot isn't splashing. A step in the right direction would be studying how to draw contact and get himself to the FT line. (A bit more on his shortcomings in that regard in just a sec).

I told a poster here I'd stuff this diary full o' numbers; got a bunch in, but here are a few more for good measure:

Harrison Barnes' PPG and RPG in 38.4 mpg in this year's playoffs. Edit: first rookie to average 16/6 in 10 or more playoff games since David Robinson (thanks, starbury_to_s-jaxci2000). On a fairly respectable .544 true shooting %. At 20 years old. I don't want to reignite the old Barnes v. Klay debate, mostly because they're not zero sum — you get two starting wings, and their skills seem beautifully complementary. Their cheap rookie scale contracts fit nicely, too ($6.2M combined next season, escalating to a whopping $10M in 2015/16). But I think even the most ardent Klay supporters and Barnes doubters would allow that of the two, Barnes showed far more consistency, poise, and "presence" in this year's playoffs. On a semi-related note: the look of sheer terror in the faces of Oracle fans while Barnes was lying in a heap on the court reminded me that I am not the only person in Warriors Nation who is unhealthily emotionally attached to Harrison Barnes. I'm not a religious guy, but I think I may have quietly muttered a secular prayer.

Bogut's playoff rebounds per 36 minutes. Unfortunately, due to injury and/or foul trouble, he was only able to muster 27.3 minutes per game. If he can get his ankle right in the offseason and give us consistent starter's minutes throughout next season (both somewhat big ifs; see the Monk's post in this thread), the ceiling for this team is high indeed. Dude is only 28, even if his ankles, under the weight of 280 lbs.' worth of constant pounding, must feel significantly older than that. If he gave the 37 year-old Duncan so much trouble in the Spurs series, imagine what he'll do next season (if healthier) to the 38 year-old Duncan? And of course it's not just about age: in the first round, he absolutely owned the Nuggets' big, young, athletic, and putatively fearsome tandem of Koufos and McGee. His career RAPM numbers suggested he was one of the five or six most dominant defensive players in the league when healthy; in the playoffs we finally saw flashes of that dominance.

Curry's playoff assists per game. Let's put those silly notions that he's just a shooter and not a "true PG" to rest, shall we? And while we're at it, the whole term "true PG," and the crusty old NBA saw that you need a 9+ apg, pass-first little guy running your offense to succeed in the NBA? The last 22 NBA champions say hello. If the Bulls can win championships with Kerr at PG, or the Lakers with Fisher, or the Pistons with Billups, or the Heat with Chalmers, etc., I suspect we're not being held back by the fact that our point guard has the side benefit of being the best shooter in NBA history.

David Lee's points, rebounds, assists, and steals per 36 minutes in this years playoffs, despite playing more than half of his minutes on a shredded hip flexor. The embodiment of the term "Warrior."

Klay Thompson's playoff free throw attempts per game. Not sweet. We're talking 6 free throw attempts in 495 minutes — two more than Kent Bazemore attempted in 16 minutes. As a result, despite his dead-eye from 3, he finished the playoffs with a rather desultory 13.2 ppg on .515 true shooting. Not what you want from your team's ostensible second scoring option, especially when option #1 is limping into double and triple teams. As I noted yesterday, Klay's homework for the Summer is to watch tape of James Harden, Kevin Martin, Dwyane Wade, Kobe Bryant et al. I don't expect him get to 8-9 FT attempts per game, but damn, even 3 or 4 would be a huge boon to his overall game (he's currently at 2.0 fta per game, career, with no improvement from year to year two). Absent that, talk of his ever being an all-star, or the second-best young SG not named Harden, seems distinctly pipe-dreamish to me.

Ugh, I said I had gotten the "Arghh" out of the way, and here I am carping. Arghh. Sorry, Klay. The Ws wouldn't have made it this far without you; and wouldn't have made this series so interesting without your amazing performance in Game 2. You're only 23 and your future is still incredibly bright. Now, get to those tapes.

Moving on, here's my Warrior Wonder for today: 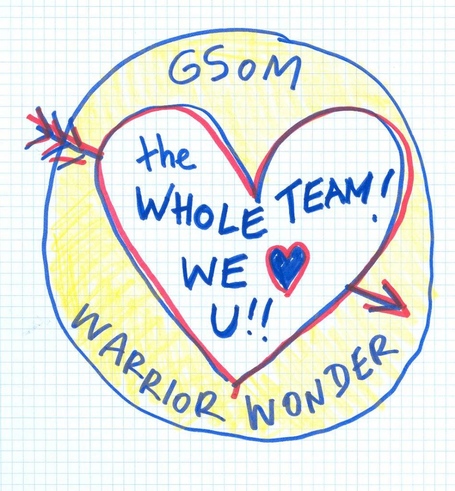 Of course, the "U" in this big sloppy valentine includes not just all the players but also Mark Jackson, Mike Malone, Bob Myers, Jerry West, Joe Lacob, et al. Thank you all so much. This Warriors season, and these past few weeks in particular, remind us all why we follow sports. You have a pretty good idea what you're going to get when you watch a great movie or TV show; in sports, you never know when something like this postseason is going to sneak up on you. Totally unexpected, totally wondrous.

Dammit, I'm feeling so sappy today, I'm going to throw out the requisite "sports team as girl" metaphor (obviously, feel free to replace "girl" with "boy" as you see fit). This year's Warriors were the girl who showed up that one summer, after years of ignoring you, and completely rocked your world. Like, non-stop passion and ecstasy and dropping of the word "love." You guys have to part ways for a little while — that's the playoff elimination part of the analogy. But the great thing about this one is that unlike that brief fling in 2007, she seems like a keeper: you actually dig spending time and talking with her, and she with you, and you guys have already discussed commitment and marriage in a semi-serious way, and you feel like the chances are pretty good that the relationship is only going to grow more awesome over the next 3-4 years. After that ... well, you know, marriage, kids, a mortgage, a job with a boss you hate, etc. But at least for the next few years, all seems right with the world.

I mean, so long as this girl's ankles hold up.