Here's some good news after last night's loss: Stephen Curry is very good at basketball and Sports Illustrated is giving him the attention he deserves on its regional cover this week. 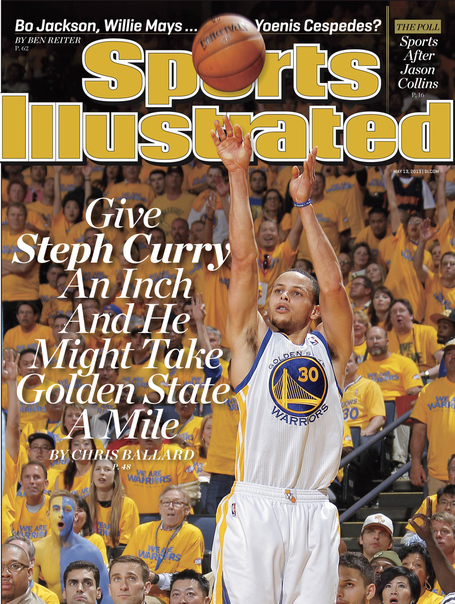 I think we've gotten past the point where we can say that Stephen Curry doesn't get the attention he deserves.

Curry's first appearance on a Sports Illustrated cover certainly qualifies as major national attention even for those who just want to play the victim because it feels so familiar as a Golden State Warriors fan.

An excerpt from the SI release promoting Chris Ballard's article:

During the Warriors six-game first-round victory over the Nuggets, Ballard says that Curry "appeared to be engaged in one very long, extremely thorough heat check." (Page 52)

Ballard writes that Curry is a different breed who not only creates his own space, "but he also thrives in the absence of it." Along with some nudging from his sharp shooting father Dell and coach Mark Jackson, Curry has adapted to defenders playing him tight by shooting more quickly and from more difficult angels. This has led to Curry scoring 59.1% of his buckets unassisted this season. For comparison's sake, Kevin Durant, another space creating shooter, was assisted on over half of his shots.

Sure, there's that whole All-Star thing from months ago, but I'll take him shooting the Warriors to the second round of the playoffs over a spot in that glorified street ball game. And it can definitely be a bit aggravating when people act like the shooting display he has put on in the 2013 NBA Playoffs is stunning when it's really just the extension, or maybe a climax, of what he's proven to be capable of when healthy consistently - he's been throwing the ball in the basket all season. This extended heat check has certainly been ridiculous, as Jarrett Jack is quoted as saying in Ballard's article, but it's also not exactly some random dude coming out of nowhere when his team got desperate after losing their first All-Star in forever in the first game of the playoffs.

But this explosion of national attention is also a good time to pause and note what Tom Ziller of SB Nation pointed out this morning: the Warriors totally won the Stephen Curry contract negotiations by signing him under the max and avoiding a messy restricted free agency process.

The days of being a self-pitying Warriors fan look to be coming to an end, which is probably worthy of celebration in its own right regardless of however this playoff run ends.