NBA Playoffs 2013: Putting the Warriors' fourth quarter collapse against the Spurs in perspective

The Warriors blew a 16-point lead in Game 1 against the Spurs last night that was excruciating to watch. But how do we explain it and what does it say about this team?

Share All sharing options for: NBA Playoffs 2013: Putting the Warriors' fourth quarter collapse against the Spurs in perspective

Bears repeating: teams leading by 16 points with four minutes or less remaining in a playoff game were 392-0 ... Until last night.

There's something that we probably need to acknowledge before digging deeper into the Golden State Warriors' double overtime loss to the San Antonio Spurs last night: they always play high-risk basketball.

They're a jump shooting team that has a bit of a turnover problem at a high pace. It's what got them here and we can't expect it to change now.

As we've seen this season (and in the playoffs), when they're hot they can do magical things, even without David Lee who is a major pick-and-pop weapon for them. But when they go cold, it can get frigid. And so when I first glanced at the numbers for the game and splits for the first through third quarters compared to the fourth and overtimes, that's the first thing I was curious about.

Was this simply the type of cold spell that jump shooting teams can run into?

There are two ways of look at that: the numbers and then the type of shots they took.

Let's begin with the numbers because they tell a pretty clear story:

We could dig more deeply into those segments (or maybe even debate whether the first overtime - during which the Warriors played relatively well - even belongs here but what should leap out is that there was a huge swing in scoring efficiency, particularly for the Warriors. Put another way: for whatever else happened, had the Warriors just not seen such a massive drop in scoring efficiency things might have turned out differently (and not even gone to overtime to begin with).

I'd be remiss if I didn't also look at free throw shooting: veterans Richard Jefferson and Carl Landry going 0-for-4 from the line in the fourth quarter did not help the team's cause. They went cold from the field, got to the line, and blew a few opportunities there. So that combination has to be taken into account.

But the next question might be why did they shoot so much more poorly? People are tossing out a lot of explanations and blame for that, but I'm going to suggest something that sounds rather inane and oversimplified: they just stopped making shots.

And the shot charts really sort of illustrate that: they weren't taking substantially different shots, but they weren't making the ones they made previously. 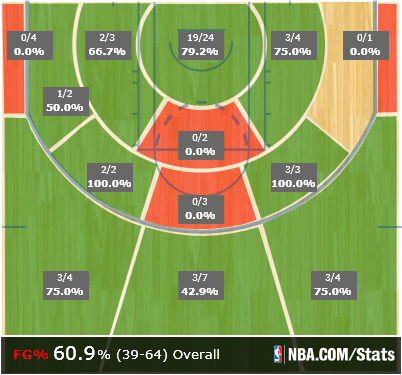 Warriors shot chart from periods 1-3 in Game 1 at San Antonio. 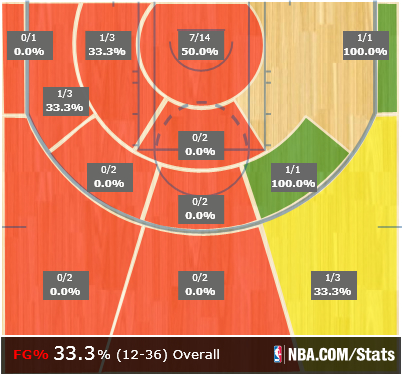 Warriors shot chart in periods 4-6 in Game 1 at San Antonio.

What stood out to me was that if you break that shot chart down by distance, the distribution of shots was actually very similar except for one big difference:

Percentage of shots by zones.

They shot less threes and more long twos in the latter three periods. Everything else was similar. So that leads to another question:

Why did the Warriors' shot distribution change?

First, the number of those long twos taken by veteran Jarrett Jack is also interesting. In those first three quarters played 20 minutes and took one jumper in that long two range (and actually only one other shot outside of the paint) and missed; in the final 22 minutes of the game, Jack played 22 minutes and went 1-for-4 from that same range of shots. And if we expand the scope, another way of highlighting the same thing is saying that Jack's usage rate went from 15% in the quarters 1-3 to 27.74% from the fourth through the second overtime.

Jack was the first thing mentioned in the vent thread last night so I won't belabor the point: it was frustrating to watch so many contested long twos, even though he's actually shot relatively well from that range throughout the season.

How big was fatigue for Curry?

Curry's fatigue was absolutely a factor in what happened: going 0-for-4 from three while going 5-for-9 from the rest is easily explained by a player losing their legs, as Curry suggested post game.

But as Spurs coach Gregg Poppovich alluded to, it's not clear to me the Spurs were doing anything differently to him, even though we fixate on all the threes: Curry shot 6 of the team's 10 long twos in the first three periods and made four. When you're shooting 4-for-6 from that range, everything is gravy. He went 0-for-2 in the final three periods. Again, that's explained by a combination of fatigue and a few less pick and roll opportunities with Andrew Bogut for what it's worth.

There's little doubt that the coaching staff should've found some time for Curry to get a breather, whether it was when the Warriors got up by 16 in the fourth quarter or for longer stretches in the first three.

But what's almost more interesting about that shot chart for the latter part of the game is what's missing.

How significant was Klay Thompson's absence after fouling out?

In the first three quarters, Thompson scored 19 points on 8-for-14 shooting; in the final three periods, he had one shot in just 3:40 before fouling out in the fourth.

Setting aside any quibbles with officiating, taking away a jump shooter from a jump shooting team was huge but not simply because Thompson wasn't the one hitting all those long twos in the first three periods - he only shot two.

Given that I already highlighted the increase in long twos and free throw rate, it might seem weird to simultaneously focus on the significance of a player who didn't shoot that many long twos and whose free throw production they "replaced". But two other things are worth keeping in mind:

It's almost impossible to talk about this collapse without talking about Thompson leaving the game: when Curry stopped hitting and Thompson was off the floor, the jump shooting team re-distributed those jump shots. And that fits with a narrative that Cameron Archer of SB Nation's Pounding the Rock laid out for us prior to the series: Thompson's shooting is significant to the Warriors' success. There are contextual factors that might explain that, but losing him really hurt last night.

Putting the loss in perspective

Last night I was writing from my gut when I said this loss wasn't worth panicking over and might in fact even be encouraging in that the Warriors were right with the Spurs through two overtimes. After stepping back from it, attempting sleep, rewatching and looking at the numbers, I'm even more firm in that position.

We can't get ecstatic about our jump shooting team when they light up the Denver Nuggets for surreal shooting in the first round and then pretend like it's the end of the world when suddenly those jump shots aren't falling: the way the Warriors play is to live and die by jumpers. The style of play is what got them this far. They're not going to change that. When everything is clicking, it's a beautiful thing to watch. It's their biggest weakness and greatest strength. When those shots are threes, this offense can be stunningly efficient. Contested long twos off the dribble without making a pass? Not so much.

But last night, that wasn't necessarily the Spurs defense: they didn't do a whole lot to stop Curry's ridiculous jumpers in the first three quarters; they stopped falling in the latter three periods. If Thompson didn't foul out, I'm confident they would've been a few more percentage points better in that scoring efficiency category, gotten a few stops, and won that game.

The key takeaway from all of this is that the Warriors didn't suddenly meltdown and just start playing a different style of ball: given that Green and Thompson fouled out and Bogut's minutes were limited, there were things on both ends of the ball they simply couldn't do with the remaining personnel. That's not simply a matter of "making adjustments" or "bad coaching", though mistakes were made - those losses were fatal blows to a team playing on the road against a championship contender.

We just have to prepare ourselves for games like this one and move on.

I'll be the first to panic when panic is warranted, but panicking at every loss will just drive you insane. Last night was brutal to watch, was a major missed opportunity, and of course there will be some anxiety about how this young team with vets missing free throws will respond in Game Two. But we can also probably be encouraged by the fact that they played an elite opponent that close given the circumstances.

The best way to look at this: even if Tim Duncan and Tiago Splitter are healthy for the remainder of the series, enough went right in Game One to give us some hope that the Warriors will be able to put themselves in position to win again and maybe even take it the next time.