Warriors even series, steal back Game 1

Share All sharing options for: Warriors even series, steal back Game 1

This was an exact mirror image from Game 1 where the Golden State Warriors started hot, went cold and watched their potential victory escape their grasp in terrible, excruciating fashion. Stephen Curry looked tired again and Tony Parker was driving at will. With Danny Green and Gary Neal making a couple threes, we could almost taste the tears dribbling down our chins. Down 0-2 going home to Oracle, perhaps the Warriors will play out of their minds for one game—conjure up images of Baron Davis dunking on Andrei Kirilenko—and then we'll quietly slink away as the big boys finally come to play.

Wait, scratch that entire paragraph. With seven minutes left in the fourth quarter, Parker led a transition break with Duncan setting the pick at the free-throw line-extended; Parker snuck behind it, waited for Bogut to not close out, and nailed a jumper bringing the Spurs to within six points. That was it, right? It was all over.

So of course the biggest shot of the night—amidst about 100—went to Green nailing a three after a Jarrett Jack (!!) drive-and-kick.

It's been an odd up-and-down roller-coaster ride cheering for these Warriors in the playoffs. One minute they're supposed to cave under the pressure, as they did against Andre Miller, then they exhibit a never-before-seen mental toughness to come back from the David Lee injury in the next game. And when they choked under pressure in Game 1 at San Antonio, the Warriors were supposed to lay down, unable to push past the fact they let the Spurs "out-experience" them. Wrong again. Wrong at every single turn, every single shot.

The Warriors found unsung role players to step up, reached deep within themselves, blah blah blah. They outplayed San Antonio in Game 1 and did it again in Game 2 for nearly three quarters. In eight 12-minute sequences in this series, the Warriors have out-executed and out-defended the Spurs nearly six times. 30-game losing streak? This is how the Warriors have played all season: right through the Bogut injuries, Curry ankle tweaks, three rookies in a playoff rotation and now collapsing defeats. I know I shouldn't be surprised by this team's propensity to bounce back but I'd be lying if I said I expected this.

When Thompson frequents this spot on the Golden State of Mind, one immediately thinks about the unconscious shooting, more shooting and even the occasional athletic finishes like the dunk tonight. Thompson did shoot well, making 8/9 threes and not just the standard wide-open corner three kind (looking at you, Shane Battier) but transition pullups, off-screen heaves and the standard off an offensive rebound with 20 seconds left on the shot clock attempt. But the most striking aspect of his game is the leaps and bounds he's made on defense.

On a transition opportunity for Parker, Thompson stayed in front on him, kept his feet down when Parker tried his Eurostep-flop-thingy, and blocked his floater. Locked down. It doesn't matter who Mark Jackson wants Thompson to guard; Ty Lawson, Andre Miler, Tony Parker and Manu Ginobili have been relatively quiet trying to play through the now two-way specialist. Harrison Barnes and Green may have more athletic defensive potential but Thompson is this team's defensive stopper. How's that for mental toughness?

1. The Warriors appeared to outplay the Spurs through the entire game, sans the one stretch in the third quarter, but in actuality, the Spurs missed a ton of wide-open shots, shooting 5-21 from distance. These weren't contested threes either, when do the Spurs do that? Green, Leonard and Ginobili combined to shoot 3-15, and most of them were open, with scrambling closeouts by Thompson and Curry not making much of a difference. Don't look for the Spurs to shoot the same way in Game 3.

2. But don't look for Curry to struggle shooting the ball in Game 3, either. He was flummoxed all night long with Green essentially picking him up at halfcourt and requiring very little double teams. The Spurs are old, we get that, but Curry has logged nearly 110 minutes in the past 72 hours. With one off-day, expect to see Curry find enough adrenaline, especially with the crowd, to throw out another now-vintage Curry performance.

3. Mark Jackson did everything but take his suit off, strap on some Air Forces and post up Parker himself. That's how badly he wanted the Warriors to start the offense. They repeatedly went to post-ups, mostly from Barnes and Thompson but I don't think Jackson would've minded if it was Andris Biedrins starting it—maybe not. It goes away from the spacing the Warriors like to get from penetration but Bogut and Green are excellent interior passers and the Warriors can get away with this when Thompson and Curry are spotting up behind the arc. On several occasions, the Spurs doubled the post-move but Barnes found the slashing Green for a layup right at the rim. It also helps that Duncan can't play 40 minutes anymore. When he is on the bench, the Warriors can attack the rim relentlessly, setting up open jumpers for anymore, hence sustainable shooting.

4. Behind the Curry and Thompson nova-shooting lies the steady defense of Green and Bogut; combined, they form an excellent interior wall and "annoying" exterior peskiness. Not once did Duncan get a clean look at the basket with Bogut in. Granted, he made his fair share, and all great ones do, but he worked for each and every one of them. And at his age, those spins and hits through the lane start to add up in a playoff game. Green is the epitome of an annoying defender and I mean that in the best possible way. He's someone the Warriors have lacked for a long time. Brandon Rush and Thompson are potential lockdown defenders but they don't rebound, elbow, kick and take charges the way Green does. The more I think about it, the more Green is the mirror image of Bogut, but on the perimeter. 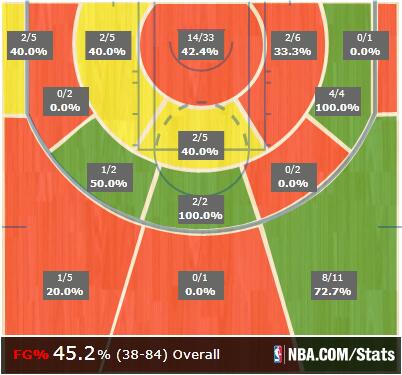 Jarrett Jack gets a lot of grief, especially from me and everyone's Twitter timeline, but when his shots go in, he's as great as he was in the first half of the regular season. Jack nailed a couple isolation jumpers in the fourth quarter—with Curry barely able to stand in the corner—but the biggest play he made was at the end of the third. Jack dribbled out the shot clock, as usual, drove into a double on the left baseline but stopped long enough to find a wide-open Thompson in the corner for a three: swish. One can't really stop the momentum of a veteran team like the Spurs with a single shot but it injected some much-needed confidence for the young Warriors.