Coming into the season as a somewhat boring acquisition but obvious insurance backup, Jarrett Jack was much more than that. He was the team's best player in games they needed him most, especially in the regular season.

GM Bob Myers acquired Jarrett Jack in a three-way trade with the New Orleans Hornets and Philadelphia 76ers on July 11, 2012. With the draft pick of Harrison Barnes and Brandon Rush coming off a breakout season, the Golden State Warriors needed to find more depth in the backcourt and picked up the veteran point guard with one year left on his contract. Little did we know how this small offseason ripple would conversely affect the season and spark so many controversial threads.

By now, the statistics are about as talked about on these threads as Kate Upton's pictures are on Twitter. There are win shares (career-high 5.6), PER (15.93, third-highest of career despite playing more minutes in this season), second-highest assist percentage of his career and countless clutch shots when the team's offense bogged down. But perhaps the most striking number was 1023; the total number of points he scored in the regular season. That and his unwavering confidence in the face of adversity became a calling card for the Warriors as a team. It's fitting that we start this summer's player evaluations with not the best player on the team, but the player that exemplified the Warriors' mental toughness.

When the Warriors first picked him up: most, including myself, expected a steady backup point guard able to hit a jump shot and run the offense but concede most of the looks to Klay Thompson and a burgeoning wing combo in Rush and Barnes. Alas, Jack turned out to be much more.

There wasn't a better two-game sample size that personified his toughness than the two midseason tilts against the Toronto Raptors: a game where Andrew Bogut came back, unexpectedly, from his ankle injury, the recurring problems of the Curry ankle, a leaky defense that plagued slow starts and Jack's confidence to take shots when no one else would.

Despite Bogut's return on January 28, 2013, the Warriors weren't able to put the Raptors away because of Aaron Gray's spectacular scoring ability, Jack exhibited his versatility in handling the ball and scoring when Curry left the game with an ankle sprain. Jack missed some forced shots, as he is wont to do, in going 4-10 from the field, but scored back-to-back buckets in the fourth quarter to give the Warriors the lead.

The Warriors didn't turn around their season or find a turning point then because arbitrary endpoints don't define a season, but that game foreshadowed the amount of resiliency—no matter how cliche the word is—Jack's impact had on this team. One player came back, one went down, and others would step up without bemoaning the bad luck set upon them.

In the second game against the Toronto Raptors, the Warriors played the kind of defense that plagued them in the second half as their top-ten efficiency sunk back to the pack, where their talents most closely resembled. Near the end of the first quarter, the Warriors were floating and playing lackluster basketball against a team starting Andrea Bargnani and Rudy Gay. After a fastbreak layup, Jarrett Jack exhorted his team, yelling at them, though inaudibly so it's conjecture here, to give a better effort than they had been. Though the Warriors barely held on for a seven-point win, that moment gave more clarity into who the on-court vocal leader was.

Curry's threes, passes and flashy finishes are the best parts of the team and he is the unquestioned leader on a team full of young players. But Jack's steady presence guided this team to many wins that didn't seem possible; like the 30 point, 11 assist performance against the San Antonio Spurs.

Without heaping too much praise onto a single player, the interchangeable pieces of a team aren't rendered as expendable as the Warriors made it seem. The Mark Jackson "No Excuses" mantra seemed coach-speak heavy and eye-roll worthy but nobody pushed that phrase more than Jack. He didn't allow doubt to seep into the play of his teammates. When Bogut went down, Festus Ezeli stepped up to play capable minutes. When Curry went down, Jack himself ably handled the extra scoring responsibilities, even playing the point position more to take pressure off the ankle—an underrated reason as to why Curry was able to average a career-high minutes and only three games.

But with those qualities comes the bad, most notably, by everyone that had watched every dribble he'd taken in the regular season; was the shot selection. Jack spent most of his time living in the long-two range and clogging up offensive possessions by either refusing to pass or unable to see the open man and blindly driving around before taking a wild shot or turning it over. Granted, long twos can win, just ask LeBron James. But his infatuation with forcing his shot, or Mark Jackson's infatuation with playing him at the point guard position for extended periods of time bogged the offense down to a crawl. 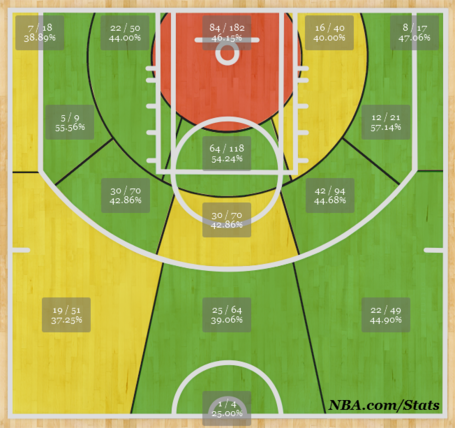 Jack remained an enigma all season in that we all love his play when the shot is going, the floater is falling, the confidence exuding levels of Don Draper, but when that ceased to exist, as it did as often as it didn't, fans decried his lack of passing ability and questionable shot selection as something that sunk the team in losses. In truth, his attitude and playing style didn't change any, if at all. Jack is who he is, especially at age 29 going into 30 next season, he looks for his own shot, plays with a Kobe Bryant-esque confidence in that he wants to take control of the game in his own hands.

So often, we play pickup basketball and we aren't as engaged unless we get a couple shots up, especially when playing with strangers. Their skillset is unknown so there's more of an inclination to do what you can to win the game. Jack is the guy with the ball and more often than not, he won't pass you the ball because he knows, or he truly believes he can take the opposing team by his lonesome. It's perhaps not preposterous to suggest that it's a product of how he was raised as a basketball player, jumping from high school to high school, and having to make a name for himself in Chicago before having to go through the same thing at the NBA level. And the pickup-style mindset works for Jack, whereas if Curry played the same way, he'd be half the player he is now.

This isn't to say that there was bad chemistry on offense but that's how Jack works and it's magnificent when the shot is falling and predictably frustrating when he isn't. For a player that doesn't necessarily score at a consistent rate, he's as consistently predictable as a player can be. And that's more of a plus than a minus. It's understandable that us, especially bloggers and writers want players to play the way we believe they should play, holding some platonic ideal in which second-guessing, first-guessing and downright guessing isn't as insane as condemning LeBron James' audacity to have one bad game in the Finals.

With the cap room the way it is for the Warriors, they'll most likely keep either Jack or Carl Landry, with a chance of missing out on both. With the way he's played this season and what he means to this team, it's feasible those feast-or-famine traits will roam Oracle Arena again. And blogger hatred be damned, he's been a fine player all year long; and if that was his only season as a Warrior, it certainly won't be forgotten.