Golden State of Mind + Beyond the Box provides the ultimate 2013 NBA Draft viewing experience. Also, a look back at some entertaining Golden State Warriors draft history in preparation for tomorrow's big event with the 3 screen trifecta- NBA Draft on ESPN, GSOM, and Beyond the Box.

I'm admittedly late to the pre-2013 NBA Draft Day hype this season. It's funny what a WE ARE WARRIORS playoff run and no first or second round draft picks will do to you.

At Golden State of Mind the days leading up to the NBA Draft are usually like a count down to Xmas Day. Sadly during most of the Cohan-era, Warriors fans were tormented with some Draft Day disasters. It was like waking up early on Christmas Day to open a shiny wrapped present with a stylish ribbon only to find a lump of coal.

I know the 2013 NBA Draft is unlikely to impact the Warriors in the short term, but as hoops junkies and Warriors fans (always holding out for something shocking) I know a ton of us will still be watching closely tomorrow.

Beyond the Box = 3rd Screen

For the previous 8 NBA Drafts, I've used both a 1st and 2nd screen. This year though I'll have a 3rd screen that I've been building with some of my basketball buddies called Beyond the Box on my iPad. 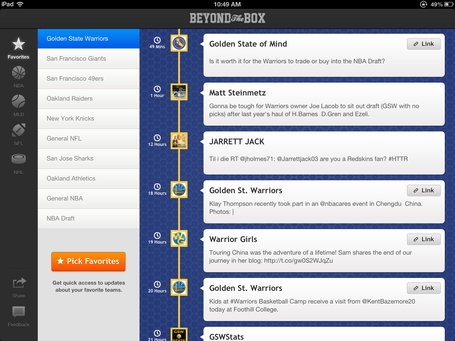 Golden State Warriors timeline on Beyond the Box is "UNSTOPPABLE BABY!"

In addition to participating in the open thread for tomorrow's Draft, break out your iPad, download Beyond the Box, and check out the Warriors and NBA Draft timelines on Beyond the Box. It would be fantastic to get your feedback and requests through the app. We want to make sure it's performing at All-Star Super Star Hall of Famer level by the time the 2013-2014 NBA season begins.

Download Beyond the Box for iPad on App Store

Don't have an iPad? No problem just sign up for iPhone and Android Beyond the Box launches below:

More info about Beyond the Box:

Connect with Beyond the Box: 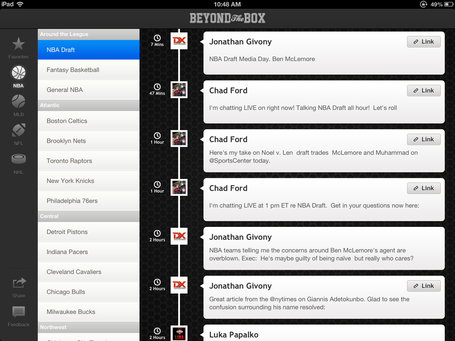 Real-time updates from the best sources about 2013 NBA Draft.
Links