To help figure out what Toney Douglas and Jermaine O'Neal might offer the Warriors, I asked fellow SB Nation bloggers for insight.

In what will likely be the final significant signings of this offseason, the Golden State Warriors reportedly agreed to terms with reserves Toney Douglas and Jermaine O'Neal yesterday.

While we can probably glean what they might contribute to the Warriors based on their statistics, it's always nice to have the perspective of the fans that watched them closely and with similar levels of interest as we probably will this season.

So before writing about the signings myself, I contacted three SB Nation bloggers about to give us insight about these players:

In short, it looks like the Warriors got the best defenders from the Kings and Suns, for whatever that's worth.

GSoM: Though Douglas is known as a defender, at 6'2" some people might be concerned about potential size limitations. Has he struggled defending bigger guys? What situations does he excel in based on what you've seen?

Jordan Foley, The Dream Shake: His size limitations didn't show up as much to me when he guarded point guards so much as when he had to play with another natural point guard and gets slid to the 2. He got SG duties defensively in a lot of scenarios and he would definitely get burned by guys who were just physically more well-equipped. But Douglas plays a little bigger than he is when defending on the perimeter - he moves his feet pretty well and uses what size he does have pretty well. Active hands too. Some of that can counter-act size, but sometimes he gambles too much going for steals in passing lanes.

That said, the guy will give you defensive intensity - he has the confidence to pick someone up for 94 feet without getting burned and can disrupt offensive possessions in a lot of ways that will make you love him for stretches. Those stretches rarely last the whole quarter, but he's still an above average perimeter defender. Overall basketball IQ on rotations its a slightly different story, but if you put NBA point guards not named Russell Westbrook/Chris Paul/Derrick Rose/Deron Williams in front of him on the perimeter he will be able to hold his own coming off the bench.

Tom Ziller, Sactown Royalty: Douglas was clearly one of the Kings' best defenders when he arrived in February. The Kings finished No. 29 in defense. TD's defense was noticeably better than most of the rest of the team (Tyreke Evans and often James Johnson excepted). But my judgment of defense is skewed as I have watched nothing but bad defense from the Purple and Black for years.

More on the trade that sent Douglas to Sacramento: The Dream Shake storystream on the deal Sactown wasn't happy SBN summary

GSoM: Having lost Jarrett Jack, some people are wondering how well Douglas could play next to Stephen Curry. Given what you know about Douglas' game, how well do you think that would work?

TZ: Curry can do everything, so the question will be whether Douglas can defend two-guards. At his size, I'm skeptical. He defended point guards pretty exclusively in Sacramento. But with a rim defender in Bogut and an agile wing in Iguodala, that might not matter nearly as much. I'd consider Douglas a downgrade from Jack overall.
JF: I did not get to watch a ton of Golden State games so I am not totally familiar with the backcourt dynamic but my impression was that Jack routinely handled pg duties to allow Steph to play off the ball.

When Douglas is in the game, I'm not sure this will be an option. He is an ok ball handler but he is not a guy you can rely on to keep his dribble alive through drives and distribute the ball nearly as well as Jack did. A lot of players are worse than Jack in this regard, but Douglas moreso than others. Curry may need to dominate the ball more (for better or for worse) when Douglas is on the floor with him.

Douglas does have the ability to stretch the floor a bit more than Jack* - though he can be a bit of a chucker at times, he hit some VERY timely 3-point shots at critical points during games.

Outside of 3pt shooting and defensive aggression, he's not much to look at - but he's relatively serviceable despite the disdain you will here from most people about him.
* Editor's note: For their careers (per Basketball-Reference), Douglas and Jack shoot about the same 3-point percentage (35.9% and 35.8%, respectively) but Jack has been a tad bit more inconsistent and has attempted less per 36 minutes (2.7) than Douglas (6.4).

GSoM: Although there are questions about how much O'Neal has left in the tank, last season was arguably his best since his Indiana days. How did the Suns use him and what situations do you think he thrived in?

Dave King: First of all, O'Neal came into camp in great shape and ready to go. The Suns trainers helped keep him going all year, but he got the ball rolling on his own with that blood transfusion thing in Germany. The [27 games] he missed was primarily dealing with a family issue , not an injury. He was healthy for 90+% of the season. Just last month, he tweeted that he did that German thing again so he's ready for next season. 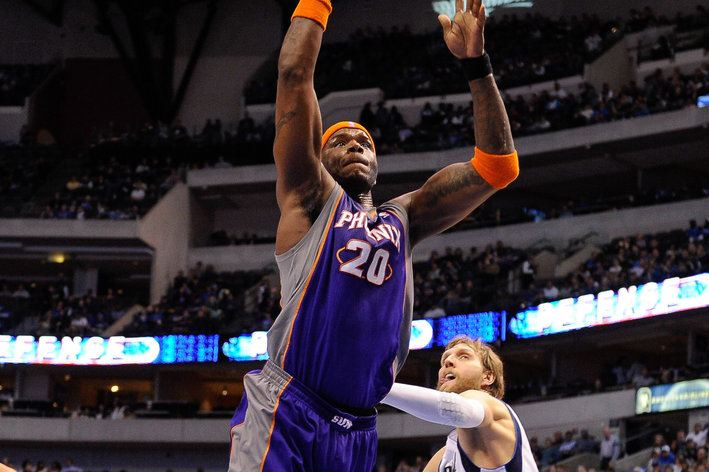 Bright Side of the Sun gave the rejuvenated Jermaine O'Neal an A- for his season, owed in part to the, "German necromancers who resurrected O'Neal's career."

The Suns used O'Neal in a traditional sense. They were a plodding team last year in terms of scheme, so O'Neal was able to jog back down the court each time. Once the team was in a half-court set, O'Neal was in his element and really shined. He can get his own shot in the paint in a multitude of ways, and can defend the paint very well on the other end. The trick is getting him into the paint before the play's already over.

I am guessing O'Neal will be as effective as Bogut defensively, but on a lot fewer minutes. While he can play 30+ minutes on occasion, you can't expect that over any length of time - he occasionally needs a day off to rest his body.

GSoM: According to RAPM numbers through March of this past season, O'Neal was actually a plus on defense. We can look at the Synergy numbers to see what he was most efficient at, but from your observation what makes him an effective defender even as he's aging?

DK: O'Neal knows how to use his length and employs a good economy of motion. By staying calm and reacting to the action, O'Neal gets into position very well on defense to contest any shot and often get the block or the rebound. O'Neal is not a foul machine, though he's not afraid to use his body to make a statement to a driving defender. O'Neal can be a hothead, proven out by nearly leading the league in technical fouls despite playing limited minutes.

Remember that you're asking a Suns fan this, so it's all relative, but I'll say that O'Neal was the Suns best interior defender last season. On limited minutes.

To discuss the latest about the Warriors free agent deals, head over to today's free agency open thread.