To say that Draymond Green struggled with his shooting during his rookie season is an understatement, but if any one player represents the organization's newfound emphasis on defense and high basketball IQ he's it. Reaching back to last year's summer league, we look at Green's season and the attributes that make him a promising member of the franchise.

There's little question about why Draymond Green fell to the Golden State Warriors in the second round of the 2012 NBA Draft.

At 6-foot-7 and 235 pounds, the Michigan State Spartans alum had been pigeonholed into the dreaded tweener category as "...some scouts don't think he's big enough to play power forward or agile enough to be a small forward" as described in a Yahoo! Sports article last May.

The key to the college graduate - increasingly a rarity among elite NBA rookies - making a contribution in the league in the minds of many Warriors fans would be his ability to shoot the three, something that he proved he could do in college albeit not at a particularly prolific rate.

And early on in his rookie season, the outlook was bleak.

Green began his rookie season shooting 0-for-9 in limited minutes heading into a home game against the Atlanta Hawks on November 14, which wasn't promising but possibly - if we were being optimistic - as much the result of not getting a chance to find a rhythm while playing in short spurts. Yet although it took him a while to finally break through, Green managed to make his first made field goal in the NBA among his more memorable moments of the season.

With 8:29 left in the second quarter, Green came off a double screen set by Andris Biedrins and Richard Jefferson to hit a wide-open three off a crosscourt pass from Jarrett Jack. It was by no means the type of spectacular play that you'd immediately imagine as the type to elicit trash talk, but an exuberant Green was called for a technical as he backpedaled to defensive end with a little more bounce in his step.

It was a fitting moment for Green nonetheless and one that still stands out when looking back at this season.

"I thoroughly enjoyed his simultaneous first basket/first technical, just because he was known for shouting like that after made baskets throughout his college career and I can only remember him getting a taunting technical for it once or twice at MSU," Patrick Hayes of BallinInMichigan.com said during a Q&A with GSoM before Green's first NBA game in Michigan. "Overall, I'm just impressed that he's found his way into a regular rotation spot this soon."

However, those early season shooting woes would end up haunting Green for his entire rookie season - despite seemingly finding a rhythm during a five game stretch in mid-November in which he shot 4-for-9 from the 3-point line, his 32.7% field goal percentage was the lowest shooting season of any Warriors player to play 1000+ minutes since the franchise moved to California and the lowest of any active NBA player to play 1000+ minutes, according to Basketball-Reference.

To say it was a poor shooting season would be an understatement, but the fact that he still managed to keep his plus/minus numbers anywhere near break even speaks volumes about everything else he brought to the court from the moment he joined the team.

Even a Michigan fan had to appreciate what Draymond Green brought to the table as a college player.

Although he was never someone you'd consider an "elite" athlete, he always seemed to find some way to have an impact on the game - he was adept at finding an opponent's weaknesses and figuring out some way to exploit whatever disadvantages they had.

"Does everything - everything," former Ohio State big man and Big Ten opponent Jared Sullinger said last year during summer league while playing for the Celtics who drafted him 21st overall in the 2012 NBA Draft. "The guy can pass, he can dribble, he can shoot, team player, always in the right position, great at scouting personnel person when it comes to scouting - he'll call the other team's plays before you call it.

"It's amazing what that guy (does) - he brings everything to the table. I mean, even if he doesn't play this year, he still gives you something else besides just a body. He gives you scouting reports, he talks on defense, he talks while he's on the bench, he's a second coach. I mean, he does a lot of things for the team."

Green's big moments in the playoffs 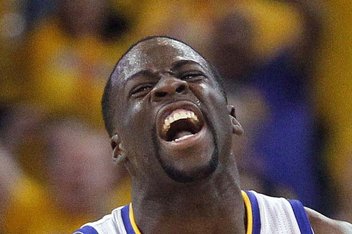 Green was the goat of Game 1 of the first round of the playoffs, but he would later show why Mark Jackson has so much confidence in him.

Summer league might not mean much, but his performance in Las Vegas last summer was pretty much an extension of what we might have expected from him based on his four years in college, although his numbers weren't all that promising. Green seemed to be a magnet for fouls early on, struggled to find ways to score consistently, and at times he looked far more like the tweener he was derided for being as a NBA prospect rather than the versatile player that he was lauded for being in the NCAA.

Yet even as he struggled, he oddly managed to stand out as one of the sharper basketball minds on the floor.

"One thing about Draymond, he's not one-dimensional," former Warrior Charles Jenkins said last July after the Warriors' final summer league game. "If he's not getting it going offensively - just like yesterday, he didn't make [many] shots, he got it on the defensive end. He took charges, he boxed out, he got rebounds and he made key plays to help us win yesterday."

Among the things that stood out most about Green from media row - near the top of the bowl in the sparsely populated Cox Pavilion on that final day - was that you could hear Green loudly directing his teammates on defense and taking on a leadership role that doesn't merely come from being a four-year college player. That disposition on the floor was something that clearly came not only from a comfort with the game and who he is within it, but a heightened awareness of what was going on and the ability to anticipate things happening before they occurred.

"I'm a vocal guy - that's part of my game so I always try to make sure that's something that I'm doing," Green said after the Warriors' final summer league game last year. "It gives other guys a comfort blanket as well if they know they've got a guy behind them talking, so I think that's part of my job."

Michigan State coach Tom Izzo also called Green a "tweener" before the 2012 NBA Draft: "He's between a Battier and a Haslem," Izzo was quoted as saying in an article by Graham Crouch last year. He is the type of player that successful basketball teams generally like to have around. For whatever physical limitations he has, his intelligence - embodied not only in the way he sees the game but how he influences others - makes him a great teammate.

And that seemingly made him a great fit for a beleaguered franchise like the Golden State Warriors.

It's worth noting that Draymond Green's shooting woes were not for lack of effort, even if that would be a reasonable assumption to make anyway.

As everyone else was leaving the court during the practice I visited back in October, Green spent some extra time shooting threes. He was making a fair number, which led to Jackson reaching back to his playing days to talk a little trash with Green.

"Ay Dray, you weren't hittin' all those threes in summer league!"

No stranger to a little trash talk, Green laughed off Jackson's remark and just kept on firing away - it was the most he could do as an injured observer.

During those early practices, Green had to sit out but could be seen constantly asking questions of coaches, teammates, and pretty much anyone who would listen about what was going on. He was an active participant even as he was physically unable to participate.

"You know, I think one of the positives I have is that a lot of people can't really pick up on things watching – they actually have to be doing it," Green said after that practice back in October. "But I'm actually able to pick up on stuff by watching so that's actually been a plus with me being out.

"I think that's the main thing – just trying to pay attention to the flow of everything, the speed of everything and - you'll never get the speed of everything until you actually get out there doing it - just trying to pay attention to it and asking questions. You know, that's what I'm trying to do as well – you know I'm not a guy who thinks I know it all so I ask questions even if I know I may be right I'm going to confirm that that's what's really going on so I know for sure what I'm doing and where I need to be."

And the work he put in while he couldn't work out eventually paid off.

Ultimately, Green became a reliable part of the Warriors' defensive unit, was tasked with guarding opponents' best players – including LeBron James – on occasion, and after a season of historically poor shooting he managed to come up big for the Warriors in the playoffs.

Green's last made three of the season came with 6:40 left in the fourth quarter of Game Two of the second round of the playoffs against the mighty San Antonio Spurs. Similar to his first three of the season, it was wide open after the defense left him to collapse on Jack who kicked it out after driving into the lane. And after holding his shooting arm up for a while to let his actions do the talking this time around, Green simply turned around and headed back to play defense.

Overall during the playoffs, Green shot 39.1% from the 3-point line on a higher rate of attempts. With the help of his threes falling, Green's true shooting percentage shot up from 40.4% in the regular season to 55.1% during the playoffs. If you're looking for signs of hope for the future, the optimists among us can point to that - Green made strides during the season and has the type of work ethic and basketball intelligence to continue to grow into a "Shane Battier" role. The pessimists might point to sample size, a season of really poor shooting, and the fact that Green could be called upon to step into a bigger role this season

But it's really easy to find the holes in Green's game when looking at his physical limitations or statistics. What apparently made an impression on the Warriors' staff - as described over and over and over again this past season, both by the journalists familiar with him from college and those familiarizing themselves with him as a pro - was that Green has all the intangibles to help a team interested in playing winning basketball. Not only does he have a stronger sense of what it takes to win but he's also humble enough to seek out resources to fill in the gaps. That combination of attributes are what constitute the nature of intelligence.

Draymond Green was hardly perfect this season, but when you look at this roster few players better represent the organization's emphasis on defense and high IQ players.