Winning a summer league championship isn't exactly the stuff dreams are made of, but it actually added meaning to otherwise uninspiring play in Las Vegas.

Share All sharing options for: What a summer league championship is worth to the Golden State Warriors

After leaving the court with trophy in hand and decked out in fresh championship t-shirts, the Golden State Warriors filed into the hallway leading to the locker room cheering, hollering, and laughing as a group in celebration of their 2013 Las Vegas Summer League title.

Head coach Mark Jackson, assistant Pete Myers, former summer league players Harrison Barnes and Klay Thompson, and assistant general manager Kirk Lacob eventually joined them in the lockerroom where they could be heard making one more collective cheer as a larger-than-usual group of media members waited in the hallway to speak with them. Phoenix Suns players congratulated championship game MVP Ian Clark as they had to squeeze by the group of broadcast and print media speaking with him just to leave the arena.

"We came in and the guys, they talked about the winning culture," Clark said when asked about what was said in the locker room. "And they wanted to come in and make sure we do things right: we had our film sessions, our practices, and we wanted to come out here and execute and they take pride in everything."

Of course, it was only a summer league title and anyone struggling to keep things in perspective simply wasn't looking hard enough: one observer in the hallway joked with Warriors summer league coach Darren Erman that he was still dry, free from any signs of the champagne bath that might normally accompany a professional basketball championship. Clark's MVP performance created discussion about whether he'd make a roster after going undrafted in the 2013 NBA Draft.

It's obviously not the scenario anyone dreams of when they're shooting around on the playground growing up, but it wasn't exactly difficult to find a sense of joy among the players and staff, if tempered by an acknowledgement of where it stood on their list of priorities. Draymond Green just sort of grinned and averted his gaze before answering the question of significance, which sort of summed up his thoughts before he uttered a word.

"I mean, it's great you know, especially with this being the first summer league championship but to be able to come out here and win it, it was great," said Green, who finished with 12 points and eight rebounds. "It's not the NBA but it's something that the NBA runs and it's a lot of good talent out here. So looking at our roster from day one, you would have never thought that we were going to be able to come out here and go 7-0 and win a championship, but I love how our dedication – guys getting it done on the defensive end – paid off for us."

That dedication the team demonstrated will neither be honored with a banner at Oracle Arena nor a parade in downtown Oakland. While the tournament format in Las Vegas this summer did add some intensity for the championship game, it obviously lacked the sense of finality that the normal professional championship brings. Ultimately, summer league was either the beginning of the next NBA cycle for those that have been there before or the beginning of a career for the rookies.

And like many beginnings in professional sports, it wasn't exactly smooth.

There were multiple points during the past week when I wondered why I even bothered to make the trip – for those who, like me, believe they'll watch any form of basketball, this summer's experience put that passion to the test. For those that didn't overdose on summer league, the best comparisons I could think of for some of the early games were And1 basketball without the indifference to defense or a D-League game without any structure – it was ugly. At some point, Summer League Delirium set in, at no point worse than when Andy Liu caught me singing the hook for that nauseating "Feel This Moment" song (that really needs to be abolished from all sporting events and associated commercials).

People who had been to more summer leagues than I said it was the worst they had seen in the past few years and there were a lot of reasons for that, including teams sitting multiple starters during the tournament and denying fans the opportunity to see some of the players most likely to end up on NBA rosters (including summer league MVP Jonas Valanciunas). But that only served to highlight why most folks watch summer league to begin with, which sort of runs against my standard basketball sensibilities: summer league is nothing without great individual performances.

We don't really remember how the Warriors performed as a team when Marco Belinelli played but we do remember that exhilarating feeling of watching him light it up from beyond the arc. Just like we remember Anthony Morrow, Anthony Randolph, or even Reggie Williams. As basketball fans, they're exciting players; for fans of a struggling franchise, they gave us something to look forward to. 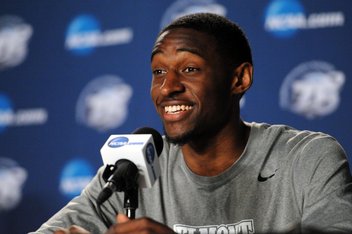 Coming out of college as a shooter, Ian Clark emerged as a key player in Saturday's win as a ball handler when the Warriors need it.

Clark gave us that individual performance that everyone had been waiting for. It came too late to create a buzz that would've made the earlier games less of a struggle to get through, but maybe it did make the entire experience seem less pointless.

By now, you know where Clark's MVP performance stands in the summer league record books: his 33 points were the most of any player in Vegas this summer, his seven threes in a game tied Morrow's record from 2009, his 33 points off the bench were the most of any reserve in Vegas this summer, and of course he helped the Warriors stay undefeated without even really caring much about that.

But more than anything, Clark is the diamond in the rough story most of us want to see emerge from summer league as much as we want to see the big names do big name things. He did something we didn't expect that forced us to take notice of him after everyone ignored him on draft night.

"(Clark) came in with a chip on his shoulder," Green said when asked about Clark's performance. "I watched the games down there in Orlando and he played well down there too. He came here and once he got comfortable he got it going and we were able to find him and get him open shots. But he had a lot of stuff off the dribble, getting into the lane and floaters as well. It just goes to show that it doesn't matter where you play: if you're a good player, you're a good player. You're going to be fine."

And while winning summer league MVP probably wasn't actually Clark's life dream coming to fruition, the outcome probably was exactly what he was hoping for. As a 6-foot-3 guard known for his shooting, Clark wasn't exactly expecting to get drafted. So after the completion of the 2013 NBA Draft, he and his agent laid out a plan to give him maximum exposure by playing for both Golden State and the Miami Heat.

"It was a decision I made on draft day actually," Clark said when asked about the decision not to stick with the Heat in Vegas when I interviewed him about what seemed like an eye-opening performance after the Warriors beat the Lakers on Saturday . "I talked to Miami and they understood. They kind of wanted me to stay, but I already had a commitment to Golden State so I wanted to stick to that."

Obviously, that worked out pretty well for both parties.

While it's possible that he would have done as well with Miami given the continuity with the team, making the tournament run with the Warriors ended up being the perfect stage to show off what he could do. He was able to earn minutes at the point guard spot along with Scott Machado and Kent Bazemore while playing for a team that had to fight to stay undefeated through seven games.

If watching summer league as fans is ultimately about individual feats - even with a format designed to crown a best team - the tournament gave Clark an opportunity to show that he's more than the one-dimensional shooter he was probably pegged as in draft evaluations. He's a competitor and that's all you can ask for.

"He's a good player," Green said when asked about how Clark might fit with the Warriors. "Any good player can fit on a roster. You know, I'm not sure where they stand with that and that's really none of my business but at the end of the day he's a great teammate."

But when we look at the meaning of this whole championship business as fans even acknowledging the reasons why this might have been a down year, the big takeaway really is that the franchise we're rooting for has truly established a winning culture for the first time in forever. They managed to bring in a roster without the NBA experience of some of the competition – the Suns being no exception – and get them to buy in to the system and playing together well enough not to lose. That's a testament to Erman's value as a coach, the scouts for identifying talent, management for pursuing players like Clark, and the leadership on and off the court of returners like Bazemore and Green,

But most of all, it's just another example of the developing organizational culture in which everyone seems to be operating under a common vision whether it's summer league, D-League, or the NBA. And it's hard not to be proud of that as fans.

"We know they came in undefeated and we were too," Clark said of the game's intensity. "And we wanted to come out and compete. That's the kind of organization the Warriors are – they wanna win and make sure we finish the job."