Share All sharing options for: Marco Belinelli, summer league hype, and the search for realistic expectations 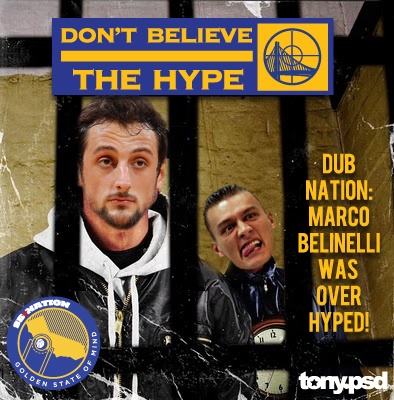 There are a lot of directions you could go in to discuss the most hyped Golden State Warriors player in recent history, including but not limited to Mike Dunleavy, Anthony Randolph, or Chris Webber.

But Tony.psd's artistic rendering of Marco Belinelli for SB Nation's NBA Most Hyped Day just sort of sealed the deal before I was fully done deciding upon.

There are three things that made the Belinelli hypefest stand out compared to other hyped up incoming Warriors: the intrigue surrounding a foreign player who many people had spent more time reading about than watching, the summer league explosion, and the rave reviews (initially) from Hall of Fame Warriors coach Don Nelson.

Back in July, J.R. Wilco of SB Nation's Pounding the Rock sent out a message requesting some background on Belinelli shortly after he signed with the San Antonio Spurs. J.R. did a pretty good job of summing up all of that initial hype - with the help of some old GSoM posts - which included a short comment of reflection from Poor Man's Commish that might be helpful in thinking about whether he ever lived up to that initial hype.

Granted, all of this happened before Don Nelson reduced Marco's psyche into that of a pigeon! Honestly, I think this is a case where one bad coach derailed the potential of young, fragile-minded up-and-comer. Belinelli really did impress me 6 years ago at Summer League. I still believe what I saw.

Some music for those who missed Tony.psd's Public Enemy reference.

There's probably not much need to detail the extent to which Belinelli failed to meet expectations as a Warriors. But to PMC's last point there, what he saw wasn't totally off-base either.

Similar to what PMC saw then, I wasn't expecting Belinelli to be "a one-dimensional pure shooter" - what I was hoping for was the player who could work without the ball to get shots but also help a team with his ball handling and penetration abilities. In that sense, the realistic projection - even based on his scoring outbursts during summer league - was probably closer to how Ricky O'Donnell of SBN's Blog a Bull described his tenure in Chicago:

Belinelli wasn't as good or valuable as Korver, but he did do certain things better. His ability to handle the rock and act as a primary ball handler in late game pick-and-roll situations really helped out if only because there were so many times no one else on the Bulls could handle such a duty. Belinelli only hit 79 three-pointers compared to Korver's 189 in Atlanta, but he was still second on the Bulls behind Nate.

Even that description probably fails to meet what I expected, but as an 18th pick he hasn't ended up being a complete bust either (especially when you look at who else was selected in that draft). And for a Spurs team that has an actually coherent system, it's not unreasonable to believe that he could be a contributor if never the "sensational" player that tickled Nellie's imagination.

We don't need Belinelli as a cautionary tale of why not to read too much into summer league performance - the Warriors franchise alone has enough of those. But Belinelli's career is probably an example of the need for patience with young players and how important it is for a young player to be in a situation where he can play to his strengths rather than being crammed into someone else's vision of what he can become.

For more hype from around the NBA, check out SB Nation's NBA Most Hyped Day section.