Based off their current 3PM/G, I predicted each of the 3 point leaders totals for the end of the season. Despite averaging a would be record breaking 3.4 3PM/G, Curry would fall just short of his record and tie Ray Allen for second place. However, as Curry's last 30 games show last season show, this may not be an accurate depiction as his predicted finish was 241, but he finished with 31 more 3PM than expected. 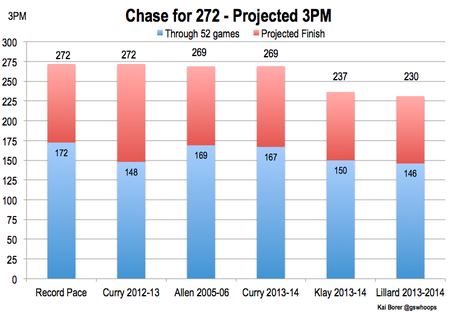 This shows the 3PM over the whole season thus far. Each of the top three players have had a stretch where they have lead the lead in 3PM, with Klay starting off hot, Lillard catching fire in the middle, and Curry opening a lead now. Despite the fact that Curry has a 17 three lead on the second place Thompson, Klay still has more three's than Curry did at this point last year and Lillard is only 2 three's behind. Curry was 24 threes short of the record pace with 30 games left last year, but he was able to catch up due to an amazing end to the year.Values through 52 games: 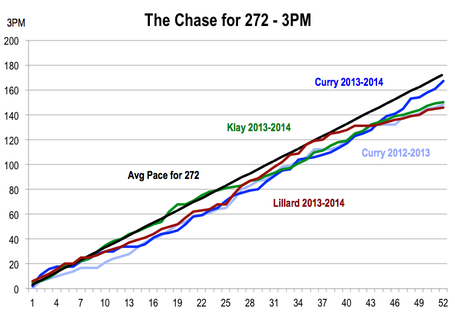 Over the last 15 game, we can really see how Curry is starting to run away with the 3PM race. He has opened up a 17 three lead on 2nd place Klay, despite being at the bottom of the leaderboard only 15 games ago. This has brought Curry within 5 of the record pace, and way above where he was at this point last year. Meanwhile, Thompson has been pretty consistent over the stretch, and Lillard has been really struggling from deep.

Three's made over last 15 games 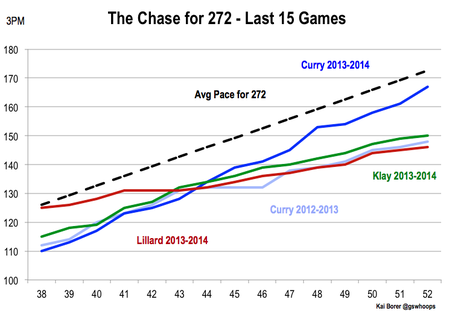 It's pretty evident that if the 3PM record is going to be broken again this year, it will be by Curry. This graph depicts his season this year and last year against the average pace to get 272. Curry is only 5 threes behind the record, closer than he was at any pointer last year. This again shows how amazing Curry was to finish the season and break the record, averaging a ridiculous 4.9 threes per game over the last 9 games (including 9 in game 80 and 7 in game 81). 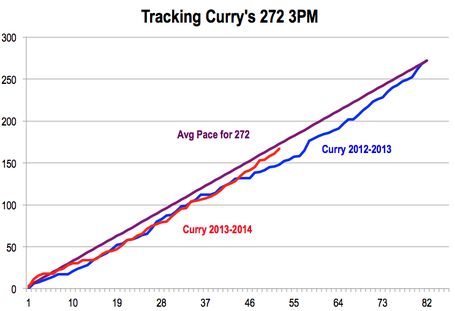 In this graph depicting 3PA, you can clearly see how much more the volume three point shooters are shooting this year compared to Curry's record season last year. Curry has attempted 408 threes so far this year, something that took him 8 more games to achieve last year. Every player has already attempted at least 30 more threes than Curry had through 52 games last year. 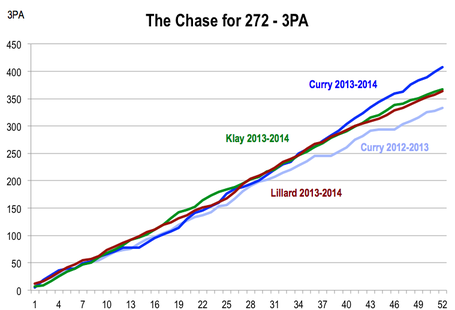 This graph charts the 3 point percentage over the first 52 games of the season of Curry's record season last year and the three leaders for 3PM this season. Curry last year was shooting a much better percentage than any of the large volume three point shooters this year, making his season last year even more impressive. 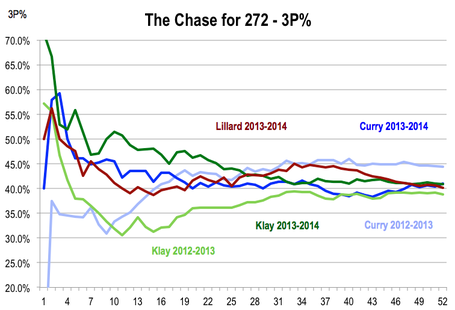 The average number of made threes per game throughout the season is displayed here. This is useful to find trends in how the shooters have been from three throughout the season. For example, you can see how Curry has picked it up recently, raising his average consistently over the last 15 games. You can also see how far below Curry was last year through 52 games, before averaging 4.1 3PM/G in his last 30 games. 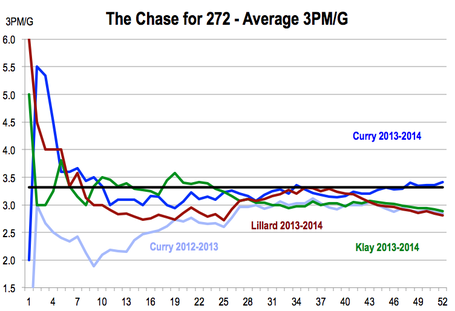 This graph displays Curry's record season last year vs. Ray Allens previous record. Allen started off better than Curry but a 4 game stretch where he missed 3 games and didn't hit a three in another hurt his progress and left him similar to where Curry was last year as well. 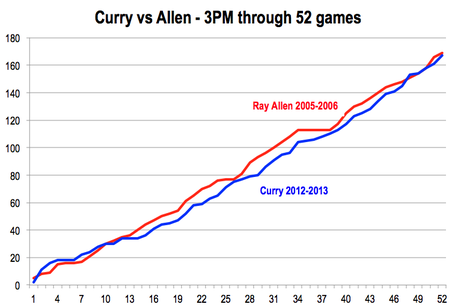 As always, any recommendations or critiques are welcome and preferred. Thanks for the good ideas!