Preview: Golden State Warriors at New York Knicks. Looking for a repeat of our last visit, but for one tiny detail...

Share All sharing options for: Preview: Golden State Warriors at New York Knicks. Looking for a repeat of our last visit, but for one tiny detail...

Let’s not bury the lead here. Our Golden State Warriors are heading into Madison Square Garden, and we all have one thing in mind:

Almost a year ago to the day, Stephen Curry gave the finger to his doubters and snubbers while submitting his pre-approved ballot for the 2014 All Star Game by dropping 54 points on the New York Knicks in their own building. He played all 48 minutes, hit 11 of 13 bullseyes from three point land, dished seven assists, pulled six boards, stole the ball thrice, and shimmied his way to stardom.

You know what else happened? We tend to forget these things:

I remember thinking at the time, “Ah the hell with it — that Curry firebomb was so crazy awesome that I totally don’t mind the loss. After all, the Knicks are at home, and they’re a good team — can’t win ‘em all!”

Times they have a’changed. Well ok: if Steph goes for 64 and they lose, I might say the same thing. Anything less and I’ll just be disappointed and worried. Because we’re not walking into that building under the same circumstances: we’re three games better than last year’s team at that time*, while the Knicks are 13 games worse. We finished last year with the 14th ranked defense, and this year we’re sitting at third in the league. And tonight we have Andrew Bogut starting at center, while last time we played at MSG we started this guy: 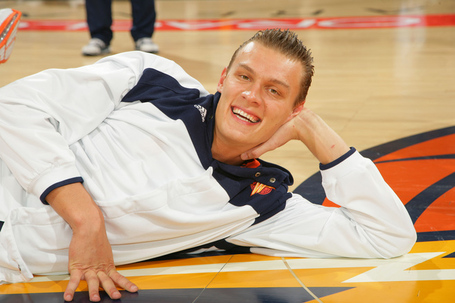 (Sometimes I have to wonder: if Andris kept the spiky hair and just played games in that hideous Thunder-era jersey, would we still be touting this Tony.psd gem?) 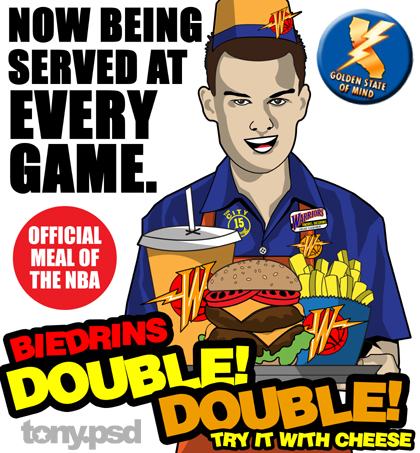 So yeah, this definitely feels like a “should-win” game. That feeling is amplified by that behind-the-woodshed treatment Joakim Noah and the Chicago Bulls served up on Wednesday, a game in which their second ranked defense made our third ranked defense look rank and defenseless. Depressingly without Derrick Rose and having traded defensive stalwart Luol Deng, I think there’s a tendency to assume that the Bulls are in the tank; but even if they are, Tom Thibodeau’s crew apparently still has the juice to make you look stupid and useless.

Nonetheless, the Warriors were nearly back to #fullsquad status, and coming off four straight wins. We had high hopes. They were thoroughly dashed, thrashed, bashed, smashed, all those -ashed words. This brings me to my * above — it’s hard to believe that this Warriors team, with such better personnel and another year of gelling, is a mere three games better than last year’s team that was without Bogut and Andre Iguodala, but then you get tossed around like a ragdoll by the Bulls and you say to yourself, “Oh, yeah — maybe we’re not there yet.”

But was that loss the end of the world? Did it tell us in certain terms that the Warriors aren’t good enough to be a home-court seed in the playoffs? Well, no — those overreactionary ultimatums are fun, especially if they bear fruit for your bombastic ego and let you boast I-told-you-sos to people who think you’re annoying — but single-game outcomes don’t make great hat racks. Especially if you’re trying to hang it on a Thibodeau team.

But ass-whoopings still sting. And so, we turn our minds to the memory of Stephen Curry setting fire to MSG, which is easier to remember as Stephen Curry doling out the ass-whooping than it is as a close loss to a Knicks team that people still believed in. This isn’t a must-win, but it is a should-win, or at least a please-god-let-them-win. And if they come away with the W, I won’t even be mad if Curry fails to break 50. Like, 45 would be fine.