Damn it feels good to be playing at home again. We're back at it with our third straight game hosted at the Roaracle. Our Dubs are set for a great match up tonight against our ol' pal Monta Ellis and the Dallas Mavericks. Golden State is gunning for their 5th straight win: Lets get it done Warriors! 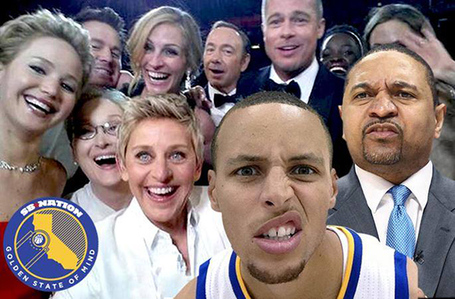 Team effort: With Curry playing limited minutes due to a quad (right side) injury, it's going to take a team effort similar to Sunday night's game to keep the momentum going. David Lee & Klay Thompson have been putting up strong numbers these past few games.

Expose Dirk's shooting struggle: Nowitzki has been having a bad shooting night as of late (3-14 this past Sunday). If we can apply that extra defensive pressure, he's in for long night.

X-Factor Number 1: Klay Thompson. Splash Brother #2 has been heating up as of late. 22 points (that included 4 from the 3-point line) against the Suns on Sunday and a great performance on the road. If Klay can bring his A-game tonight we should be in good hands.

X-Factor Number 2: The home crowd ruckus. It's always been a great time out at the Roaracle, no question. Chasing win number 5 makes it just as exciting! Expect a rowdy crowd tonight with noise being a factor for the Mavs.

- Epic performance from Mr. "WCW" himself, David Lee. Predicting a 20/10+ double-double. A Triple-D would be just as nice!

- Klay Thompson is finding his groove. Expecting an insane shooting night to compliment our starters performance.

- Mr. "Doin' Dirty Work" Draymond Green will be putting up some good numbers. Warriors down by 10-12 points? Ain't a problem that Dray can't fix, he can do it in the mix!

- Stephen Curry's performance tonight maybe limited but anything is possible! Take your pick, he could be a huge factor in the assist category.

- Curve ball: Monta has a career high against his former team, but still can't close out. Dubs win by 5!