Stephen Curry and Klay Thompson combined for 64 points to help dig the Warriors out of yet another hole and come back to win 113-112 in Portland.

Tonight ended up being yet another thrilling, come-from-behind, emotional rollercoaster of a win that reminds us that this team has enormous potential when they're able to get out of their own way.

In an almost exact reversal of fortune from Friday night's ugly loss at home to Cleveland, the Warriors shot 58% from the field in the fourth quarter and turned up the defense to come back from a dismal first half and get a 113-112 road win over the Portland Trail Blazers.

Warriors now a GAME AND A HALF behind Portland for the No. 5 seed

Key statistic: Splash Brothers shoot 9-for-17 from beyond the arc in the second half

Shortly after Oakland native Damian Lillard hit a jumper to put the Blazers up 18 around the seven minute mark, Curry started to find a rhythm for himself and went on a personal 6-0 run to reduce the lead to 12. After helping the Warriors get the lead down to just eight points heading into the fourth quarter, Thompson came through with some of the most well-rounded basketball we've seen him play to score 15 of his 27 points in the final period.

On the offensive end, Thompson was brilliant in the fourth quarter, shooting 3-for-5 from the three point line, helping to loosen up the defense by attacking the paint instead of settling for jumpers, and getting himself to the free throw line for six attempts. Defensively, he once against assumed the responsibility of locking down an opposing threat and helped to hold Lillard to just 3-for-12 shooting in the second half, despite a rather obvious lapse on a backdoor cut (and vicious dunk) with under a minute left.

But no two shots were bigger than Thompson's pair of threes in the final minute, including the game-winner from the left wing off a smart swing pass from Harrison Barnes.

It was a game that had all the drama, heroes, and pure force of will that you could possibly want from a pro game in March.

And yet, it just shouldn't keep coming down to this.

What's still so frustrating about this game even as we celebrate the win is that we have to deal with these nearly unwatchable lows in order to produce these thrilling highs - whether you want to ascribe resilience to this performance or not, it remains impossible to know what to expect from this Golden State Warriors team anymore on either a game-to-game or quarter-to-quarter basis.

The Warriors had just six assists in the first half and a second quarter shot chart that reflects continued chaos on the offensive end, with both panicked shot selection and an inability to finish at the rim. 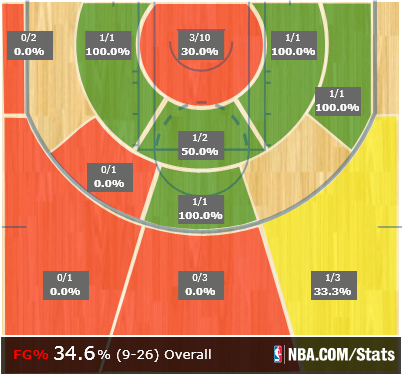 Deepening the hole they were shooting themselves into was Portland shooting 50% from the field in the second quarter, including 4-for-7 three point shooting to take a 55-44 lead into halftime. It looked like more of the same from Friday night - meaning poor rotations, slow close-outs, and general confusion due to mismatches - after we were all hoping for more of the beautiful, team-oriented play that had people around the nation so excited about this team earlier in the season.

And once again, for better or worse, it was Curry that really catalyzed the comeback.

Klay Thompson's clutch play is certainly what sealed the deal, but more importantly that game-winning play was an important divergence from the type of ball the team was playing in the first half: Curry drove to the basket, Barnes made the extra pass, they kept good spacing in transition, and Thompson found himself wide open for a shot after effortless finding a gap in the defense. They looked like a unit in the fourth quarter rather than a group of individuals freelancing and hoping for the best as though possessions are an infinite resource.

And there probably wouldn't even have been a game-winning shot attempt without Curry refusing to let this game slip away in the third quarter.

After going scoreless in the first quarter, Curry scored 11 points in the final six minutes of the third quarter. His four second half assists and willingness to probe (a little recklessly, at times) change the entire rhythm and flow of things for the Warriors offense. But he got emotional once again, seemingly impressing himself by the ease with which he navigated the court at one point, and the team just fed off of that.

Curry is just a luxury that most teams don't have, making teammates better not only by stretching defenses and setting up quality scoring opportunities but also just giving the unit hope that they're always within striking distance even when things are going their way.

Thompson is going to get quite a few of the headlines given his cold blooded play in the fourth quarter and Portland roots, but it was Curry who further established himself as the type of superstar who can will his team to victory when the odds are not moving in their favor.