This is the start of an epic war.

Just 3 years ago I don't think anyone in their right mind would have predicted that the hottest first round matchup in the NBA Playoffs would be Warriors vs Clippers. For anyone who laughed and cried through the Cohan era of Warriors basketball or the Sterling era of Clippers basketball (oh wait he's still around), this is truly amazing- unthinkable even.

Here's my take on this series from the GSoM staff's Golden State Warriors vs. L.A. Clippers predictions:

Let's dig into the history books...

It's funny when you think about it, but the Golden State Warriors have not lost a first round playoff series in over 20 years. (Take that San Antonio Snores!) That was Chris Webber's rookie year when mastermind Don Nelson assembled what many thought was a contender for the next 10 years with CWebb, Latrell Sprewell, Tim Hardaway (injured that season), Chris Mullin, some guy they traded Hall of Famer Mitch Richmond for, and crew.

So coming back to the present day--The Warriors will be severely outcoached. They will be dominated on the glass if Andrew Bogut is out the entire series. They will drive Dub Nation nuts with silly turnovers that painfully fuel Lob City highlights.

BUT-- Stephen Curry and Klay Thompson will catch fire from downtown. David Lee will be good for 20-10 every game in this series. Andre Iguodala will dominate defensively. The bench squad of Steve Blake and Jordan Crawford will make everyone forget about two former Warriors who for all the hoopla (some deserved) aren't even in the playoffs this year. Jermaine O'Neal will turn back the clock for stretches and continue his stellar defensive effort. Draymond Green will get under the Clipper's skin. Harrison Barnes will start his Mr. April campaign. Shoot, imagine what will happen if Bogut can battle the odds like Lee last year in the playoffs and give the Warriors some good minutes.

Speaking of predictions and history here's some more fun at the expense of our friends at ESPN: 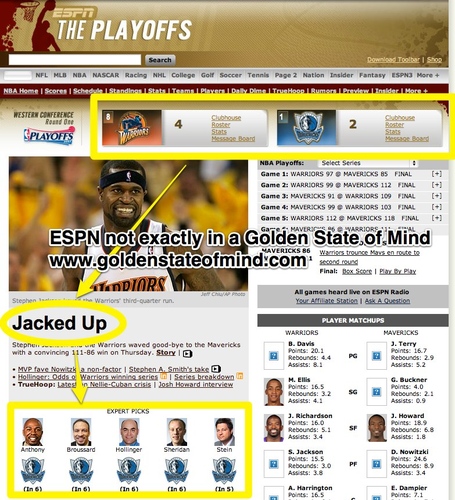 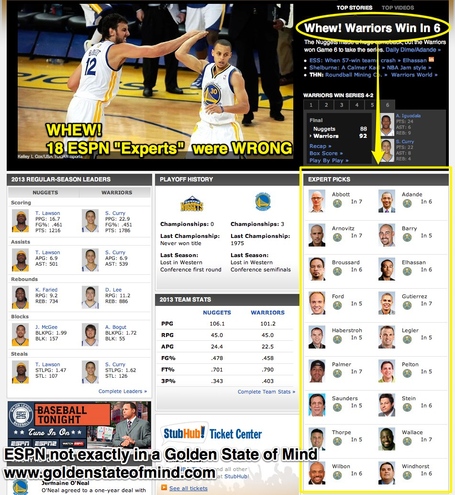 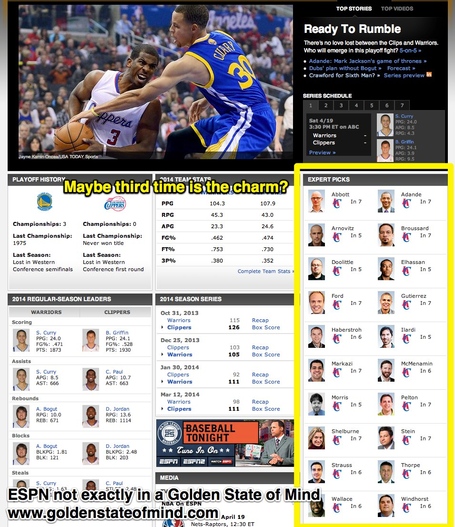 Congrats to bobbita, wwiwatt, newton, tarantado55, cjsdaddy, klaymation and GrilledCheesus for coming up big in our regular season contest!
See: Golden State of Mind Start Four Contest Winners!
But now it's PLAYOFF TIME!
Here's my 4 for today:
Don't forget to make your picks in the Golden State of Mind Group on Start Four!

Indeed, I am quite excited to cover the 3rd playoff series in GSOM's fine history. Now over the years, I've been called many not-so-nice things for my analysis of the Warriors and their many mishaps. But for some reason, every time the Warriors are in the playoffs I find myself in straight homer mode. I just can't help myself and I don't want to either.

So please say it with me...