The Warriors pulled off a surprising Game 1 victory that probably can't realistically be duplicated. But what might we be able to take away from the game anyway?

Share All sharing options for: 2014 NBA Playoffs: Three lessons from the Golden State Warriors' Game 1 win against the L.A. Clippers

Eddie Maisonet of SB Nation.com wrote an article prior to Game 1 yesterday calling for us Golden State Warriors fans to take solace in the fact that we not only have the most exciting team in the NBA to root for but also the team that nobody wants to face in the playoffs.

His point is both well-taken and well-reasoned, but - totally speaking from a place of emotion - yesterday's game embodied exactly why there has been so much frustration among Warriors fans this season: the Warriors stole that Game 1 victory despite another slow start, 23 turnovers, and at least one Klay Thompson iso too many.

The flip side, to Maisonet's point, is that the Warriors managed to win 51 games in spite of these recurrent flaws this season and yesterday's 109-105 win was just an extension of that success-in-the-face-of-weakness.

Perhaps tempering the excitement over that win is the fact that Game 2 will definitely be a different game, which could lead to a less satisfactory outcome: while we look forward to seeing Andre Iguodala in the game for more than 20 minutes, the Clippers will have Chris Paul and Blake Griffin back in action.

With the Clips still at home, it's probably safest to assume that the series comes to Roaracle knotted at one game apiece. But there are some things we can take from the game anyway.

The Warriors played solid defense for stretches of the game

It's still weird to think about a Warriors' defense carrying them to the extent it does, but the Warriors hit all the right notes defensively in Game 1.

While the offense really got going in the third quarter, their defense shut down the Clippers for long stretches in the second quarter to keep them in the game while both Iguodala and Lee were on the bench. While the job Draymond Green and Klay Thompson did on Paul was crucial - in addition to Paul's wild attempts at drawing fouls early on, which still boggle the mind - the Warriors' ability to force the Clippers into mid-range jumpers and away from exploiting a perceived advantage in the paint was critical to the Warriors fighting their way back.

If the Warriors can continue to defend the paint and push the Clippers into the mid-range as well as they did. 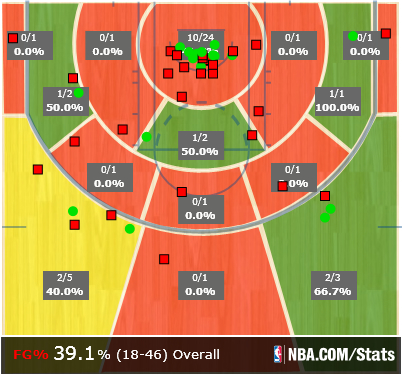 The Clippers' first half shot chart in Game 1 of the first round of the playoffs.

Again, that could change once the Clippers look to make adjustments and Griffin is in the game longer, but Zach Lowe pointed out in his preview of the series that it was the approach the Warriors would take and they did exactly that. And it was difficult at times to parse the difference between good Warriors defense and terrible Clippers decision-making - the Clippers should be expected to look less discombobulated with both Griffin and Paul back in action. Bur there's also the DeAndre Jordan factor when they do try to establish Griffin in the post.

The fundamental goal of any defense is to make the opponent uncomfortable and, adverse circumstances aside, they did that well enough to put themselves in position to win despite the Clippers' bloated 104.8 defensive rating at the end of the game (that will happen when you give a team 17 points off 23 turnovers and 18 fast break points).

Part of the explanation for the rebounding success would certainly be the absence of Blake Griffn due to foul trouble - with him out and DeAndre Jordan only able to do so much, the Warriors weren't quite as disadvantaged as they might otherwise have been. In an ugly second quarter in particular, the Warriors beat the Clippers on the offensive boards 50% to 29%.

David Lee's team-high 13 makes him stand out as the biggest contributor in the box score, but a lot of it was simply good fundamentals in actually boxing out and the activity on the board for everyone on the roster. Considering that this is a team that has suffered from major lulls in energy - and came out yesterday in that mode - the commitment to rebounding across the board is extremely encouraging.

Yet something else that can't be overlooked is the role of the Warriors wings in just being more active on the boards to help tilt the balance in their favor. Harrison Barnes (8), Draymond Green (7), and Klay Thompson (7) all rebounded their position well, which helped the Warriors' rebounding presence.

Harrison Barnes is finding a rhythm

Staying with the rebounding theme, Barnes' activity on the boards resulted in eight rebounds and for all of the talk from his remaining supporters about how valuable his athleticism is to projecting his potential, rebounding is one contribution that it would be great to see more of from him - his effort on the offensive boards in the final 10 seconds of the first half resulted in free throws that allowed the Warriors to go into halftime tied at 52.

Scoring-wise, Barnes has always been a better shooter when he gets his feet set to shoot the ball in rhythm and on balance and his big three with 1:47 left probably best represented that. But even when he wasn't knocking down the shots, he was getting himself the type of opportunities that make sense rather than wildly charging into the paint or shooting wild shots.

But the best sign of hope might've been his pass to a cutting David Lee during the Warriors' big third quarter run: sometimes it's just a matter of being a bit more patient and letting the game come to you rather than going for the homerun and Barnes showed more of that yesterday than he had throughout the season.

Now let's not go too wild, though some clearly can't resist - Barnes has still got to shoot better than 4-for-11 for the field before we anoint him as the next-whatever-people-thought-he-was-in-2012; he's is not exactly an efficient scorer, but to expect him to become that this early in his career was a bit misguided anyway.

Yesterday's game was probably exactly what this team needs from Barnes in the short-term: a role player who can come in and fill in the blanks by rebounding his position well and playing off others offensively. They just need him to not hurt the team far more than they need him to be a leading playmaker and that seems to be something he's embracing more as of late.

In summary, Barnes can be a solid contributor when he's not rushing things and takes what the defense gives him. It's been a long time comin', but (some small) change done come.

Knowing when to say when

As well as the Warriors played (at times) it might not be worth spending too much time harping on isos but the ill-fated attempt at a Klay iso post-up with two minutes left was just (at least) one iso too many. Particularly baffling is that they attempted that despite carving up the Clippers in the P&R with such ease.

Doc talking now about issues LAC had rotating after trapping Curry on pick-and-roll. Lost them the game. GSW tore 'em up.

I'm all for diversity in offensive play calling and distributing shot attempts across the roster to keep an opposing team off-balance. And isos as one scoring tactic aren't a bad thing. But it's the over-reliance on them that can be so frustrating even after we know things worked out ok anyway - in the final two minutes they need to make a better decision than that to get out the first round, much less advance deep into the playoffs. And when they have another option - Curry going to work, turnovers notwithstanding - it just makes more sense to exploit it.

The isos are just a part of what the Warriors do and in a turnover-laden game, it's not all that surprising that a coach would look to do that just so they get a shot up instead of giving the ball away. But it's still painful to watch a play like the one we saw at the two minute mark.

Ultimately, Game 1 was a re-assuring sign that the Warriors might have a better shot at winning this thing than many of us expected if only because the Warriors showed that they still have advantages they can lean on despite the absence of Bogut. Even if it's different with Griffin and Paul in there, cutting down on those turnovers, continuing to rebound well and exploiting the Curry advantage will give the Warriors a fighting chance at the series.

For more analysis on Game 1, check out our Warriors vs. Clippers section.